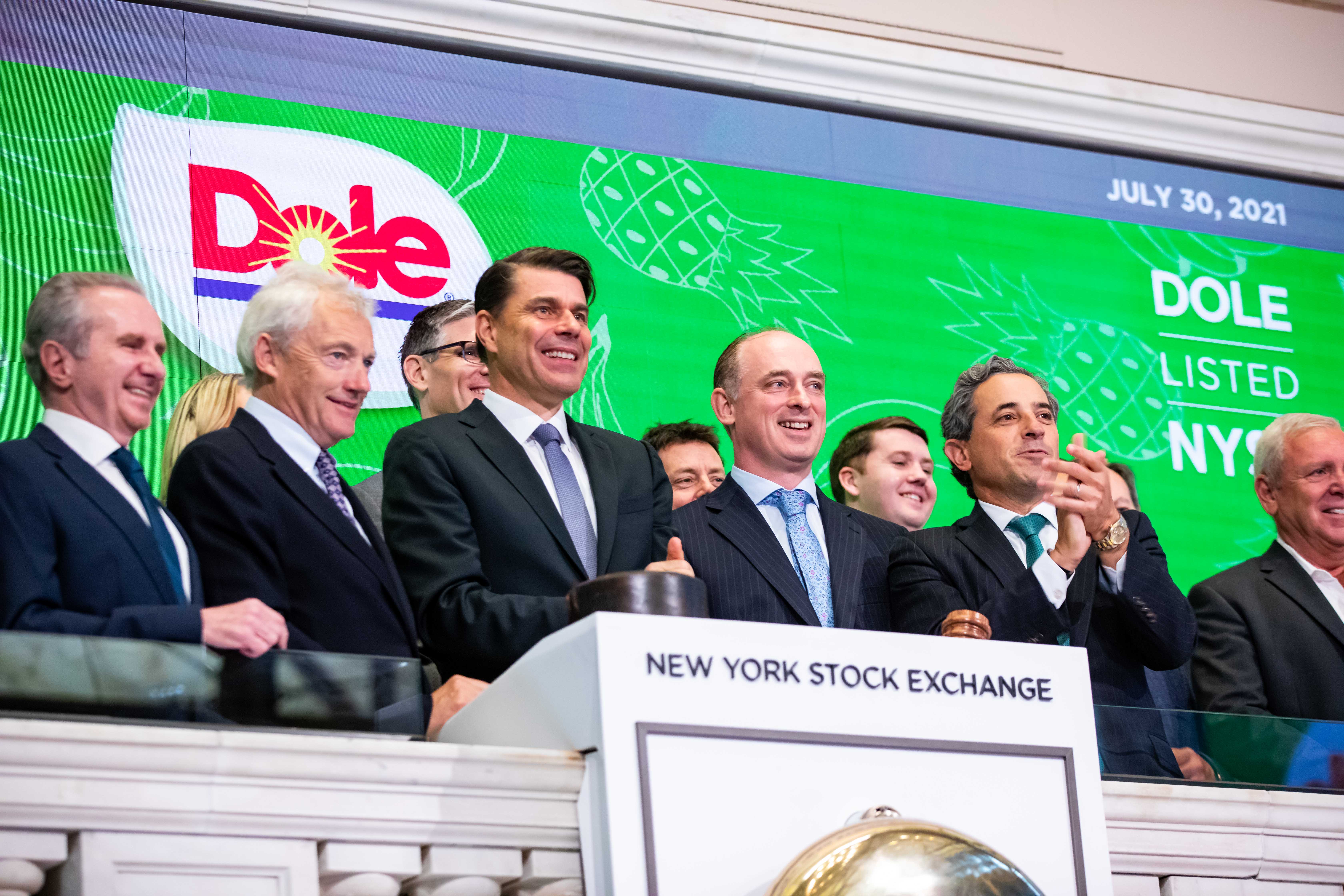 The New York Stock Exchange welcomes executives and guests of Dole (NYSE: DOLE), on July 30, 2021, in celebration of its Initial Public Offering. To honor the occasion, Johan Linden, Chief Operating Officer, Seamus Mulvenna, CEO Total Produce North America and Shane Power, Corporate Finance Director, joined by Chris Taylor, Vice President, NYSE Listings and Services, ring The Opening Bell®.NYSEShares of Dole closed Friday down more than 9% as the company made its return to the public markets.The stock opened at $15 per share, giving the company an implied market value of roughly $1.5 billion. However, the opening trade fell below its initial public offering price of $16, which was already on the lower end of Dole’s expected range. The stock is trading on the New York Stock Exchange under the symbol “DOLE.”The IPO marks the completion of Dole’s merger with Total Produce, creating the world’s largest fresh produce company. The two companies announced the deal in February. The IPO raised $400 million in gross proceeds for the newly formed company. It intends to spend the money on the costs of the merger and paying down its debt.In 2020, the two companies reported combined net sales of $8.97 billion, generating net income attributable to shareholders of $80.1 million. Dole Food accounted for a little more than half of the overall revenue.”The big advantage that we have is a huge diversity of sourcing capability,” said Dole CEO Rory Byrne, who served in the same position at Total Produce before the merger.Byrne said the company doesn’t expect to see any material impact stemming from the ongoing drought in California. As of March 31, it owns more than 109,000 acres of land around the world.Founded in 1851, Dole has twice before been publicly traded. Billionaire David Murdock, who is now 98 years old, last took the company private in 2013 for $1.3 billion. Five years later, Total Produce bought a 45% stake in Dole for $300 million.Despite a hot IPO market this year, Dole isn’t the only stock to see a frosty reception from investors. Robinhood made its public market debut on Thursday, closing down more than 8%.