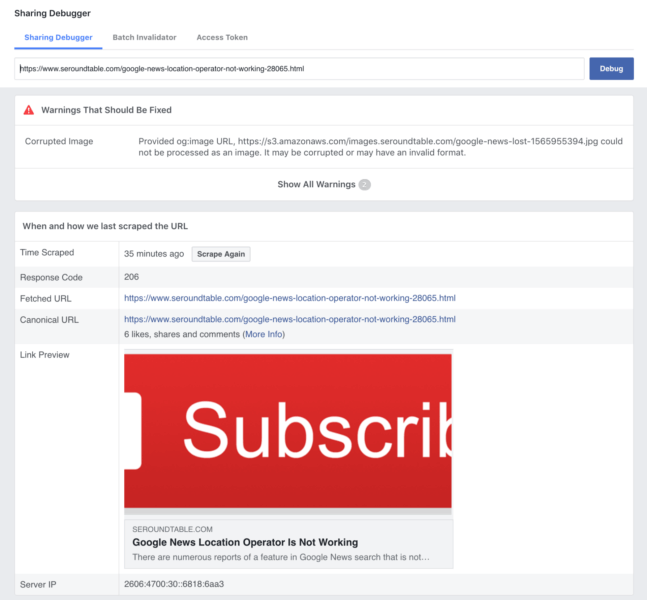 Have you had any issues trying to get images to load for organic posts on Facebook? Search Engine Land editor Barry Schwartz noticed images were not loading — or were being replaced with random images — when creating organic posts with links to stories he had written.

The problem: A corrupted image or platform bug? When Schwartz ran the HTTPS links through Facebook’s Debugger tool, he got a notice claiming the images connected to the URLs may be corrupted or were an invalid format. A thread on Stack Overflow covering the same problem dates back to 2012, but with entries as recent as four months ago.

The fix: Implementing an HTTP link instead. According to the thread, users resolved the issue by using an HTTP URL instead of HTTPS. One entry on Stack Overflow claimed Facebook was aware of the problem and, at the time, was looking into it. “I ran into the same problem and reported it as a bug on the Facebook developer site. It seems pretty clear that og:image URIs using HTTP work just fine and URLs using HTTPS do not. They [Facebook] have now acknowledged that they are looking into this,” wrote Keegan Quinn in January 2012.

Why we should care. For brands already struggling to gain traction with organic content on Facebook, a glitch that removes or replaces images from posts is one more obstacle. With the Facebook debugger claiming the error is a corrupted file, marketers may not realize that the problem might not be the image, but perhaps Facebook’s issue with HTTPS links.

This chef got Covid, got laid off and then became a homebuilder