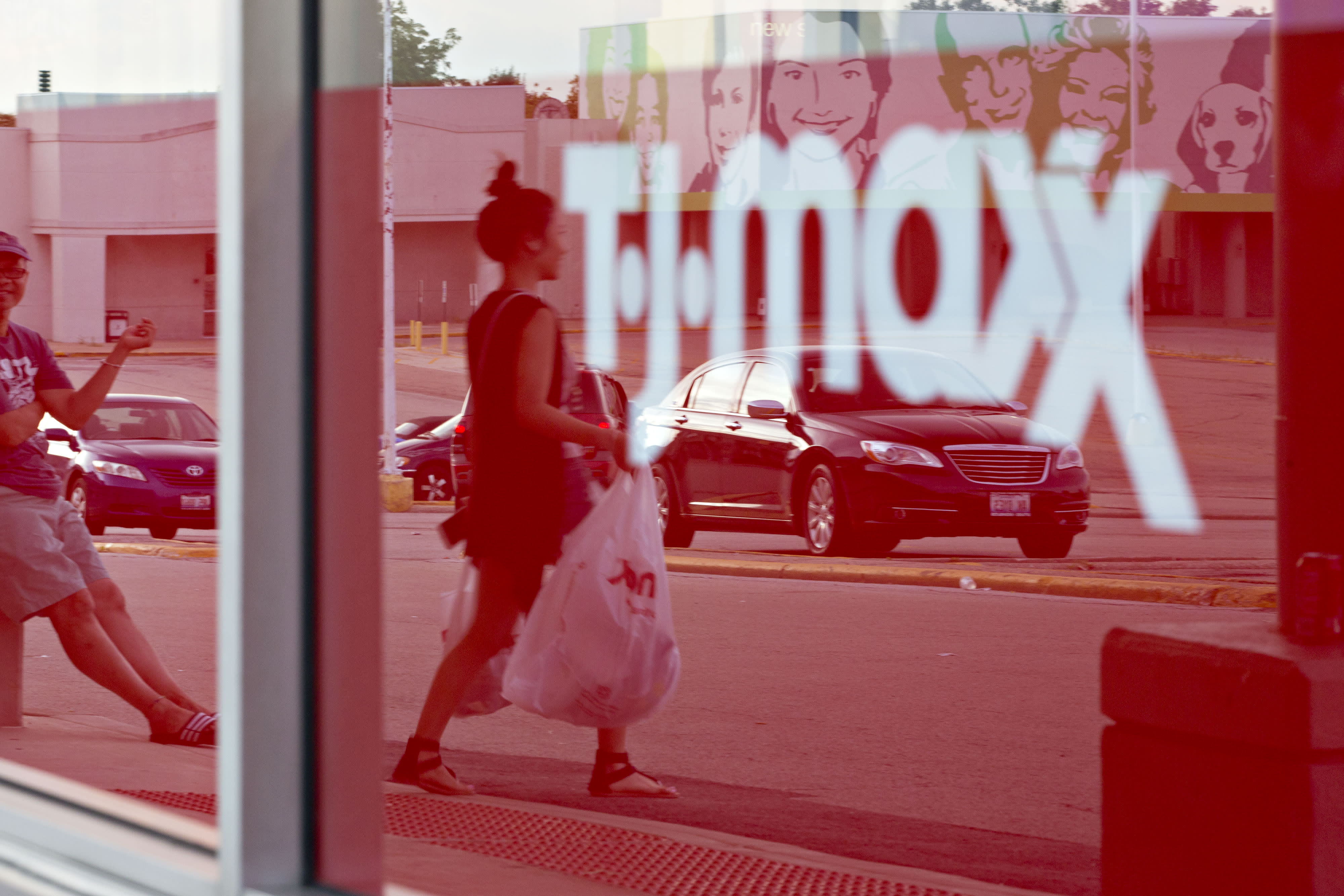 The reflection of shoppers are seen in a window at a TJ Maxx store in Peoria, Illinois.Daniel Acker | Bloomberg | Getty ImagesAny doubts about whether shoppers would return to discount retail stores to rummage through racks in the hunt for bargains were crushed this week when TJX Companies and Ross Stores reported their first-quarter earnings.Both companies’ sales surged past analyst estimates, as consumers started packing back into their stores to look for new outfits, shoes, luggage and home goods as pandemic-induced lockdowns eased.TJX and Ross cited a pent-up demand from shoppers, many of whom have been armed with extra stimulus dollars in recent months, but also a desire among many people to still look for good deals. So-called treasure hunting in stores could be something that many consumers end up craving more than they did before the Covid health crisis.”We believe the appeal of our entertaining, treasure-hunt shopping experience gives consumers a compelling reason to shop us,” TJX CEO Ernie Herrman said in an earnings conference call. “In-store shopping is not going away.””We see our stores as a desirable destination for consumers seeking some stress relief,” Herrman said, “and also a great place to shop when they are seeking inspiration and looking to discover new things, which is difficult to replicate online.””Our business model now resonates more than it even did pre-Covid,” he said.One year earlier, TJX’s net sales were more than cut in half and it swung to a first-quarter net loss, as the pandemic forced the company to temporarily close more than 4,500 stores in the U.S. and abroad. It was a devastating blow to the company, which relies on in-store shopping. TJX has a shoppable online platform for some of its brands, including TJ Maxx, but not all of them.Ross similarly swung to a loss in the year-ago period when all of its stores shut beginning March 20, 2020, through the end of the quarter.But this week, TJX staged a first-quarter comeback when it reported net sales that rose nearly 130% to $10.09 billion from $4.41 billion a year earlier, topping Wall Street estimates for $8.62 billion, according to data from Refinitiv. TJX is the parent company of Marshalls and TJ Maxx.Though its shares fell following its blowout quarterly report, that was largely due to the ongoing struggles the company faces outside of the United States. Due to Covid, TJX still has about 300 stores closed in Canada and Europe. And in the second quarter, TJX forecast its Canadian and European locations would remain shut for 17% and 7% of the period, respectively.TJX shares are down about 1% year to date.A pedestrian walks by a now hiring sign at Ross Dress For Less store on April 02, 2021 in San Rafael, California.Justin Sullivan | Getty ImagesRoss’ first-quarter sales more than doubled to $4.52 billion, compared with $1.84 billion a year earlier, beating Wall Street estimates for $3.87 billion.CEO Barbara Rentler said the company is particularly optimistic about its chance to grab market share from the growing number of retail store closures and bankruptcies that have transpired in the past few years. In addition to its Ross Dress for Less business, Ross also owns DD’s Discounts.For its full fiscal year, which ends on Jan. 29, 2022, Ross is forecasting comparable sales will grow between 7% and 9% compared with 2019 levels.Ross shares are down less than 1% since the start of the year.”We continue to expect ongoing [market] share grabs, believing that off price wins because they don’t have e-commerce, not in spite of it,” BMO Capital Markets analyst Simeon Siegel said.It’s true that these companies struggled more than other retailers during the pandemic due to their lack of presence online. The off-price business has traditionally been centered around the store experience, not the internet. Ross doesn’t have an e-commerce site. Discount chain Burlington Stores got rid of its website in early 2020.But now, as consumers are regaining the freedom and the confidence to leave the house and shop, that might not matter as much.”Hunting for a bargain and finding a bargain has come back with a little bit of a vengeance,” GlobalData Retail Managing Director Neil Saunders said in an interview. “I think the value segment could actually find themselves with a really nice influx of customers.”The upbeat results from both TJX and Ross led Telsey Advisory Group to raise its expectations ahead of peer Burlington’s earnings report, which is expected on May 27.For the first quarter of 2021, Telsey now anticipates Burlington will post per-share earnings of $1, up from a prior outlook of 62 cents. It sees net sales growing roughly 127% year over year, to $1.81.While it maintains an outperform rating on Burlington shares, the firm raised its price target in a note to clients Friday, to $370 from $320. Burlington’s stock had closed Thursday at $321.44, up about 22% year to date.Department store chain Nordstrom, which operates the off-price chain Nordstrom Rack, is also set to report quarterly financial results after the bell Tuesday.— CNBC’s Michael Bloom contributed to this report.