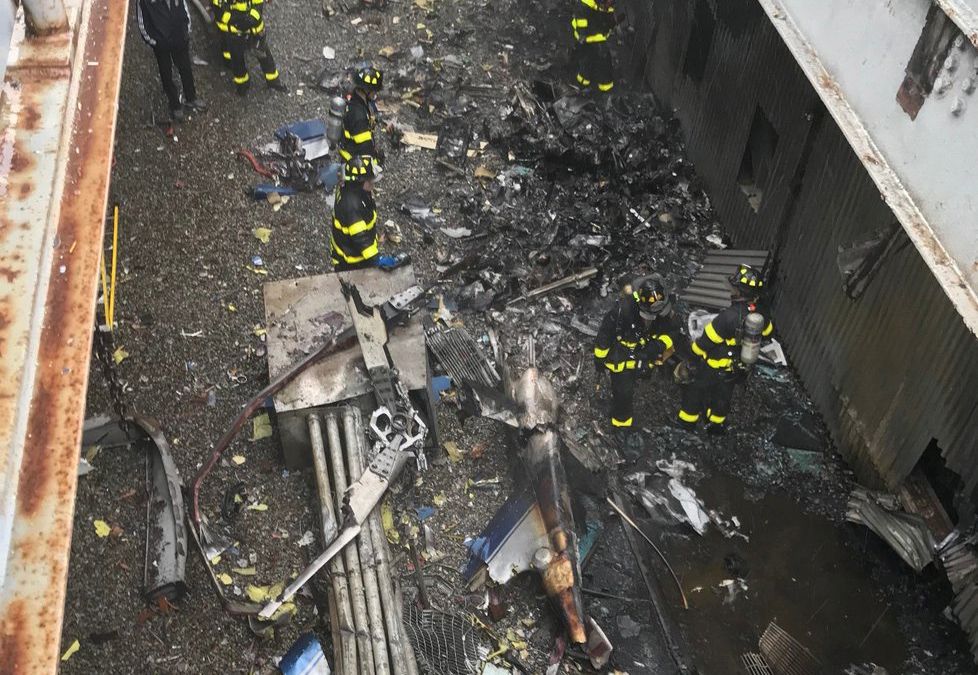 Emergency crews survey damage on a rooftop of a building after a helicopter crash in New York City, New York, U.S., June 10, 2019.

A helicopter crash on top of a Manhattan office building that killed the pilot and plunged midtown into chaos on Monday afternoon is raising safety questions about choppers flying in the densely populated city.

Federal officials said they are investigating whether the pilot, who was killed after his Agusta A109E helicopter crashed on the roof of 787 Seventh Ave. in heavy fog, violated any flight rules. The pilot was the sole fatality and only person on board the private helicopter.

Helicopter pilots usually contact the tower at LaGuardia Airport in neighboring Queens when they take off from the East 34th Street Heliport, where the helicopter that crashed reportedly took off. But the pilot did not make that contact and there isn’t a requirement to do so, according to a Federal Aviation Administration spokeswoman.

The helicopter was also flying in a restricted area, about a half mile from Trump Tower, according to the New York Police Department. The FAA had put restrictions on flights in that area after Trump’s election in 2016.

“Today, New York City experienced yet another deadly helicopter crash, this time, with our nightmare of having a helicopter crash into a building,” Maloney said in a statement. “We cannot rely on good fortune to protect people on the ground. It is past time for the FAA to ban unnecessary helicopters from the skies over our densely-packed urban city. The risks to New Yorkers are just too high.”

The pilot on Monday was flying in low visibility when most other choppers around the city had remained grounded.

“This was not a normal flight,” said John Goglia, former member of the National Transportation Safety Board. “I think he was struggling for control and to put it down but he couldn’t.”

The building does not have a helipad, according to officials. Helipads on buildings have been largely banned from New York rooftops after a helicopter’s rotor blade snapped off in 1977 atop what was then the Pan Am building, killing five people. Public helipads in Manhattan, of which there are now three, have been confined to the coasts of the island.

Helicopter accidents are relatively uncommon compared with other modes of transportation, but recent incidents have sparked calls for tighter restrictions.

After a tour helicopter crashed in the East River in March 2018, killing five passengers on board, Maloney and six other lawmakers wrote a letter to the FAA and NTSB to tighten safety regulations for tourism flights.

New York City officials in 2016 announced a plan to halve the number of helicopter tourism flights in the city to 30,000.

New York Yankees pitcher Cory Lidle and his flight instructor were killed in 2006 when Lidle’s small plane crashed into a 42-story building on the Upper East Side of Manhattan. Eighteen people were injured in the crash.

Some may think the market will soon top, but I’m not buying it