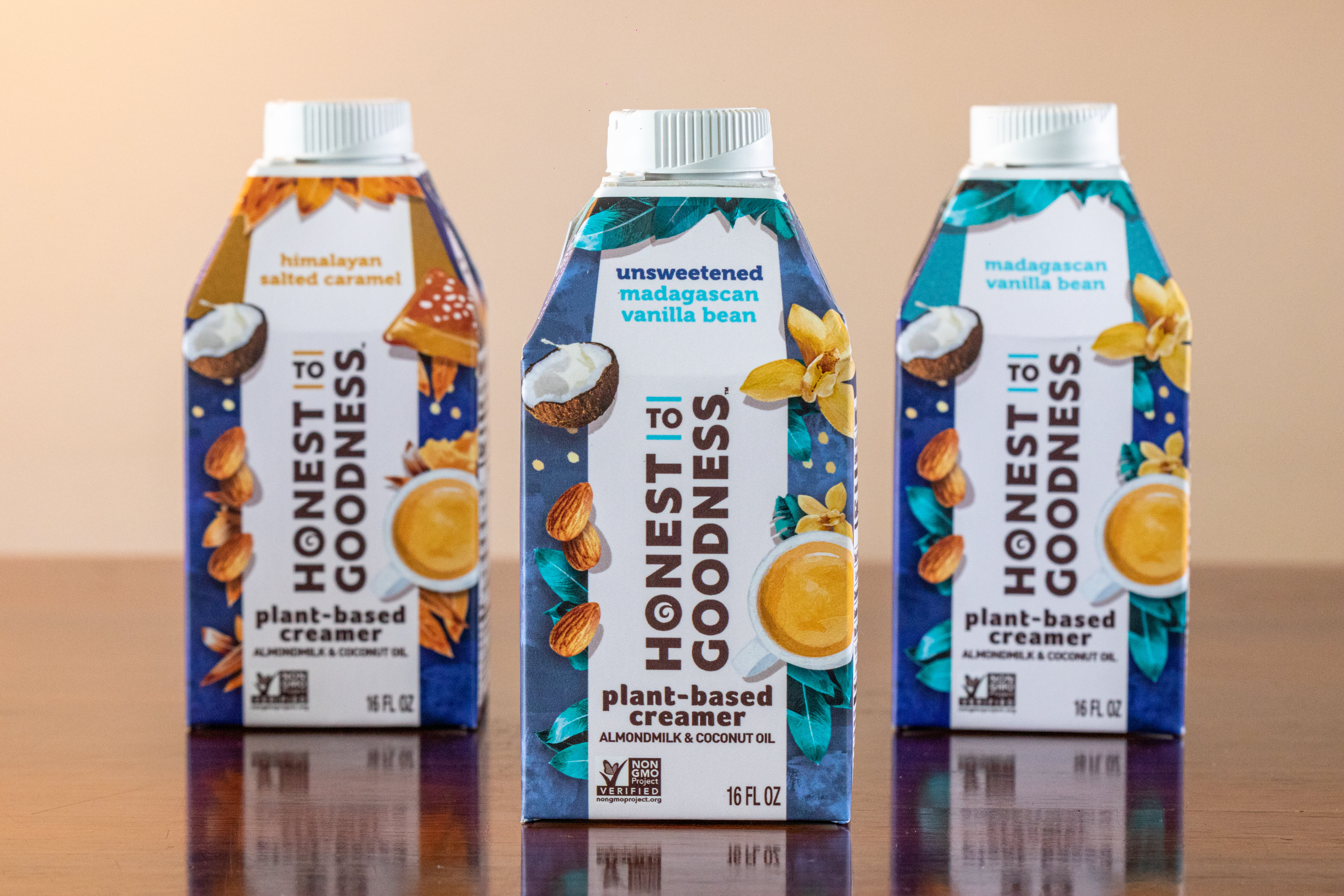 Honest To Goodness plant-based creamerSource: Honest To GoodnessDanone unveiled Honest to Goodness, a line of plant-based coffee creamers, on Monday, hoping to capture some of the growing demand for nondairy products as more consumers brew coffee at home.Gen Z coffee drinkers are guzzling about 28 billion cups of coffee per year, driving consumption in the category, according to Danone.These younger consumers are seeking out brands that offer transparency into their product sourcing and are sensitive to environmental issues, according to Olivia Sanchez, Danone’s North America vice president of marketing for coffee creamers.Millennials are also trying to use more sustainable products. Danone told CNBC that 75% of millennials shop with the environment in mind.This is one factor that has been driving sales of dairy-free coffee creamers. In the 52 weeks ended Feb. 20, sales are up 32% from the same period a year ago, according to Nielsen data. That’s a faster pace than coffee creamer category as a whole, which grew 18% during the same time period.Danone currently sells brands such as International Delight and Silk. But the category has seen new entrants such as Chobani and Oatly.Consumers are shifting to plant-based alternatives for many reasons, including lactose intolerance and environmental concerns. That’s driving up sales of plant-based dairy alternatives, which grew 21%. Almond milk, the ingredient in Honest to Goodness products, was the largest-growing dairy alternative, with sales up 16% in the same duration.”We know that plant-based is a trend, and it has amazing growth in the marketplace, and flexitarianism is on the rise. We see those shoppers wanting to lean into newer propositions and exploring what is in the plant-based set, and so Honest to Goodness is really designed for that consumer in mind,” Sanchez said.Flexitarian is a term describing people who consciously try to lessen their meat consumption for environmental or health reasons.Another factor boosting creamer sales has been increased consumption of coffee at home, which could ease when workers return to the office as the health crisis abates.”New routines mean Americans are drinking more of their coffee at home than ever, but many are also returning to coffee shops around the country or plan to do so soon,” said Bill Murray, president and CEO of the National Coffee Association.Darren Seifer, a food industry analyst at market researcher NPD Group, said many consumers purchased new coffee devices during the pandemic and that brewing at home could linger even as people return to work. The Honest to Goodness brand is also partnering with environmental organization EarthDay.org, in an effort to promote sustainability by planting trees in Madagascar, where its vanilla is sourced, and engaging with local communities as part of The Canopy Project.Its lineup will include three different flavors: Madagascan vanilla bean, unsweetened Madagascan vanilla bean and Himalayan salted caramel. The products will be available online first through Amazon and via grocery delivery service FreshDirect.Earlier Monday, Danone announced its CEO and Chairman Emmanuel Faber is stepping down, with Gilles Schnepp taking the role as nonexecutive chairman.Correction: Honest to Goodness will be available via FreshDirect. An earlier version misstated where it could be purchased.

Singapore and Australia airline stocks jump after talks on air travel bubble
Have vaccination, will travel — but not with the kids in tow
To Top
error: Content is protected !!