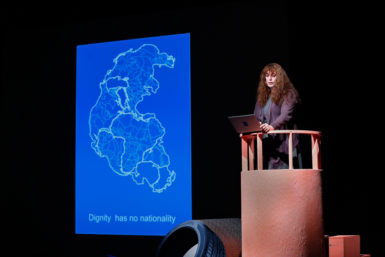 Tania Bruguera at the 2014 Creative Time Summit in Stockholm.

The Creative Time Summit—started in New York and expanded in the years since to Stockholm, Toronto, Venice, and Miami—is returning to the Big Apple for a 10th-anniversary series of events focused on injustice and resistance under the title “Speaking Truth: Summit X.”

The summit will kick off with a discussion of media and technology hosted by New Lab in Brooklyn on May 20. Moderated by Amy Goodman, the host of the news program Democracy Now!, the talk will include media artist and activist Morehshin Allahyari as well as artist and environmental engineer Tega Brain.

A discussion in June will examine economics and sovereignty, and another in September will take up topics related to health and gender. The summit’s finale, scheduled for November 14-16, will include lectures from interdisciplinary activists as well as workshops and “hands-on learning opportunities” facilitated by local organizations and artists.

Justine Ludwig, executive director of Creative Time, said in a statement, “For the past decade the Summit has been a cornerstone of Creative Time’s annual program—an opportunity for a meeting of the minds where we pause and reflect upon our current socio-political reality, take a hard look at the past, and envision a path forward. I am thrilled to celebrate the Summit’s tenth anniversary with a new, expanded format.”