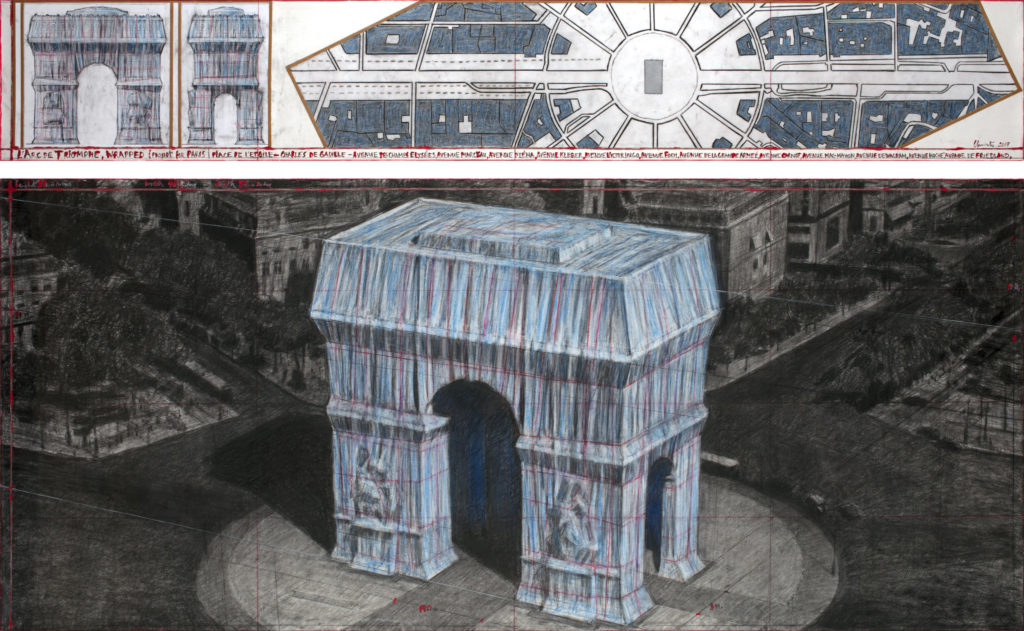 Christo has made headlines for decades for surrounding or wrapping various monuments and locations in fabric, among them the Reichstag in Berlin, islands in Biscayne Bay in Miami, and the Australian coastline. Now the veteran artist has set his sights on a new location: the Arc de Triomphe in Paris.

For L’Arc de Triomphe, Wrapped (Project for Paris, Place de l’Étoile-Charles de Gaulle), Christo will drape the iconic French monument in 270,000 square feet of blue recyclable polypropylene fabric and 23,000 feet of red rope. The work will be executed in April 2020, around the opening of an exhibition devoted to Christo at the Centre Pompidou in Paris.

According to a press release issued by the Centre Pompidou and Paris’s Centre des Monuments Nationaux, the institutions presenting the work in collaboration, the wrapped Arc will be financed through Christo’s sale of his preparatory studies for the project and prior works. A price tag for the work was not included.

In wrapping one of the French capital’s most noteworthy monuments, Christo—for whom the Parisian project will be the first wrapping project since the death of his partner, Jeanne-Claude, in 2009—is carrying on from pieces that serve as a formative part of his oeuvre. In 1962, the same year Christo famously erected enough oil barrels to obstruct the flow of cars and people along one Paris street, he made a photomontage of the Arc de Triomphe wrapped. Now it seems that image will become a reality, and it will look not unlike what Christo and Jeanne-Claude executed around Paris’s Pont Neuf bridge in 1985—a project that was the result of nine years of negotiations with city officials.

“Thirty-five years after Jeanne-Claude and I wrapped the Pont-Neuf, I am eager to work in Paris again to realize our project for the Arc de Triomphe,” Christo said in a statement.

The year-long interim between the work’s announcement and its planned realization is relatively short for Christo, whose works have often taken years to conceive and build. A proposal for an enormous mound of oil barrels intended for the desert in the United Arab Emirates—to be titled Abu Dhabi Mastaba—has been in the planning stages for four decades. But London Mastaba, a 600-ton scaled-down version of the work unveiled in 2018, took just two years to produce.