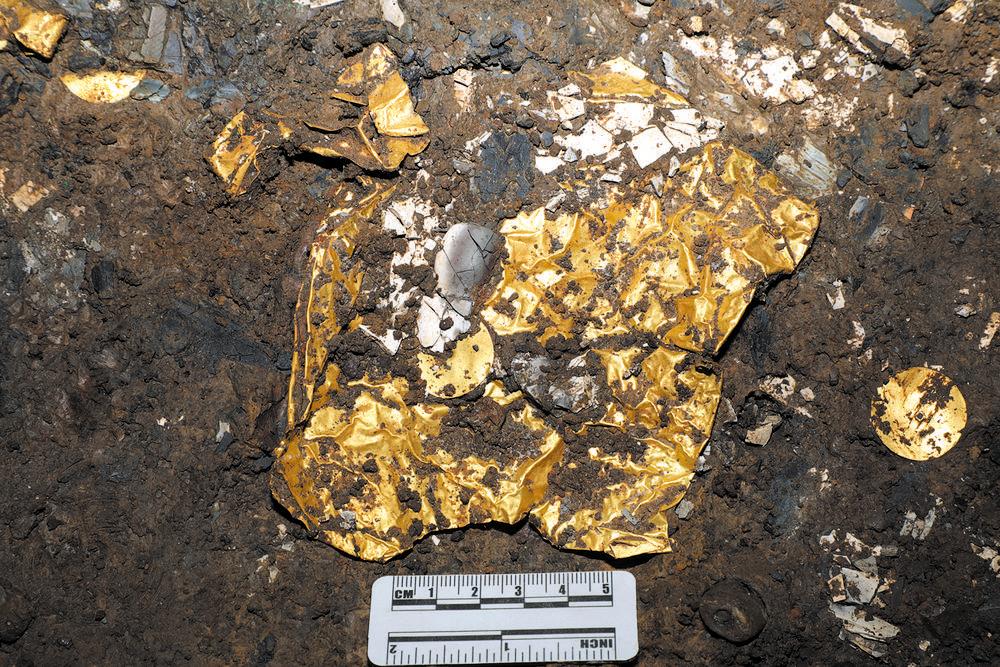 Since the 1920s, an archeological dig site in southwestern China has become a rich site of research and discoveries about ancient civilizations. Most recently, that site yielded new trove of some 500 objects, with many dating back 3,000 years. Among the most significant new finds is a gold mask that weighs just over half a pound and is estimated to be made of 84 percent gold, according to a report by CNN.
The mask was found in newly discovered “sacrificial pits,” as termed by China’s National Cultural Heritage Administration, at the Sanxingdui dig site in the Sichuan province near Chengdu after a several-year excavation hiatus at the site. Also included in the discovery were artifacts in ivory, jade, and gold, as well as an unopened wooden box and several bronze vessels, including one resembling a sacred tree and another with owl-shaped patterning.

A press release from the Chengdu government said that the gold mask may have been worn over a person’s face during certain rituals, but that further research and excavation was still needed. Part of a nationwide “Archaeological China” project, the Cultural Heritage Administration’s dig is part of continual research and study of the ancient cultures of the Sichuan-Chongqing region.
Many of the objects are believed to have been used in sacrificial practices from the ancient Shu Han, a kingdom that ruled the Sichuan basin until 316 B.C.E. Another major find in the recent discovery is silk that dates back to the Shu Han era. Its find supports theories that silk was an important part of spiritual rituals to the community and could prove that Chengdu was major production site of silk and a stop along the southwestern portion of the Silk Road.
“Although the silk found at the Sanxingdui site is not the oldest, such a discovery is still very exciting,” Zhou Yang, a researcher at the China National Silk Museum, said in a statement. “This time we found silk in the sacrificial pit. We are very happy to see that through archaeological excavations, we found that the function of silk has been elevated to a spiritual level.”
The recent discoveries at Sanxingdui are not the oldest archeological finds, as some have dated back to the 12th and 11th centuries B.C.E. Another major discovery at the site came in 1986, when two other ceremonial pits were found with over 1,000 items, including several bronze masks. Many of the previously found objects are on display at the Sanxingdui Museum, near the dig site, and the newly found ones are expected to also go on view there at a later time.

In a statement provided to the Chengdu government accompanying the recent finds, Xu Hong, the leader of a different archeological site looking into the ancient Erlitou culture said, “This excavation can further clarify the nature of the sacrificial pit at Sanxingdui site, understand the religious life and sacrificial tradition of the Sanxingdui people, and get closer to the truth of history.”