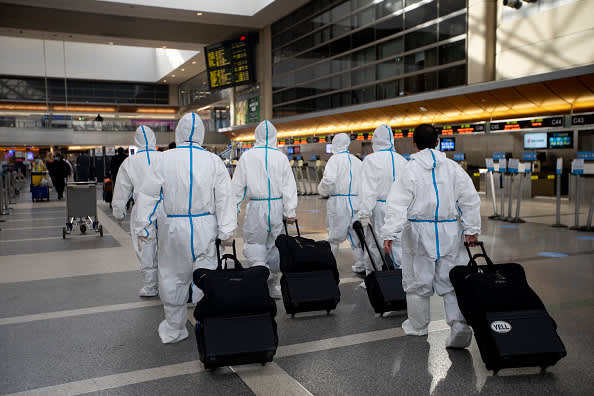 During the global coronavirus pandemica group of people wearing personal protective equipment walk in Tom Bradley international at LAX on Tuesday, Nov. 17, 2020 in Los Angeles, CA.Francine Orr | Los Angeles Times | Getty ImagesThe Centers for Disease Control and Prevention on Thursday recommended Americans against traveling for Thanksgiving to prevent the spread of the coronavirus.Dr. Henry Walke, CDC’s Covid-19 incident manager, said there is “no more important time than now for each and every American to redouble our efforts to watch our distance, wash our hands and, most importantly, wear a mask.””CDC is recommending against travel during the Thanksgiving period,” he said. “For Americans who decide to travel, CDC recommends doing so as safely as possible by following the same recommendations for everyday living.”Walke added that the CDC is concerned “about the transportation hubs.” He said he’s worried people won’t be able to maintain social distancing while waiting in line, for example, to board busses and planes.”We’re alarmed,” he said, adding that the country has seen an “exponential increase” in cases, hospitalizations and deaths recently.”One of our concerns is that as people over the holiday season get together, they may actually be bringing infections with them to that small gathering and not even know it,” he said, adding that 30% to 40% of spread is driven by people without symptoms.”From an individual household level, what’s at stake is basically increased chance of one of your loved ones becoming sick and then hospitalized and dying,” Walke said. “We certainly don’t want to see that happen. These times are tough. It’s been a long outbreak.”Dr. Erin Sauber-Schatz, CDC’s community intervention and critical population task force lead, said “we are asking people to be flexible,” adding that people who are visiting at-risk people should be especially careful. The officials added that the agency will be publishing new guidance Thursday on proper precautions to take during the holiday season.The CDC’s briefing Thursday is the agency’s first since August. Critics have called on the CDC and Director Dr. Robert Redfield to take a more high-profile position in the nation’s response to the pandemic as cases, hospitalizations and deaths all continue to rise.The comments come after the nation reported more than 170,100 new cases of the virus on Wednesday, according to data compiled by Johns Hopkins University. That’s the second-highest one-day spike reported to date.As of Wednesday, more than 79,400 people nationwide were hospitalized with Covid-19, more than at any other point during the pandemic. Hospitals in some parts of the country are overwhelmed, moving to surge capacity to provide care to as many patients as possible.As hospitals try to handle an increasingly large load of patients, deaths caused by Covid-19 are trending upward. The CDC updated its forecast for Covid-19 deaths earlier this week to say that “newly reported COVID-19 deaths will likely increase over the next four weeks, with 7,300 to 16,000 new deaths likely to be reported in the week ending December 12, 2020.”