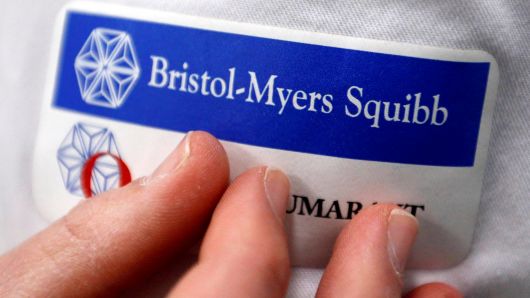 Logo of global biopharmaceutical company Bristol-Myers Squibb is pictured on the blouse of an employee in Le Passage, near Agen, France March 29, 2018.

The deal, announced in January, was hard sell to Bristol shareholders from the start and the approval concludes a tumultuous period for Bristol, which saw push back from institutional investors. The acquisition adds about $32 billion in fresh debt to Bristol’s balance sheet while assuming $20 billion in Celgene’s debt, the companies said at the time.

“We are pleased with the outcome of today’s Special Meeting and thank our shareholders for their support for this combination,” Bristol’s Chairman and CEO Giovanni Caforio said in a statement.

Buying Celgene was seen by Wall Street analyst as giving Bristol more cancer drugs at a time when its immuno-oncology portfolio struggles to keep up with rival Merck’s. Bristol’s blockbuster Opdivo, which boosts the immune system to attack cancer, has fallen behind its leading competitor, Merck’s Keytruda.

Starboard eventually ended its fight against the buyout once Institutional Shareholder Services and Glass Lewis recommended Bristol-Myers shareholders vote in favor of its bid.

Bristol said Friday the deal, which is expected to close in the third quarter of this year, will create a “premier innovative biopharma company with leading scientific capabilities.”

“We look forward to bringing the companies together, which we believe will deliver significant shareholder value,” Caforio said.