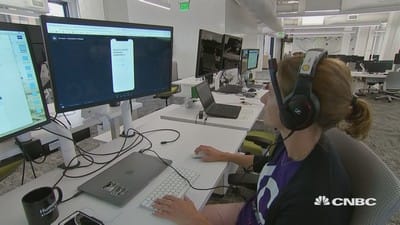 Humana’s new digital health hub in Boston has the look and feel of a tech start-up, and that is very much the point. The Medicare giant’s CEO has told his managers digital engagement has to be at the heart of everything they do.”We’re trying to bring different disciplines together to wrap around the whole idea of agile development, and the ability to have consumer design individuals, analytics, capability, data scientists,” explained CEO Bruce Broussard at the company’s new Studio H facilities. Humana announced the formation of its Studio H unit a year ago, tapping former financial tech executive Heather Cox as the firm’s first chief digital health and analytics officer. “We decided to kind of plant our flag here in Boston because of the rich history of great medical advances… with hospital systems that are here, but also the great talent,” said Cox. Cox has hired 75 developers in the Boston unit over the last six months. The team has already helped build out one of the insurer’s first digital projects – a new virtual primary care service with telemedicine platform Dr. on Demand, which is slated to launch for small group Medicare plans in 2020. “We give you these tools that you can utilize through the phone, through the iPad, where we’re monitoring your health, and a signal is created, we can bring that back to your doctor (and) to your care teams,” Cox said. The company got a $225,000 tax incentive from the state of Massachusetts for locating Studio H in Boston, with a promise of creating up to 300 new jobs over five years. But even in with the incentives, the new unit is a big investment for Humana. One of the goals is to leverage technology to help boost its initiatives in home health care, after taking a 40% stake in Kindred at Home in 2018, along with two private equity firms. The initial integration costs were higher than expected, but Humana is betting that enhanced service will help drive membership growth. The Medicare giant is also hoping closer collaboration with Boston health start-ups and tech research facilities like MIT will help it better compete with rivals like CVS Health — which is betting on its retail clinics to improve chronic care for its Medicare members—and upstarts like Haven, Amazon’s Boston-based venture with J.P. Morgan and Berkshire Hathaway. For the city’s bustling health tech start-up community, the prospect of working at a major Medicare insurer opens the door to developing services that can scale on a national level much more quickly. “Humana is doing some really cool things with their digital health and analytics group to be able to integrate those entrepreneurs much earlier in the process,” said Nick Dougherty, managing director of MassChallenge HealthTech, a nonprofit accelerator firm. “You’re seeing a lot tighter collaboration, which should ultimately compress the time it takes to bring start-up companies to market and scale,” Dougherty said. Speed is also a priority for Humana, to develop consumer friendly digital health services that will keep members engaged with the company’s health insurance plans. Broussard describes it as building an ecosystem – borrowing the terminology analysts use to describe the way Apple and Amazon have expanded into more and more services. “The more we can bring partners in to help bring that alive, the faster we can do it,” he said. Making that health ecosystem sticky could go a long way to keeping members long term, in the fast-growing and increasingly competitive Medicare Advantage market.