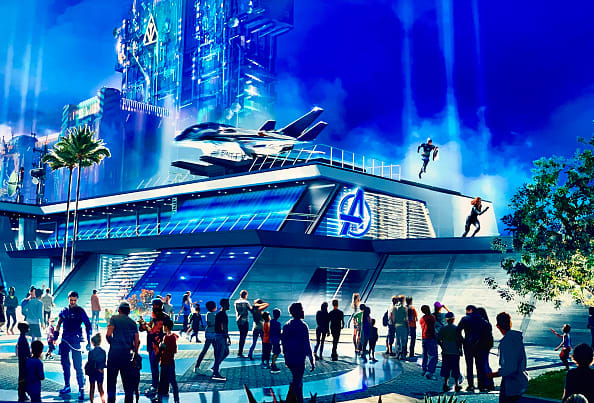 Rendering of Disney California Adventure’s upcoming Marvel-themed land named Avengers Campus during a media preview at the D23 Expo in Anaheim, CA, on Thursday, Aug. 22, 2019.MediaNews Group | Getty ImagesNew superhero recruits will be able to experience Disneyland’s Avenger Campus on June 4, Disney said during a theme park webcast Thursday.The new area is an extension to Disney’s California Adventure theme park in Anaheim, California and features Marvel’s mightiest heroes from Earth and the stars.”What I can tell you is, it’s awesome,” Josh D’Amaro told CNBC ahead of the webcast. “I think it’s going to be an unbelievable addition to California Adventure. If you think about the [Marvel Cinematic Universe] and what’s happening on that front, as recently as ‘WandaVision,’ it’s hot. It’s a hot franchise. And we now have the ability to open this thing up to the world.”The park was initially set to open in July of last year, however, due to the coronavirus pandemic, theme parks in California have been shuttered since March 2020.Disney’s two parks in Anaheim will reopen April 30 and will operate at around 15% capacity to start.The new land has taken the place of A Bug’s Land and includes the preexisting Guardians of the Galaxy: Mission: Breakout ride at the edge of Hollywood Land. It will also feature a new Spider-Man attraction, a dining location called Pym Particles Test Kitchen and an area based on Dr. Strange.”We’ve got the ultimate playground for Marvel,” D’Amaro said. “As quickly as Kevin [Feige] and that Marvel team can create characters and create stories, we can integrate them.”Disney has already teased that the Spider-Man ride will be based on the Worldwide Engineering Brigade aka WEB, a company that helps give regular people super powers. The attraction gives guests the chance to test out their webslinger vehicle. While driving the vehicle little spider bots are let loose and you must snatch them up with your new web-slinging powers.Character meet-and-greets will be a big part of Avengers Campus. Thor, Black Panther, Black Widow, and more will be walking around the land — visitors might also catch of a glimpse of the trickster Loki.D’Amaro teased “over-the-top” entertainment and technological innovation, including the potential for the company’s stuntronics tech to be showcased in the land. Stuntronics is a project that Disney pulled the curtain back on in 2018. In essence, Disney’s Imagineering team and development lab has created a robot that can swing and flip through the air like a real stunt person.In this case, the robot may look like Marvel’s friendly neighborhood Spider-Man.”There are just going to be some spectacles,” D’Amaro said. “There’s just going to be stuff that you can’t believe is happening in front of your eyes.”

Sneaker reseller StockX’s valuation jumps to $3.8 billion
Meet a family that travels the world full time on a yacht for $2,500 a month
To Top
error: Content is protected !!