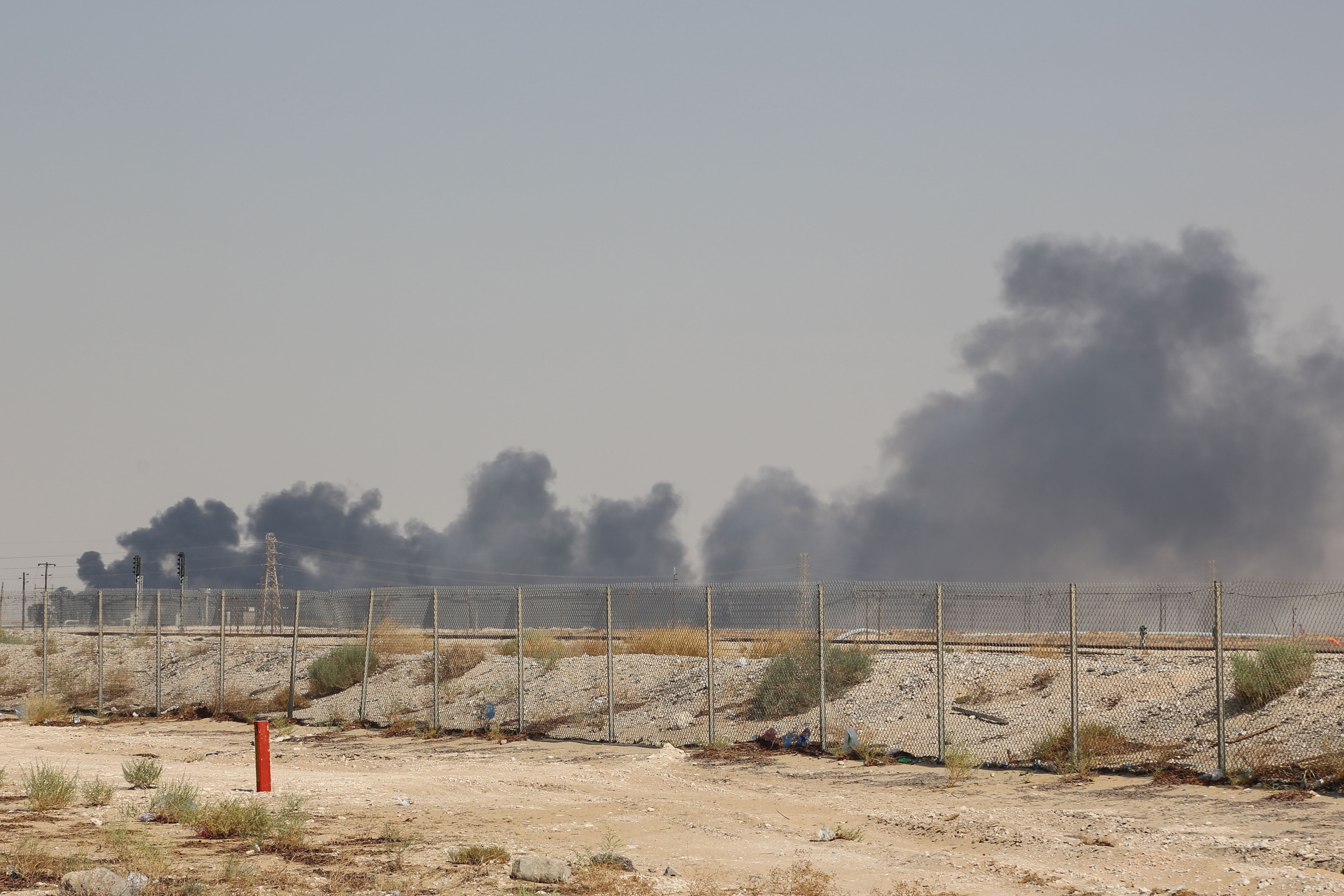 The attacks on critical oil production facilities in Saudi Arabia over the weekend will “effectively” wipe out the world’s spare oil capacity, an expert from S&P Global Platts said on Monday.Drone strikes attacked a oil processing facility at Abqaiq and the nearby Khurais oil field on Saturday, knocking out 5.7 million barrels of daily crude production — or 50% of the kingdom’s oil output. That’s more than 5% of global daily oil production.The country’s national oil company Saudi Aramco reportedly aims to restore about a third of its crude output, or two million barrels, by Monday.”This heightens the risk premium, it puts a lot of pressure on the supply side,” said Sarah Cottle, global head of market insight at S&P Global Platts.”This incident effectively eliminates the world’s spare capacity,” Cottle told CNBC’s “Squawk Box” on Monday, though she added the longer-term outlook is bullish due to the immediate need to draw down on crude stockpiles.International benchmark Brent crude oil price spiked by as much as 19% on Monday to $71.95 a barrel while U.S. West Texas Intermediate (WTI) jumped more than 15% to a session high of $63.34 a barrel, before gains were pared later.Brent crude was up 10.7% at $66.67 a barrel while WTI was up 9.6% at $60.12 a barrel at 10.27 a.m. HK/SIN.Cottle’s view was also borne out by energy consultancy Wood Mackenzie.”This attack has material implications for the oil market, as a loss of 5 million barrels per day of supplies from Saudi Arabia cannot be met for long by existing inventories and the limited spare capacity of the other OPEC+ group members,” wrote Alan Gelder, vice president for refining, chemicals and oil markets at Wood Mackenzie.”A geopolitical risk premium will return to the oil price,” Gelder said, in a note on Monday.Prior to the weekend attack, oil prices were weighed by supply surplus as well as slowing global growth concerns amid the U.S.-China trade dispute.Just last week, both the Organization of the Petroleum Exporting Countries (OPEC) and the International Energy Agency this week said oil markets could end up with a surplus in 2020, despite an agreement by OPEC and its allies to limit supplies.But if the outage in Saudi Arabia — one of the world’s largest oil exporters — continues for a prolonged period of time, oil prices could easily rise over $80 a barrel, said S&P Global Platts’ Cottle.Abqaiq is the world’s largest oil processing facility and crude oil stabilization plant with a processing capacity of more than 7 million barrels per day.Prices could move far higher in the event of a prolonged outage or ratcheting up of tensions including retaliatory strikes, Cottle said.The U.S. has blamed Iran for the drone strikes on those important facilities. Secretary of State Mike Pompeo said in a tweet Saturday Iran has launched an “unprecedented attack on the world’s energy supply.”Trump also responded in a tweet after the attacks, saying that the U.S. is “locked and loaded.”LEON GOLDFELD J.P. Morgan Asset Management, Multi-asset portfolio manager”The situation remains extremely uncertain as to who caused this, how long does it take to bring the oil capacity back onto the market. It’s still very much a very fluid situation so one doesn’t want to have a kneejerk reaction to it. What is interesting is that, I was looking at it this morning, the immediate oil price for Nymex is up 10% but whats interesting is to look a little bit longer term at what the futures let’s say going out to middle of 2020 because essentially you’ll assume that whatever capacity’s been hit will be back and running by the middle of next year. And even then, the price has gone up, it’s gone up by about 6-7% rather than the 10% that we’re seeing effectively in the spot market, so there is a risk premium being built by markets, it’s still not extreme as some have been saying $70 has been the peak i mean if we look at the oil markets since its bottom in 2015 and has its recovery, it’s been trading around $40-45 at the trough, around $70 at the peak, we’re now at $60 we’re still in the middle of that range. So I think immediately it doesn’t probably have a huge impact if you look at reaction of both equities markets that are open: US futures, Hang Seng, there’s a bit of weakness but it’s not really dramatic; 10-year bonds haven’t really moved from where they finished last Friday in the US, so I think the immediate reaction is probably wait and see.”EDWARD BELL Emirates NBD Director, Commodity Researchit’s v much repricing geopol risk.. come back in a big wayq a lull over summer months… comparession ang weighing on pricesfirst order priorritoy in SA and Saramco. repair and contain the damagenew mission for energy minister and reassuring buyers of SA crude on reliabilty of supply fr kingdomneed to give ideao f damagne , hog long to fix and security of other facilitoes of kingdomthese attacks and impact its hadin terms of how assets will be priced whether oil of FA assets. geopols will come into it in a big wayup and down over a short term event or blow up q significatinlylook at ME and oil market reprice geopol concernsreputational risk of importers of saudi crudeprolong any kind of repair, give reason to find laternativesnot to thsame cale but once u open the door to taking crude from US, that’s going to be pretty hard to shut if SA doesn’t try to ramp up productiona price spike to 70 is exatly what global econ needs at this stageglobal econ can’t bear oil price at 70-80 a barreldemand side reaction will deflat the price— CNBC’s Yun Li and Reuters contributed to this report.

Trump urges General Motors, auto union to ‘make a deal’ as workers prepare to go on strike
5 things to know before the stock market opens September 16, 2019
To Top
error: Content is protected !!