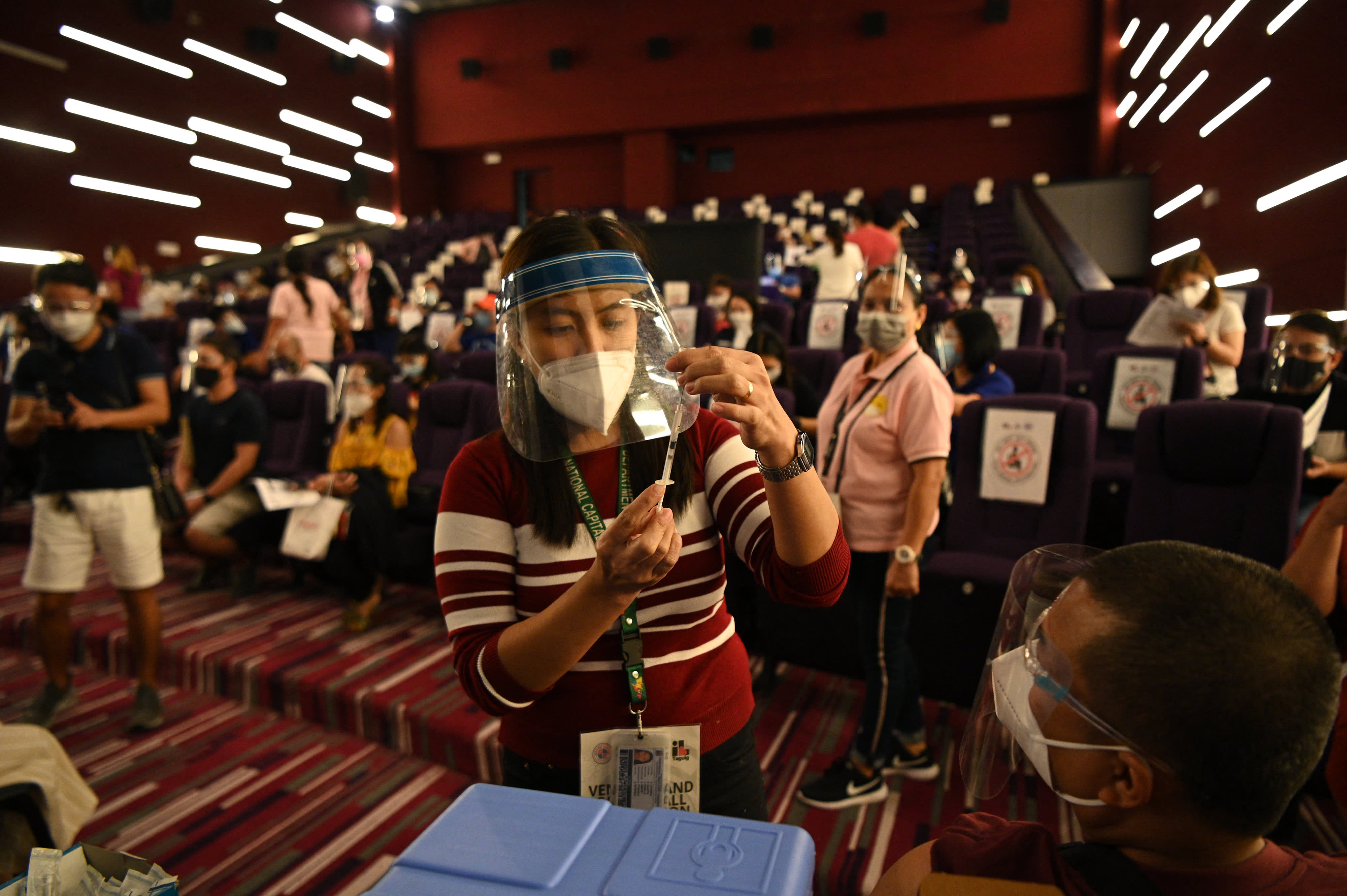 A health worker prepares a vial of Chinese Sinovac vaccine against Covid-19 coronavirus disease inside a movie theatre turned into a vaccination center in Taguig City suburban Manila on June 14, 2021.Ted Aljibe | AFP | Getty ImagesSINGAPORE — Asia was the first epicenter of the Covid-19 outbreak and could be the last region to emerge from the pandemic — especially with regard to travel, according to the Asia Pacific president of a travel services firm.”Unfortunately, Asia was first … in to the pandemic and we’re predicting that it’s probably going to be last out of the pandemic because of the vaccination rates,” said Todd Handcock of Collinson Group, which offers a slew of travel-related services such as insurance and operating airport lounges.According to Our World in Data, only 22.26% of people in Asia have received at least one dose of Covid-19 vaccine. In comparison, that figure is 53.03% in the U.S. and 63.56% in the U.K.The distribution of vaccines globally is very unfair … and Asia is suffering from that, especially Southeast Asia.Alicia Garcia-Herrerochief economist for Asia-Pacific, NatixisHandcock told CNBC’s “Street Signs Asia” on Wednesday that more people in the U.S., U.K. and Europe are starting to travel again.”We’ve seen good domestic travel actually in markets like China, the United States, Russia, for the last several months,” he said.”But from an international perspective, we’re starting to see, as those markets see increased vaccination rates — U.K. is one of the top leading the world right now — we’re starting to see travel certainly pick up,” he added.Slow vaccination campaignsBeyond that, however, Garcia-Herrero pointed out that there’s a “huge” uneasiness about vaccines in Asia “that somehow we don’t find, say in Europe or in other parts of the world — or at least not to the same degree.”Some parts of Asia including Taiwan and Vietnam were largely successful in containing the virus but have since been hit by a resurgence.A Natixis report published in May said “more effective containment has led to a lower sense of urgency” for vaccines in Asia. That’s apart from skepticism over the newly developed vaccines, the report said.Carrot or stick approach?Some Asian countries have introduced incentives to encourage more to get vaccinated, much like the lotteries and freebies offered in the U.S.In Hong Kong, there’s a lucky draw for residents who get inoculated. The top prize? A new one-bedroom apartment worth around 10,800,000 Hong Kong dollars ($1.39 million).India’s largest passenger airline, IndiGo, is giving discounts to customers who have received at least one dose of a vaccine. They can get 10% off the base fare when booking a flight, a press release from the company said.Meanwhile, in the Philippines, President Rodrigo Duterte has threatened people with jail time.”You choose, vaccine or I will have you jailed,” Duterte said on air on Monday, according to Reuters. That comment came after reports of low turnout at vaccination centers in the capital city of Manila.The president’s statement contradicts instructions from his health officials, who say the vaccine is voluntary, Reuters reported.— CNBC’s Christina Farr, Hannah Miao and Yen Nee Lee contributed to this report.