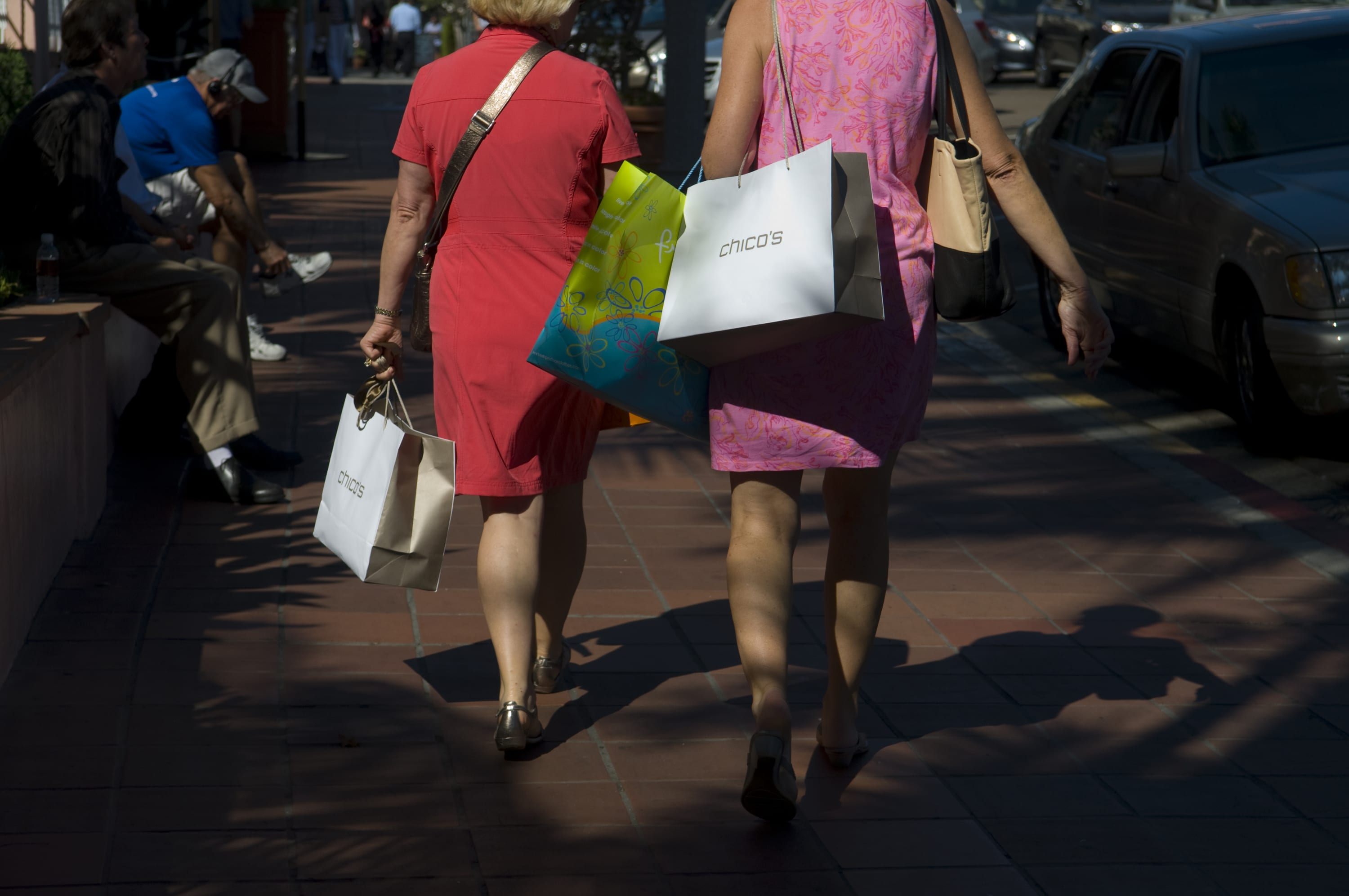 Shoppers carry Chico’s FAS Inc. bags in downtown La Jolla.Sam Hodgson | Bloomberg | Getty ImagesA woman in her 50s or 60s looking to window-shop today might only come across empty storefronts instead.Retailers that target the boomer and Gen X woman are shuttering stores at a staggering pace. Chico’s said it will shut between 60 and 80 stores in fiscal 2019, and at least 250 over the next three years. Barneys New York filed for bankruptcy in August, and said it only plans to run five of its more than 10 namesake stores. J.C. Penney plans to close 18 department stores in 2019 and has hinted that there will be additional closures in 2020 and beyond. And Ascena Retail Group will be shutting down all 650 Dressbarn stores, the company said this year.With the shuttering of so many mainstays that have targeted the boomer and Gen X woman, where is she turning to shop instead?”That’s a question a lot of these companies are trying to answer themselves,” said Janine Stichter, an analyst at Jefferies. “There’s been a major share shift out of specialty and department stores. In general for that consumer, there’s been specific challenges for that segment that Dress Barn, J.Jill and Chico’s all target.”But even for analysts, conclusions seem to be mixed.According to Stichter, older women are spending less on apparel.”For her, it’s more of a discretionary purchase that they need to feel compelled to buy. With younger consumers, they have a more regular calendar of social events that act as a catalyst,” she said.But Maria Rugolo, an analyst at The NPD Group, said boomers are actually spending more — just in different categories. Apparel dollar sales are up 4% for female boomers, according to NPD Group. It’s slipped slightly for Gen X, declining 1%. Meanwhile, sales at off-price retailers like T.J. Maxx and Nordstrom Rack and mass-merchants like Walmart and Target have grown double digits.The shift to off-price retailBriget Murphy, a content writer who lives in Dallas, said even though she used to shop regularly at malls, department stores and specialty stores, nowadays she’s buying less. “I feel like the quality of the clothes have gone down, and the prices have gone up,” the 62-year-old said.Murphy used to shop at Nordstrom, but in the past few years has begun preferring Nordstrom Rack. She said items there have a better value, and she likes that she might find a bargain that won’t be there the next day.Since 2016, Nordstrom Rack has been growing at a significantly faster clip than its full-price counterpart. In fiscal 2016, sales at Nordstrom Rack stores open at least a year grew 4.5% while same-store sales at its full-price department stores fell 2.2%. In 2017, same-store sales at off-price stores rose 2.5%, while full-price grew 0.1%. In 2018, Nordstrom Rack same-store sales jumped 3.5% compared with a 0.9% gain at its namesake department stores.Seeing the interest in off-price retailers, Macy’s has been expanding its own off-price option, Macy’s Backstage. It plans to add 50 additional Backstage locations in fiscal 2019. It currently operates 212 Backstages inside Macy’s stores and has seven free-standing stores. The company said in its most recent earnings call that same-store sales at the off-price stores are growing in the mid-single digits.Shares of Macy’s have fallen 45% since the beginning of the year, and Nordstrom has seen a 30% drop.TJX stock has grown 26% in the same period. Same-store sales increased 6% last year and 2% the year before that. In fiscal 2016 and 2017, same-store sales grew 5%.As e-commerce rises, how many stores?But the evidence also suggests older women are purchasing more online, which might explain the store closures. According to NPD, e-commerce for women’s plus has grown 5% and online sales among Gen X have also risen double digits.”In general, e-commerce for these companies have been kind of a bright spot and been growing,” Stichter said. “Somebody like a Chico’s is basically closing stores and saying, ‘If we close this store, we lose sales, but how much of it can we transfer to e-commerce?’ That’s the question they’re all trying to ask as they figure out how many stores they need.”For example, J.Jill, which targets women 45 years and older, reported that 37% of its 2018 revenue came from e-commerce. That’s pretty much in line with Madewell, which targets a slightly younger shopper in her 20s and 30s and also reported its e-commerce sales represented 37% of its direct-to-consumer revenue in fiscal 2018.But J.Jill is stingy with the free shipping for online orders, limiting the perk to a rare promotion. Madewell does offer free shipping to its loyalty club members. Stichter said this is an indication that older women don’t require the same benefits that giants like Amazon offer, such as fast and free shipping, to win over customers.Stichter also noted that when the volatility in the stock market increases, older female consumers tend to pull back on spending.”She’s either in retirement or close to retirement and she’s literally looking at her 401(k) bouncing around and saying, ‘I don’t know what this means for my retirement, I don’t have an income anymore,'” said Stichter.Over the past year, the Cboe Volatility Index, a gauge of fear in the market, has increased nearly 14%.

Bed Bath & Beyond is not a lost cause

Nearly 25% of households will ditch traditional TV by 2022