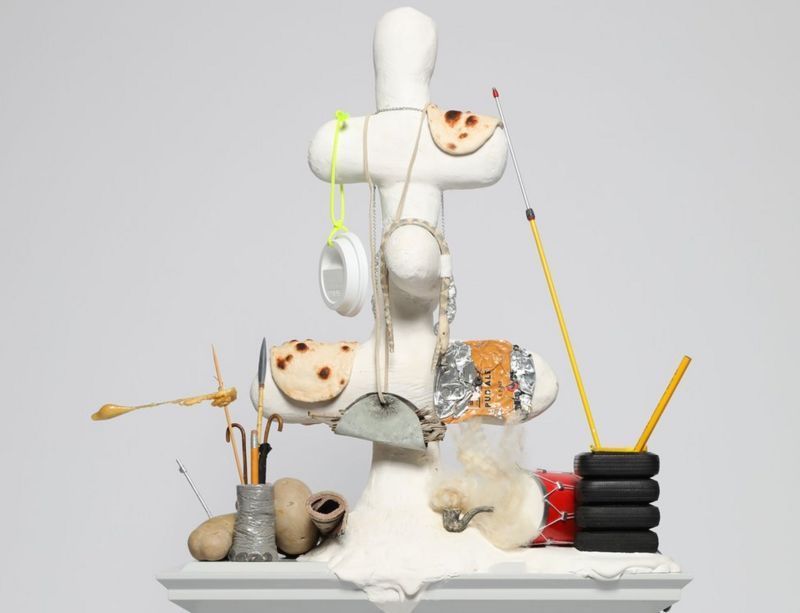 Monday, May 24
Artists Shortlisted for Trafalgar Square’s Fourth Plinth RevealedSix artist have been shortlisted for Trafalgar Square’s Fourth Plinth. The winning two designs, which will go on display in 2022 and 2024, will be selected by the Fourth Plinth Commissioning Group in late June. The six shortlisted proposals are GONOGO by Goshka Macuga, a giant rocket; Improntas (Imprint) by Teresa Margolles, which features casts of the faces of 850 trans people; On Hunger and Farming in the Skies of the Past 1957-1966 by Ibrahim Mahama, a grain silo like those used by Eastern European architects in Ghana in the early 1960s; Bumpman for Trafalgar Square by Paloma Varga Weisz, inspired by German folklore; The Jewellery Tree by Nicole Eisenman, which features the household objects mixed with British military memorabilia; and Antelope by Samson Kambalu, which restages a 1914 photograph of Baptist preacher John Chilembwe and European missionary John Chorley.

Whitney Museum Acquires Work by Freddy RodríguezThe artist Freddy Rodríguez is now represented in the collection of the Whitney Museum in New York. His abstract painting Y me quedé sin nombre (1974) is the first work by a Dominican-born New York artist to be acquired by the institution. Rodríguez, who draws from Dominican history and Caribbean culture in his practice, is known for his brightly colored paintings and collages that rely on New York School techniques and styles.
San Francisco Fine Arts Museums Hire Curator in Charge of European PaintingsEmily Beeny, who most recently served as associate curator of drawings at the Getty Museum in Los Angeles, will join the Fine Arts Museums of San Francisco as curator in charge of European paintings on July 1. A specialist in French paintings and drawings from the 17th to 19th centuries, Beeny will work with the 800-plus paintings in the institutions’ collections.
Longtime Director of UCLA’s Chicano Studies Research Center to Step DownArt historian and curator Chon Noriega will step down as director of UCLA’s Chicano Studies Research Center after nearly two decades in the role. During his tenure, the institution became home to the largest archive of materials Mexican Americans and Latinos in the world, accrued 63 international book awards, and established four endowed funds, among other accomplishments. “Chon Noriega’s visionary leadership of the Chicano Studies Research Center in the past two decades has taken it to new heights,” said David Yoo, vice provost of UCLA’s Institute of American Cultures, in a statement.