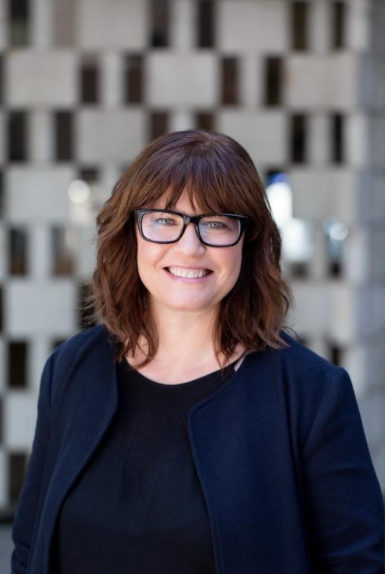 The Institute of Contemporary Art, Los Angeles has named Anne Ellegood as its new director. Ellegood, the senior curator of the Hammer Museum in the city, succeeds the ICA’s director of 19 years, Elsa Longhauser, who announced last December that she would step down.

Ellegood will start at the ICA on September 16. She said in an interview that she sees a great deal of enthusiasm in the city for the institution following its recent rebrand and move to a new building. (In 2016, the Santa Monica Museum of Art became the ICA, and the following year it moved across the city to a downtown space.)

“It has played such an important role in the constellation of museums here in L.A.,” Ellegood told ARTnews of the ICA. “With Elsa’s retirement and the new location, it’s an exciting moment—it’s the next chapter.”

Ellegood has been at the Hammer since 2009. Her recent curatorial credits include organizing a traveling retrospective of Jimmie Durham in 2017 and the most recent iteration of the Hammer’s “Made in L.A.” biennial, with Erin Christovale, in 2018. She has also organized 23 of the museum’s Hammer Projects installations, which invite artists to create new work in its lobby stairwell and gallery.

Prior to joining the Hammer, Ellegood held curatorial posts at the Hirshhorn Museum and Sculpture Garden in Washington, D.C. and the New Museum in New York.

“Anne is a remarkable curator with an ongoing commitment to social practice programming and scholarship,” ICA board members Laura Donnelley and Randi Malkin Steinberger, who co-chaired the director search committee, said in a statement. “These accomplishments, along with her longstanding connections to the Los Angeles community, make her the ideal leader to usher in a new chapter in the museum’s 35-year history.”

Looking toward the future of the ICA LA, Ellegood said she wanted to honor its mission of “supporting social justice and upending hierarchies of race, class, gender, and culture,” which it has pursued through acclaimed exhibitions and educational programming.

“What can a small, non-collecting arts institution that is an integral part of its local community and is responding to activities internationally look like?” Ellegood asked. “What can that look like? A lot of us in the field are evaluating the role of museums in our communities, in the cultural landscape and asking a lot of questions about best practices, and how do we be truly committed to diversity, inclusion, and transparency.”

One programmatic shift that Ellegood said she hoped to make is for the institution to begin to organize group exhibitions, as it has largely focused on single-artist shows. “In my perspective, group exhibitions that take up topical issues and respond to the practices that we’re seeing artists engaging in can be, in many ways, the most compelling, insofar as allowing us a perspective into contemporary culture,” she said. “I’ve always felt that they are important platforms for us to understand our world.”

Ellegood said that she wants the museum to address important contemporary issues not only programmatically, but also structurally, in terms of its staffing and its approach to planning future growth. She also sees a role for the ICA in advocating for artists in Los Angeles, a city that in recent years has seen a dramatic rise in the cost of living, gentrification and displacement, and housing shortages and homelessness.

“A lot of the challenges that L.A. is facing in a very palpable sense are literally outside the door of the museum,” Ellegood said. “I think all of us working in the arts community need to be having those conversations and advocating for ways that our city can make it possible for artists to continue to live and work here—that L.A. remains a city that is affordable. If we start to see artists leave, L.A. won’t be the thriving cultural center that it is.”