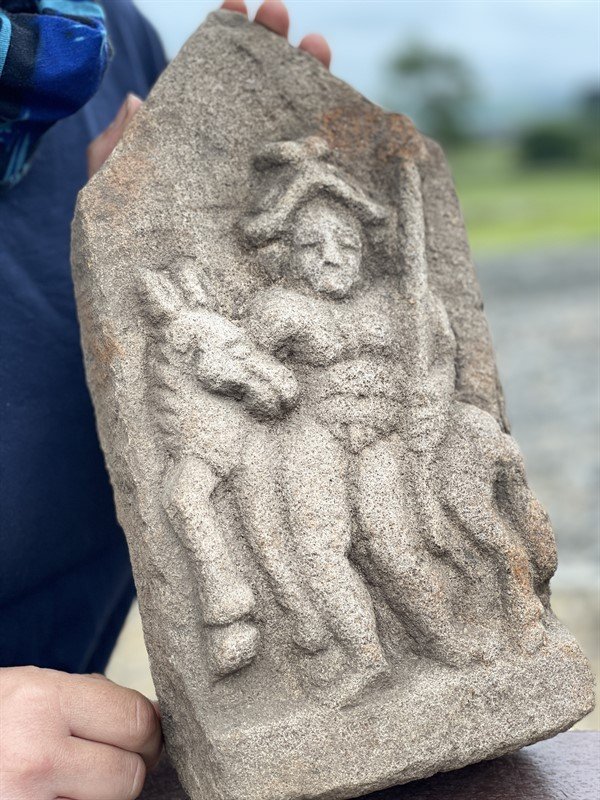 A Roman sandstone altarpiece featuring a naked horseman has been uncovered at the Vindolanda archaeological site in northern England.
Vindolanda, a fort just below Hadrian’s Wall, was periodically occupied by Romans between 85 C.E. to 370 C.E. It is most famous for ink tablets found there. Written on thin pieces of wood, they offer a series of firsthand accounts by the Romans who once inhabited the fort.
The site has provided a wealth of archaeological material, including structures like military barracks and residences, as well as artifacts such as Roman sandals, combs, textiles, swords, arrowheads, pottery, bronze figurines, and even leather boxing gloves.

Volunteers Richie Milor and David Goldwater discovered the carving while excavating the floor of a 4th-century cavalry barrack. It depicts a naked muscular man wearing a helmet and carrying a spear. He is shown standing in front of a horse or donkey.
“Sandstone altars like this one often have an inscription below them, helping us identify who is being portrayed,” archaeologist Marta Alberti explained in a video revealing the find. Alberti said that the altar would have been placed high up in a niche, as the flat back of the altarpiece indicates it was never meant to be viewed from behind, and that it would have been placed directly against the wall.
Without an inscription, the horseman can only be identified by his associated attributes. Given the two rounded pieces at the top, which may represent wings, Alberti believes that the carving could depict either Mars or Mercury, both of whom are well-known Roman gods. Mars was typically shown with a chiseled physique and iconic spear, and is commonly associated with war; Mercury, the god of travel, is often rendered with donkeys and horses, as well as a typical winged helmet.
It’s more likely that the carving represents a hybrid god, Alberti said, adding, “The cavalrymen residing at Vindolanda could have created a god which merged the characteristics of both Mars and Mercury, and [they] could have made this very unique piece in tribute to that particular god.”
The hybrid figure may even be the result of combining characteristics of Roman gods with ones associated with Gaulish deities, since the Fourth Cohort of Gauls is known to have lived at Vindolanda. Similar examples in Gallo-Roman religion include Mercury Visucius and Lenus Mars.

“We’re looking at something that we have never seen before,” Alberti added, noting that further research is required to determine whether the relief was originally painted. The stone carving will be displayed at the Vindolanda Museum through September 24.
It’s possible that additional clues may be unearthed that will aid in finding out the identity of this mystery horseman, as archaeologists estimate over 75 percent of the site remains to be excavated.
In an email to ARTnews, a representative for the Vindolanda Trust said that recent work has “uncovered a cache of cavalry lance heads” close to where the altarpiece was found. Continued excavation, the representative added, will no doubt “build a fuller picture of the context.”