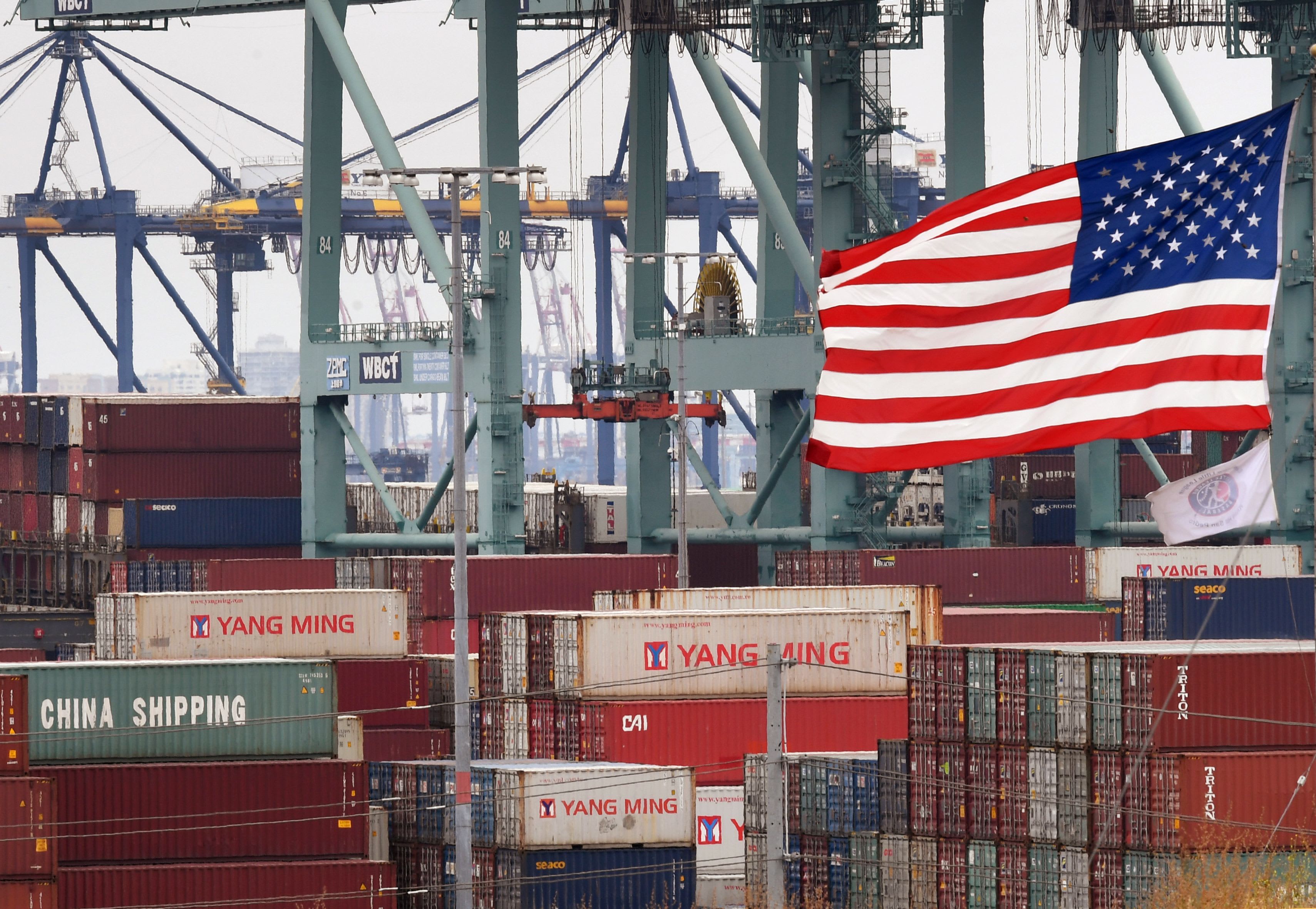 Chinese shipping containers are stored beside a US flag after they were unloaded at the Port of Los Angeles in Long Beach, California on May 14, 2019. – Global markets remain on red alert over a trade war between the two superpowers China and the US, that most observers warn could shatter global economic growth, and hurt demand for commodities like oil. (Photo by Mark RALSTON / AFP) (Photo credit should read MARK RALSTON/AFP/Getty Images)MARK RALSTON | AFP | Getty ImagesSome American companies in China are speeding up their move away from the mainland as increasing tariffs continue to hurt their businesses. That’s according to a survey released by the American Chamber of Commerce in Shanghai on Wednesday.More than a quarter of the respondents – or 26.5% – said that in the past year, they have redirected investments originally planned for China to other regions. That’s an increase of 6.9 percentage points from last year, the AmCham report said, noting that technology, hardware, software and services industries had the highest level of changes in investment destination.The research, conducted in partnership with PwC, surveyed 333 members of the American Chamber of Commerce in Shanghai. It was conducted from June 27 to July 25 — during the period when U.S. President Donald Trump and Chinese President Xi Jinping agreed to resume trade talks, and before the latest escalation in retaliatory tariffs.U.S. firms in the mainland also said restrictions to accessing the local market have made it difficult for them to carry out their business, the report said.Asked about the best possible scenarios in ongoing trade negotiations, more than 40% of respondents said greater access to the domestic market would be the most important outcome to help their businesses succeed. That was followed by more than 28% that ranked improved intellectual property protection as key.The third most hoped-for outcome of the trade talks was “increased purchases of U.S. goods,” at 14.3%, the survey showed. That’s in contrast to the Trump administration’s latest efforts to pressure China into buying more American products, especially in agriculture.Barred from market accessOne of the longstanding complaints U.S. companies have about operating in China is that many industries are closed to foreign businesses. In the sectors that are open, it is difficult to compete with state-owned enterprises or privately owned companies that may benefit from local connections or policies, they say. Allegations of forced transfer of critical technology to Chinese partners and lack of intellectual property protection are just some of the challenges U.S. businesses cite for operating in China.The latest AmCham survey found accessing the local market remained one of the key problems companies faced, with more than half the respondents — or 56.4% — saying that obtaining licenses was not easy.Still, with no sign of a trade agreement, 2019 will be a difficult year; without a trade deal, 2020 may be worse.AmCham Shanghai and PwC surveyBy industry, the one that most sought improved market access was the banking, finance and insurance sector. The high 81% of respondents in that sector seeking a better business environment contrasts with Beijing’s announcements in the last 18 months that it will be relaxing foreign ownership rules in the financial sector. Some measures include allowing majority foreign ownership of a local securities venture and increased foreign ownership of local stocks.However, survey respondents did note an overall improvement in nearly all issues of concern — including intellectual property protection and forced technology transfer. The proportion of businesses that said the Chinese government treats foreign and local companies equally also rose from 34% to 40% in the latest survey.Tariffs hurting US firmsThe U.S. business presence in China remains strong, with American companies and their affiliates raking in more than $450 billion in sales in the Asian country, according to an August report from research firm Gavekal Dragonomics. The analysis also pointed out that sales figure is more than twice the value of U.S. exports of goods and services to China.But retaliatory tariffs from both sides are hitting revenues and causing some American firms to change their China strategy, the AmCham survey showed.If Washington were to impose all the duties as threatened, essentially all Chinese goods exported to the U.S. will be subject to tariffs by the end of the year. In response to the increasing American duties, Beijing has countered with tariffs of its own on U.S. exports to China.Just over half of the survey respondents said revenue has decreased as a result of the increased tariffs. One third of them attributed a drop of between 1% and 10% of revenue to the higher duties.Overall profitability did not decline in 2018, the report said. But more respondents said revenue and margins declined last year, especially compared with operations in other countries. Pessimism levels shot up by 14 percentage points to about 21% — respondents felt less optimistic about the outlook for 2019 due in part to a slowing domestic economy.Bright spots remain in ChinaThe survey, however, did find some areas of optimism among respondents in China.The pharmaceuticals, medical devices and life sciences category ranked among the industries with the most respondents reporting revenue growth last year. That sector also came in second among those most optimistic about 2019.The AmCham report said the positive outlook was “likely due to government policy changes, including accelerated approvals of foreign drugs.”More than two-thirds of companies in food and agriculture planned to increase investment in 2019, the most of any industry, the report said. Retail and consumer companies also intended to invest more in China, especially in smaller cities where many analysts still see a major growth opportunity.However, businesses are getting ready for a drawn out trade war between the two economic giants. Of those surveyed, 35% expect trade tensions to continue for another 1 to 3 years, while nearly 13% say it will go on for 3 to 6 years. About 17%, however, were even more pessimistic, and predict that the trade conflict will drag on indefinitely.The report added: “Still, with no sign of a trade agreement, 2019 will be a difficult year; without a trade deal, 2020 may be worse.”