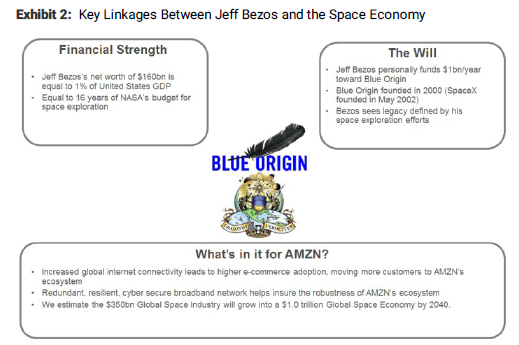 Jeff Bezos announces Blue Moon, a lunar landing vehicle for the Moon, during a Blue Origin event in Washington, DC, May 9, 2019.

Amazon is looking to expand its empire and Morgan Stanley believes Jeff Bezos’ ambitious satellite internet plan may become one of its most lucrative businesses.

Called Project Kuiper, Amazon aims to launch a network of 3,236 small satellites to create an interconnected network that beams high speed internet to anywhere on Earth. While Amazon has yet to outline a timeline or cost for Project Kuiper, in a note on Monday to investors Morgan Stanley analyst Adam Jonas highlighted the network’s potential.

Jonas said Project Kuiper represents as much as a “$100 billion opportunity,” marking it as a play in the consumer broadband sector of the space economy. Morgan Stanley’s estimate is based on its expectation that the space economy will grow to more than $1 trillion over the next 20 years. The firm’s comments came in a feature on Bezos’ space business Blue Origin, the latest in Morgan Stanley’s series on “space disruptor” companies.

Morgan Stanley on the connection between Jeff Bezos, Amazon and Blue Origin

“We believe investors may want to pay attention to Jeff Bezos for the advancement of efforts in Space, as he has demonstrated both the will and, increasingly, the financial muscle to put to work,” Jonas said.

Morgan Stanley’s note focused on Blue Origin. The space company is finishing development of a rocket for space tourism, a massive rocket for launching spacecraft to orbit and a lunar lander to carry humans and cargo to the Moon. Bezos sells over $1 billion in Amazon stock each year and invests it in Blue Origin.

Facebook does not expect ‘to make money at the outset’ with Libra
Crocs have taken over teen footwear, and boosted its stock
To Top
error: Content is protected !!