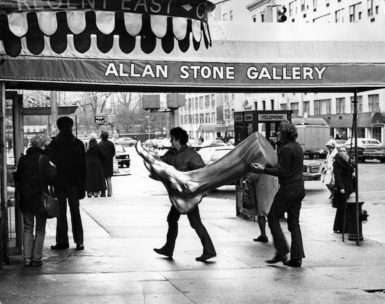 New York’s Allan Stone Projects, which was founded in 1960 as Allan Stone Gallery, is concluding its public exhibition program. For the last six years, the gallery has showcased art from the late dealer Allan Stone’s collection.

In a letter sent this morning to friends, colleagues, and clients, Dorothy Goldeen, president of Allan Stone Projects, announced that the gallery will operate privately after its current exhibitions of works by Domenick Turturro and Primarosa Cesarini Sforza close on June 29.

Speaking of the many ways galleries do business today, Goldeen told ARTnews that “we’re in the middle of a major paradigm shift.” She pointed to digital platforms and pop-ups as vehicles through which Allan Stone Projects can move away from “an old model that’s clearly morphing.”

During the 1960s, Allan Stone Gallery established itself as one of the most important New York galleries. It gave artists such as César, Jack Whitten, and Robert Mallory some of their first major shows in the city. In recent years, it has held shows focused on Wayne Thiebaud, Whitten, Robert Baribeau, and Willem de Kooning.

“The bottom line is that we love art, we’re educators, we enjoy changing somebody’s world by giving them the opportunity to live with extraordinary works of art,” Goldeen said. “It’s such a privilege, and we’re going to continue to do that.”