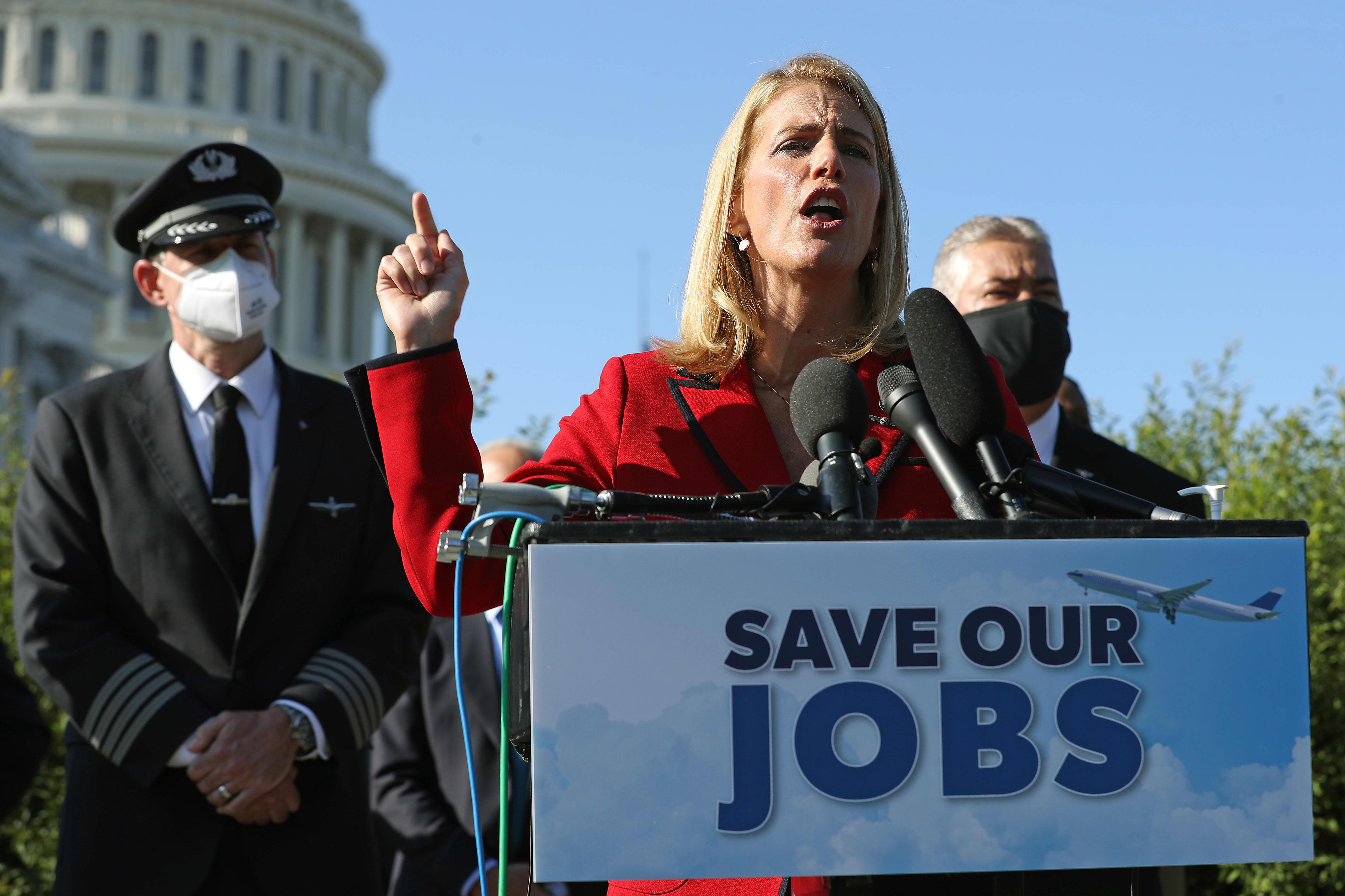 Association of Flight Attendants International President Sara Nelson joins airline executives, fellow union heads and political leaders to call on Congress to pass an extension of the Payroll Support Program to save thousands of jobs, during a news conference outside the U.S. Capitol September 22, 2020 in Washington, DC.Chip Somodevilla | Getty ImagesSome airline executives and labor unions are seeking a third round of billions in federal aid as tens of thousands of workers again face furloughs with travel demand still depressed in the Covid pandemic.The current round of aid, $15 billion, expires on April 1, and American Airlines and United Airlines over the past week have warned they could cut a combined 27,000 jobs then. Those funds required airlines to call back workers who were furloughed in the fall and maintain current jobs.”Essential workers have been living with incredible chaos and uncertainty. The furloughs are felt by the entire workforce,” Sara Nelson, international president of the Association of Flight Attendants-CWA, the country’s largest flight attendants union, said in written testimony at a House hearing Thursday on transportation during the pandemic. “A continuation of [payroll support] can’t wait.”Congress set aside $25 billion in aid designed to keep employees on the payroll at the start of the crisis last year that required them to maintain jobs until Oct. 1. A $15 billion aid package was passed in the latest coronavirus relief bill in December that has the same terms through March 31. Airlines and labor unions now want another $15 billion to guarantee jobs through Sept. 30.President Joe Biden’s proposed $1.9 billion coronavirus relief package doesn’t list additional aid for airlines but White House press secretary Jen Psaki said Congress could consider amendments in the coming days. Lawmakers including Sen. Maria Cantwell, D-Wash., and Rep. Rodney Davis R-Ill., expressed support Thursday for more federal airline said.The AFA union said it was confident that the Biden administration and Congress would support the additional industry relief.”We are fully behind our union leaders’ efforts to fight for an extension and we will lend our time and energy to support this effort in every way we can,” American Airlines CEO Doug Parker and President Robert Isom said in a staff note announcing 13,000 furlough warnings on Wednesday. “Our nation’s leaders understand the vital role airline workers play in keeping the country moving. They showed their support last year and we will encourage them to do the same again as the pandemic continues around the world.”Last week, United airlines told staff that it is “continuing to monitor demand and advocate for continued government support, and we are all working hard toward the day when we can bring back our furloughed co-workers permanently.”Travel demand is still weak. U.S. airlines lost a record $34 billion in 2020 and have warned they expect a rocky start to 2021 as they navigate new travel restrictions and testing requirements. Last month, the U.S. starting requiring proof of negative Covid tests to board flights to the United States. The Centers for Disease Control and Prevention is now “actively looking” at making Covid tests mandatory for domestic travel, something the industry vehemently opposes.The AFA’s Nelson said at Thursday’s hearing that the testing requirement and a lack of government aid for airline workers could spur bankruptcies and additional job cuts.Asked whether the industry should get a third round of federal aid, JetBlue Airways CEO Robin Hayes told CNBC on Monday that the travel and hospitality sector has been among the hardest-hit parts of the economy and needed support.”I think that it’s right and natural that that’s where support should be targeted,” said Hayes.