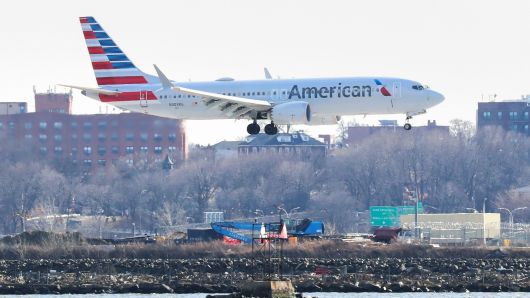 An American Airlines Boeing 737 Max 8, on a flight from Miami to New York City, comes in for landing at LaGuardia Airport in New York, March 12, 2019.

Airlines canceled more than 4,000 flights across the U.S. this weekend as heavy snow and thunderstorms snarled operations at major airports in cities like Chicago and Dallas, leaving some travelers stranded overnight.

Storms dumped more than 5.3 inches of. snow at O’Hare International Airport on Sunday, prompting airlines to cancel more than 1,000 flights. Those that did take off Sunday were delayed by an average delay of 44 minutes, according to the Chicago Department of Aviation. Another 189 flights were canceled Monday morning at O’Hare, while travelers stuck overnight on Sunday were still struggling to schedule their trips.

American Airlines said it canceled more than 1,700 flights due to the Chicago snowfall over the weekend and thunderstorms along the East Coast on Monday morning. Southwest has canceled over 400 flights since Saturday.

Overall, more than 38.5 thousand flights have been delayed since Saturday, and over 4,500 have been canceled, according to flight-tracking site Flightaware.com.

After heavy snowstorms, Chicago temperatures are increasing and are expected to reach mid-50s on Monday and mid-to-high 60s by Tuesday, forecast models show.

Apple versus Qualcomm patent trial to begin
Lyft’s stock continues to dive after its dismal week
To Top
error: Content is protected !!