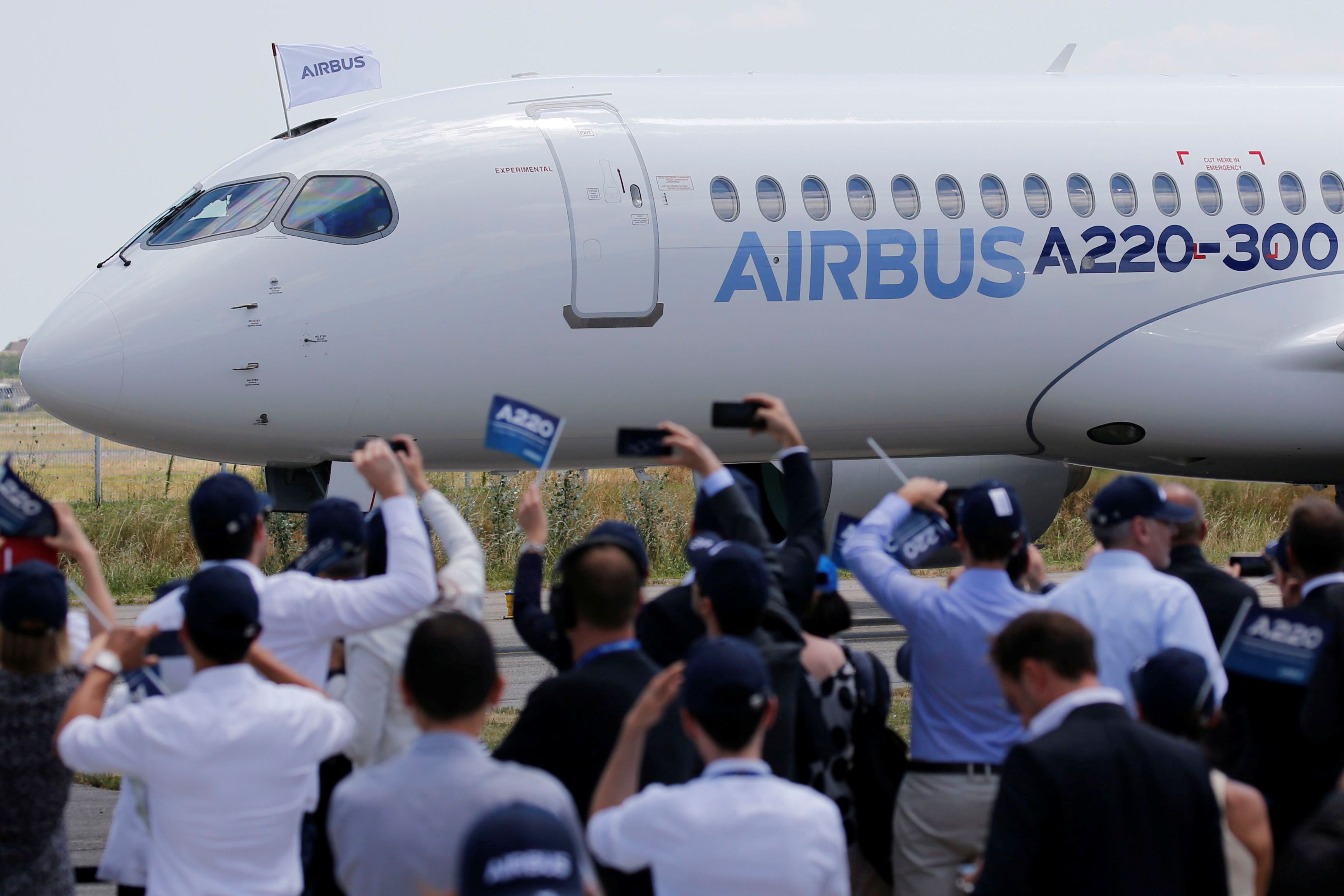 Airbus members celebrate the landing of an Airbus A220-300 aircraft during its presentation in Colomiers near Toulouse, France, July 10, 2018. Airbus A220 is the new brand for the small CSeries passenger jet acquired from Canada’s Bombardier.

Airbus, the aerospace giant based in Europe, is pushing its growth in the U.S. with the start of production in Alabama for its A220 airplane.

The new first U.S.-built A220 will not be finished and delivered until well into next year, but the start of production is a major milestone in Airbus’ push to leverage its Alabama base to grow business.

“The airplane has substantial backlog, whether it be the 220 and the 320 series where we have over a six-year backlog,” said Jeff Knittel, CEO Of Airbus of America. “Some of that from the U.S. airlines is a function of being in Alabama, but some of it is just having the right product at the right time.”

This growth is exactly what Airbus had in mind in 2017 when it bought 50.1% of the C Series plane from Canada’s Bombardier. The C Series was a single-aisle plane with the capacity to carry between 120 and 160 passengers. It was also struggling to attract buyers given the dominance of Airbus and Boeing in the single-aisle market.

Bombardier, looking for greater financial certainty to grow its other aviation and rail operations was willing to sell a majority of the C Series and Airbus was looking for a chance to counter Boeing’s expansion in smaller single-aisle planes through its courtship of Embraer.

Since buying the majority of the C Series and renaming it the A220, Airbus has leveraged the planes unique capacity. The company now has firm orders for more than 500 A220’s and momentum fueled in part by its assembly plant in Alabama.

With a new assembly line under construction, the A220 will add another 400 jobs to Airbus’ plant in Mobile, Alabama, and eventually push employment for the facility to more than 1,500 workers. With the U.S. unemployment rate near a 50-year low, finding those workers has been a challenge.

“The labor market is tight, so what we have done is expanded our recruiting efforts across the U.S.,” said Knittel. “The good news is, in the Alabama area, the Florida area, reaching over even in the Texas, there is a substantial number of high-quality employees available.”

While the A220 has become a success for Airbus, the commercial aviation industry has been focused on Boeing’s 737 Max. That plane has been grounded since March following two crashes that killed 346 people.

It’s also lead to speculation Airbus can capitalize on the Max grounding to generate more orders for the A220. Knittel said it’s not that simple.

“The Max situation really doesn’t change what we’re doing today. The order book is full, the demand for airplanes is substantial,” he said. “This is not something that we can flip the switch and start producing more airplanes.”