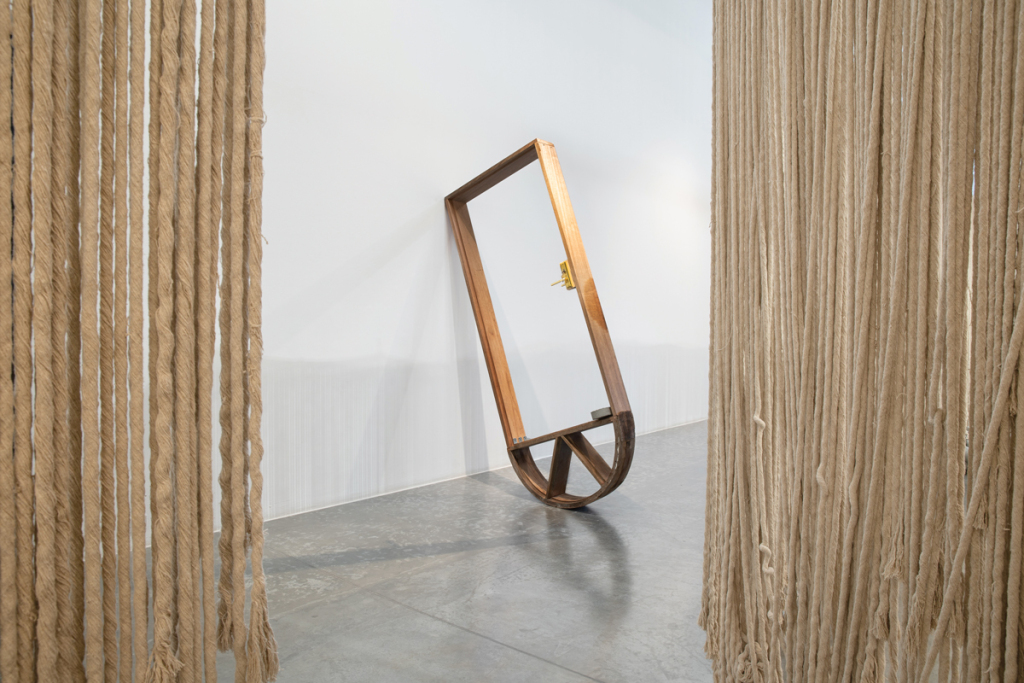 It’s March as I write this, and Dubai is stretching like a cat after a nap. Vaccinations are rolling out at a furious pace and everywhere, there is a kind of manic, delirious optimism. At the end of January, I returned to my hometown after 15 years split mostly between Dubai and New York. I should have come back sooner. During college I would return in the summer, in those heady years post–financial crash when the city was constantly reinventing itself. I would land each time to see new roads, new buildings, a new urban narrative and backstory. Things feel different now; the city is growing into itself.

With things largely back in full swing, it has been easy to reacclimate to the art scene. Artist Lawrence Abu Hamdan launched a monthly series of artist crits; I attended two, and am heartened by the depth, rigor, and generosity of the discussions. I began taking an online class on the dancing body at the Bombay Institute of Critical Research and Analysis, and wondered what something similar might look like in Dubai. Mostly, I’ve tried to sit down with as many new (mostly art or art-adjacent) people as possible, and it’s as pleasurable as it is overwhelming after the discursive dead air of New York—I’m thankful I left before the NFT boom.

The first crop of gallery shows I saw here was mostly disappointing, with the exception of Charbel-joseph Boutros’s at Grey Noise gallery, in which the artist built a mausoleum within a constructed art fair booth for his dealer—and by extension, for the gallery, the fair, the commercial scene. And then there was a promising, if uneven, show from Afra Al Dhaheri at Green Art Gallery with one particularly stunning work: a door and fanlight frame with the paneling and glass removed, but the hinges and handle mechanism left intact (Absent Yet Present, 2020). I can’t stop thinking about the piece, in part because it feels the way the city’s arts infrastructure does right now: all framed out and ready for participants to make of it what they will.
In February, I visited Abu Dhabi, an hour’s drive away, with my father to see a show about Filipinx seafarers and domestic workers in Hong Kong, and had to show the results of a PCR test to enter the city. (Later, I watched a talk by Laleh Khalili, whose new book Sinews of War and Trade, about stranded seafarers in the UAE, is being widely read locally.) We visited the Louvre Abu Dhabi, which has been substantially if not comprehensively rehung since I last visited, and although the museum didn’t excite, it was still beautiful in its rare emptiness. My father wondered why there aren’t more Indian artifacts; I remembered that the détente with Qatar has thawed, and look forward to visiting their magnificent Museum of Islamic Art, which, when I first visited it in 2017, radically changed my own ideas of patrimony.

Back in Dubai, late March brought a pared-down version of the city’s annual Art Dubai fair, which had moved online last year but resumed as one of the first in-person events on the global art circuit since the pandemic began. In its scaled-back six-day version with 50 galleries (around half the usual number), the fair returned to Dubai’s financial district, the Dubai International Financial Center (DIFC), where it originated in 2007 as the Gulf Art Fair. I was in Riyadh during this year’s edition but heard that the new location—along with Covid-19 restrictions, and a period of national mourning following the death of a sheikh—gave it a rather sterile, corporate vibe. “The energy at 2019’s fair felt buzzing and electric,” artist Lena Kassicieh told me. “This year’s didn’t have that grassroots feel and felt much more like a sales event.” Independent cultural adviser Aleksei Afanasiev said that, although the booth presentations and sales seemed weak, “the greatest thing about Art Dubai 2021 is that it actually happened.”
“The fair simply cannot be compared with its previous years,” said Afanasiev. “Of course, there were no big fat parties and no free flow of champagne. Everyone managed to keep their masks on, although social distancing was tough at such an art world reunion. The move back to DIFC I think somehow positioned the fair as more of a business-oriented event, and even in a way resembled other fairs like Frieze London with its tent structure. It is no longer a gathering in a Disneyland-looking, 5-star hotel ballroom, and it’s great.”
Everyone praised the Art Dubai team for pulling off such a difficult feat. Chris Fussner of the Cebu-based gallery Tropical Futures Institute returned to the fair thrilled to get back into it after a long pandemic year, albeit with low expectations, given the economic uncertainty of the time. The 2019 Art Dubai was the gallery’s first-ever fair, and as a young business without a deep collector base, they rely heavily on the international collectors the fair attracts. This time, they didn’t sell well, though they did place two works with institutions, including one with regional powerhouse Art Jameel. Fussner says that they had “a lot of anxiety dealing with the social situation, but you have to take a foot forward sometime… We look at Dubai as a long-term participation.”

View of the exhibition “Age of You: a kaleidoscopic exploration of the extreme self,” 2021, at the Jameel Arts Centre.
Photo Daniela Baptista

For years, the art scene here was anchored by Art Dubai (and, to a lesser extent, the city’s galleries), in part because the fair’s longtime director, Antonia Carver, ran it as something more akin to an institutional umbrella than a commercial event. Over the years, the fair’s residency and pedagogical programs did a lot to develop the local scene, while the introduction of a sector for regional 20th-century masters did much to shore up the markets for Arab, South Asian, Iranian, and East African art of that era. In return for all its gifts, the fair always seemed to exact a feudal kind of fealty—criticizing it felt (and still feels) verboten—and it produced an arts calendar that was disproportionately weighted toward March. More recently, however, as the fair has become increasingly important to the international art world as a clearinghouse for art from the surrounding region, it has felt decreasingly relevant to the city of Dubai—and that feels like a healthy shift.
Over the past few years, what’s filled the role once played by the fair is a frenetic period of institution building. Carver now directs Art Jameel, the flagship exhibition space of the Saudi behemoth Jameel Foundation located on Dubai’s waterfront. These days, everybody here is looking toward Saudi Arabia (and scrambling to represent Saudi artists). During the huge public art festival I attended in Riyadh in March, I found myself moved by the gritty energy of the sprawling city and its art scene, which will host its inaugural Ad-Diriyah biennial, curated by Philip Tinari, in December, while Jeddah will soon open the enormous Hayy: Creative Hub.

During the pandemic, Dubai-based institutions like Art Jameel and the Alserkal Arts Foundation have pumped resources into Zoom—and more recently, in-person—talks and panels, where people in the art world discuss this place and this region, its politics of repression and exclusion, and so many other topics formerly out-of-bounds, not directly but obliquely. There’s a lot happening in the way of conversation but very little on record or in pixels or print. There’s been a profusion of new artist collectives, grassroots initiatives, and—from young Emiratis, who are thus far the only ones who can afford it—project spaces. They are concentrated in Sharjah and Abu Dhabi, serving as counters to the market-based dominance of Dubai. There’s next to no arts funding despite a collective desire to have an arts space independent of all these institutions’ efforts to brand and claim responsibility for any cultural production.
For a long time, the art and writing produced by noncitizens in Dubai was shot through with the idea of belonging—not the alienation of diaspora from an idealized homeland, however distant, so much as a dissonance felt in the place you now call home, where you may have been born and lived all your life but will be kicked out of when your visa expires. There was a yearning to be acknowledged as something-hyphen-Emirati, to say nothing of the rights and privileges—and along with it, hyper-surveillance—accorded to those with citizenship.
But people seem to have gotten over that now, assuaged perhaps by the 2019 introduction of the Golden Visa program, which grants a 10-year stay. It renews automatically—functioning as a permanent residency in all but name. You can apply, but like much else in this region, I hear that approval for the cultural categories is predicated not on your portfolio but on wasta, as they say here—Arabic for “who you know.” I met an artist-curator who applied early this year and received a rejection in just four days; now, he’s moving back to the United States to do an MFA, generously funded by the government under the Sheikha Salama residency. (Initially, this residency and fellowship was restricted to UAE nationals, but like much else, it has now expanded to include all residents.) Never too far behind Dubai, Abu Dhabi recently announced a new cultural visa, though the details are fuzzy.

“How do you avoid getting co-opted and instrumentalized under the aegis of soft power?”

What occupies artists, writers, and curators in Dubai today is, above all, the Indian Ocean, as a site where excavated regional histories and a decentered consideration of global Blackness, in the form of what is sometimes reductively referred to as the Arab slave trade, converge. Another thing on people’s minds: questions of terroir and what it means to produce from here, and how to avoid getting co-opted and instrumentalized under the aegis of national soft power. The schlocky materiality of the city-as-freeport, a tendency that can be traced back to artists like Hassan Sharif responding to the early consumerist boom, remains popular. Also, tracing family histories of migration across the Arabian and other seas. Young South Asians in the art scene are waking up to the fact that they—we, though perhaps I’m not so young anymore—are overwhelmingly the demographic majority in this city (and in the Emirates as a whole), and increasingly produce work that excavates that.
In 1986, Salim Abdallah Salim—aka Sal Davis—from Mombasa, released a promotional music video for the World Chess Championships. It’s a real yeehaw energy banger, all sun, sand, and jet-skiing, with waving Emirati flags and a rousing chorus of “Back in Dubai / there’s a sun and it shines there all the time / going home to the smiles on the faces of kids who remind me / Dubai is mine.”
Funnily enough, there’s no chess playing anywhere at all in the video. I’ve had the song stuck in my head since I returned. Dubai is mine. I miss my partner and my friends, but it feels good to be home.
A version of this article appears in the June/July 2021 issue of ARTnews, under the title “If You Build It….”