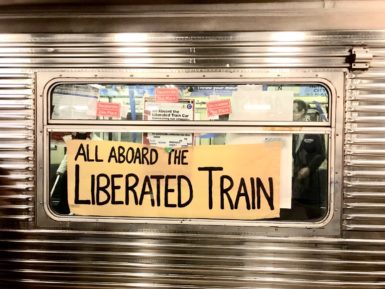 The “Liberation Train” action at which Yates McKee was arrested.

On Friday, an activist involved with the group Decolonize This Place was arrested by the New York Police Department en route to a protest at the Whitney Museum for allegedly defacing a train car.

A representative for Decolonize This Place, which has been staging weekly protests at the museum, said that Yates McKee was arrested by undercover officers at a subway station following an action in which protesters boarded a train car with banners and flags, to spread information about their activities. One banner read, “All Aboard the Liberated Train Car.”

Decolonize This Place’s “Nine Weeks of Art and Action” has taken aim at the Whitney’s vice chair, Warren B. Kanders, the owner of Safariland, which manufactures tear-gas canisters that have reportedly been thrown at asylum seekers along the U.S.–Mexico border.

An NYPD report claims that McKee was “observed putting multiple graffiti stickers on a northbound C train without permission or authority to do so.” He was charged with creating graffiti, criminal mischief, and possessing graffiti-making materials.

“Whitney Museum leadership, including the board of trustees, should know it is responsible for the arrest and continued detention of an art historian, educator, friend,” the group said in a statement. “As we go to do jail support now, we urge the Whitney to make the right decision and reverse course. We simply will not allow Warren Kanders to remain on its board.”