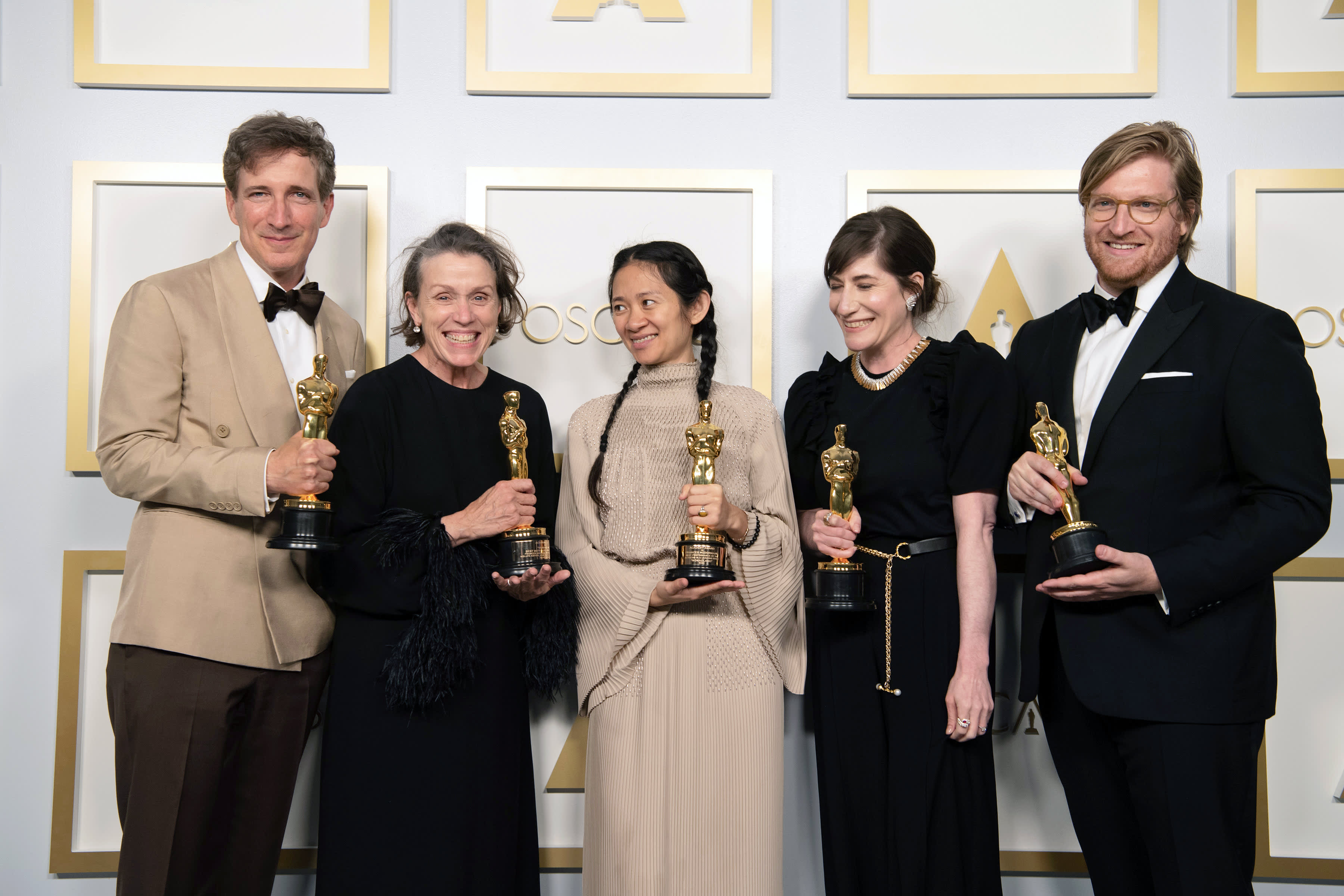 In this handout photo provided by A.M.P.A.S., (L-R) Peter Spears, Frances McDormand, Chloe Zhao, Mollye Asher, and Dan Janvey, winners of Best Picture for “Nomadland,” pose in the press room during the 93rd Annual Academy Awards at Union Station on April 25, 2021 in Los Angeles, California.Matt Petit | Getty Images Entertainment | Getty ImagesThe 2021 Oscars ceremony was watched by the smallest audience the award show has ever received.On par with the performances of the Emmys and Golden Globes during the pandemic, the Academy Awards struggled to pull in mainstream viewers.Only 9.85 million viewers tuned into Sunday’s ceremony where Searchlight’s “Nomadland” took the top prize and Netflix walked away with the most wins. That’s a nearly 59% drop from the 23.6 million viewers that turned on their TVs for the program last year, according early fast national numbers released by Nielsen.The Academy’s third hostless show in a row scored a 1.9 rating among adults 18-49, a key demographic for advertisers, a 64% drop from 2020.The drop in both metrics is not entirely surprising, as award shows, in general, have faced declining viewership in recent years. After a year with movie theaters shuttered due to the pandemic, and with so few mainstream films nominated, this outcome was very much expected.Even so, Disney Advertising Sales sold out of ad inventory ahead of the 93rd Oscars telecast. Brands like Verizon and Expedia ran major new campaigns on Sunday’s broadcast. So too did General Motors’ Cadillac, which ran ads for its first electric crossover vehicle, Lyriq. Other advertisers included Google, Rolex, Airbnb, Apple, P&G, Panera and Subway.Oscars 2021 coverage from CNBCRead more about this year’s Academy Awards:The evening was filled with many historic firsts that shined a bright light on diverse talent within the film industry, but that wasn’t enough to lure in a strong audience.In addition, the Hollywood producing team behind the event did little to entice audiences or spark social media interest. In fact, the ceremony faced backlash after the Academy of Motion Picture Arts and Sciences’ decision to move the best picture announcement, which historically takes place at the end of the show, to before the two top acting awards.