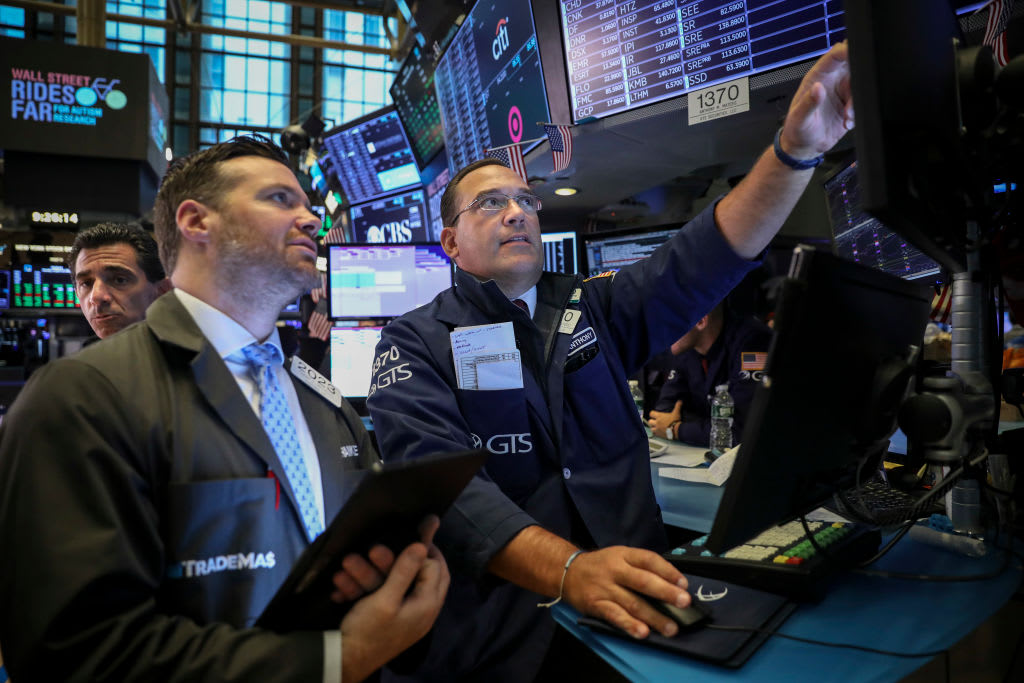 Traders and financial professionals work on the floor of the New York Stock Exchange (NYSE) at the opening bell on August 19, 2019 in New York City.

U.S. stock futures were pointing to a higher Monday open on Wall Street, adding to two straight weeks of gains for the Dow Jones Industrial Average, S&P 500 and Nasdaq. With August, the second down month of the year, in the rear view mirror, the Dow stands about 2% away from its July all-time highs. The S&P 500 and Nasdaq were, respectively, 1.6% and 2.8% off their July record highs. Aside from volatility over the U.S.-China trade war, investors are looking ahead to Thursday’s policy meeting of the European Central Bank and next week’s gathering of Federal Reserve policymakers. Easier monetary measures are expected from both the Fed and the ECB.

Bond yields were moving higher Monday morning, adding to a September rebound on optimism about next month’s U.S.-China trade talks. In the era of market-moving tweets from President Donald Trump, largely about China trade and the Federal Reserve lately, J.P. Morgan created an index to track the impact of Trump’s tweets on the bond market. The bank said its index found a measurable fraction of the moves in implied rate volatility for 2-year and 5-year Treasurys. The J.P. Morgan officials behind the index said that such a dynamic makes sense since the president has been pushing the Fed to cut interest rates again as the U.S.-China trade war puts pressure on the global economy.

Containers being transferred at Qingdao Port on July 13, 2018 in Qingdao, Shandong Province of China.

China’s exports unexpectedly fell in August as shipments to the U.S. slowed sharply, pointing to further weakness in the world’s second-largest economy and underlining a pressing need for more stimulus as the trade tensions escalate. Beijing is widely expected to announce more support measures in coming weeks to avert the risk of a sharper economic slowdown as the United States turns up tariff pressure. On Friday, China’s central bank reduced so-called bank reserve requirements for a seventh time since early 2018 to free up more funds for lending.

Apple, a day ahead of its annual iPhone launch, is addressing a report alleging the U.S. tech giant and its manufacturing partner Foxconn violated a Chinese labor law, which states that temporary hires cannot exceed 10% of the total employed workers. “We looked into the claims by China Labor Watch and most of the allegations are false,” Apple said in a statement. Foxconn confirmed that a review of its operations in Zhengzhou “did identify some workforce compliance issues.” Apple did not disclose which of the allegations may be true.

J.P. Morgan Chase is close to winning the lead advisory role for the initial public offering of Saudi Aramco, the world’s most profitable corporation, edging out rivals for the plum assignment, people with knowledge of the situation told CNBC’s Hugh Son. A final decision is expected next week and could still change, the people said. Morgan Stanley, which had been jockeying with J.P. Morgan for top billing on the deal, was hurt by its work leading the Uber IPO, according to these people. Saudi officials, who are large owners of Uber through the country’s sovereign wealth fund, were displeased with Morgan Stanley after its bankers misjudged demand for the ride-hailing giant’s stock in May.