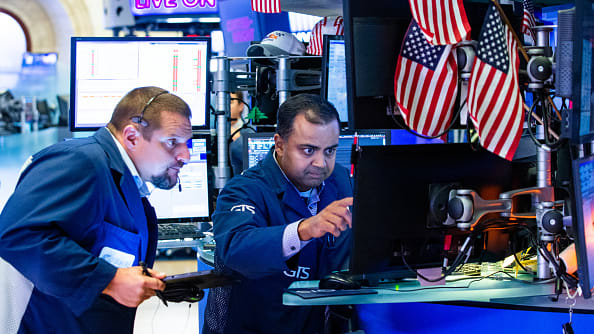 1. Dow to open higher as stock rotation happens ‘under the surface’Traders work on the floor of the New York Stock Exchange (NYSE) on August 23, 2019 in New York City.Eduardo Munoz Alvarez | Getty ImagesU.S. stock futures were mostly higher on Wednesday morning, after the Dow Jones Industrial Average gained about a quarter percent, and the S&P 500 and Nasdaq basically closed unchanged Tuesday. Little movement in the S&P 500 over the past two sessions “really does obscure a lot of drama under the surface,” according to CNBC’s Mike Santoli. He pointed out that more than 100 S&P 500 stocks were up at least 2%, while about 80 were down at least 2%, in a rotation from over-owned growth momentum stocks into neglected value names. CNBC’s Bob Pisani looks at the sectors investors are buying. Heading into Wednesday trading on Wall Street, the Dow was riding a five-session, 3% winning streak, putting blue chips less than 2% away from their July all-time highs.2. Bond yields continue higher ahead of key central bank meetingsBond yields kept moving higher, as investors sold government debt in the past few sessions ahead of a flurry of central bank meetings over the coming days. The European Central Bank is scheduled to meet Thursday, with policymakers likely to announce an easing package that could include an interest rate cut. The Federal Reserve is set to meet next Tuesday and Wednesday. U.S. central bankers are widely expected to reduce rates by a quarter point for the second time this year. President Donald Trump has been pressuring the Fed to cut rates as the U.S.-China trade war threatens to slow global economic growth further.3. Trump slams the Fed again, tweeting central bankers are ‘boneheads’President Donald Trump announces his nominee for Chairman of the Federal Reserve, Jerome Powell (L), in the Rose Garden of the White House in Washington, DC, November 2, 2017.Saul Loeb | AFP | Getty ImagesPresident Donald Trump was at it again Wednesday morning, tweeting that the central bank should cut rates to zero or even set negative interest rates. Trump called Fed officials “boneheads” for not lowering rates as much as other countries around the world, many of which have negative rates. The president also said the nation should refinance its debt load. While it’s unclear how such an idea would work, the Treasury likely would have to be involved. There have been calls recently to issue longer-term debt, such as a 50-year or even a 100-year government bond.4. China unveils plans to exempt certain US products from additional tariffsChina’s Ministry of Finance on Wednesday announced plans to exempt 16 types of U.S. products from additional tariffs, including food for livestock, cancer drugs and lubricants. The exemption, which is scheduled to go into effect Sept. 17, will be valid for a year. The announcement comes as high-level trade officials from China and the U.S. prepare to meet in Washington next month, in hopes that a new round of negotiations can lead to the end of the two nations’ yearlong trade war. Each side has imposed billions of dollars of import tariffs. The American Chamber of Commerce in Shanghai said its latest member survey shows many U.S. businesses in China are getting hurt by the levies.5. NYSE set to hold a moment of silence to remember 9/11The nation remembers Sept. 11, 2001, on Wednesday, 18 years after terrorists hijacked four planes and killed 2,983 in New York City, at the Pentagon in Washington, D.C., and in a Pennsylvania field. The New York Stock Exchange, which closed for six days after the 2001 attacks, pauses for a one-minute moment of silence at 9:20 a.m. ET on Wednesday morning. The 9/11 Memorial & Museum holds its remembrance ceremony, beginning at 8:40 a.m. ET. Remembrances around the nation also include events at the Pentagon and near Shanksville, Pennsylvania, where one of the planes went down.

Airbus wants to know everything passengers do on an airplane
Walmart expands its ‘unlimited’ grocery delivery service nationwide
To Top
error: Content is protected !!