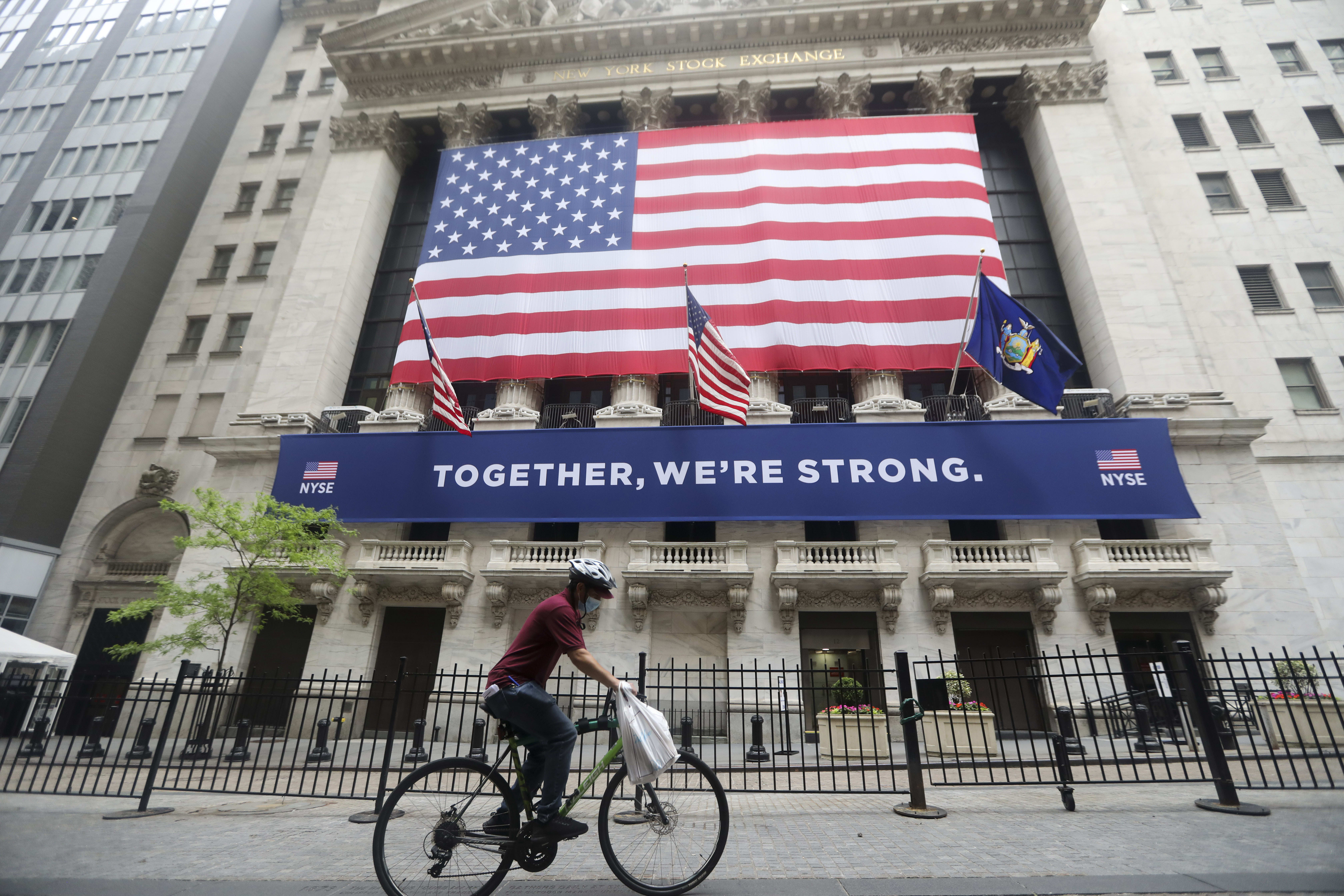 1. Dow set to build on Friday’s 829 point surgeA cyclist passes by the New York Stock Exchange in New York, on May 26, 2020.Wang Ying | Xinhua News Agency | Getty ImagesDow futures were pointing to an over 200-point gain at Monday’s open as investors continue to bet on economic progress as states enter various stages of reopening. New York City begins the process Monday. The Dow Jones Industrial Average on Friday capped a strong week, surging 829 points, or nearly 3.2%, on May’s shocking jobs gains. The Nasdaq rose 2%, hitting an all-time intraday high Friday but closing shy of February’s record. The S&P 500 gained 2.6%.As of Friday’s close, the Dow was within 9% from its record close in February; the S&P 500 was over 5.7% away. From their March 23 coronavirus lows, the Dow and Nasdaq were each up 48%; the S&P 500 was up more than 45%. The Federal Reserve begins its two-day June meeting Tuesday as Wall Street looks for central bankers to continue to support markets.2. Tech and economic sensitive stocks are behind rallyPeople wearing face masks look at a cellphone outside an Apple store during a May Day holiday in Shanghai on May 1, 2020.Hector Retamal | AFP | Getty ImagesTech stocks have been leading the market higher, with Apple closing at a record high on Friday of $331.50 per share. Apple stock, mirroring the Nasdaq’s gain, has gained about 48% from its March coronavirus lows. Stocks that benefit the most from the economic reopening have also been behind Wall Street’s latest rally. From April to Friday’s close, JPMorgan Chase and Citigroup were up more than 23%; Hilton Worldwide was up nearly 28%; American Airlines shares were up 52%; while Delta and United were up almost 20% and about 34, respectively. The airlines, in particular, have been decimated by the coronavirus crisis as demand for flying plummeted.3. New York City begins to reopen MondayPeople observe 30 minutes of silence for black men and women killed by police. The vigil took place at Carl Schurz Park in Manhattan’s Upper East Side. June 4, 2020.Spencer Kimball | CNBCNew York City shifts into phase one of the state’s coronavirus reopening plan Monday even as protests against racial injustice continue. Phase one allows more businesses to resume operations, including construction, manufacturing and retail, but only for curbside pickup. Mayor Bill de Blasio said last week the city could move into phase two as soon as early next month. Phase two would allow for outdoor dining to reopen, as well as in-person retail, barbershops and more.4. Biden to meet with George Floyd’s family ahead of funeralDemocratic U.S. presidential candidate Joe Biden speaks at an event in Philadelphia, Pennsylvania, June 2, 2020.Joshua Roberts | ReutersPresumptive Democratic presidential nominee Joe Biden travels to Houston on Monday to pay his respects to the family of George Floyd. The former vice president was initially expected to attend Tuesday’s private funeral in Houston, where Floyd grew up. Biden, who will instead meet with the family privately without disrupting the services, plans to record a video message for the funeral. Floyd died on Memorial Day after a white police officer knelt on his neck for more than eight minutes during an arrest in Minneapolis. Floyd’s killing sparked nationwide protests, which at times have become violent.5. Minneapolis lawmakers seek to disband, rebuild policeA book store is boarded following protests against the killing of George Floyd, on June 5, 2020 in Minneapolis, Minnesota.Kerem Yucel | AFP | Getty ImagesA majority of the members of the Minneapolis City Council are saying they support disbanding and rebuilding the city’s police department. Minnesota last week launched a civil rights investigation into Floyd’s death. Nine of the council’s 12 members appeared with activists at a rally in a city park Sunday afternoon and vowed to end policing as the city currently knows it. However, the move to defund or abolish the department is far from assured. Disbanding an entire department has happened before, in Camden, New Jersey, in 2012 and in Compton, California in 2000.— Follow all the developments on Wall Street in real-time with CNBC’s live markets blog. Get the latest on the pandemic with our coronavirus blog.