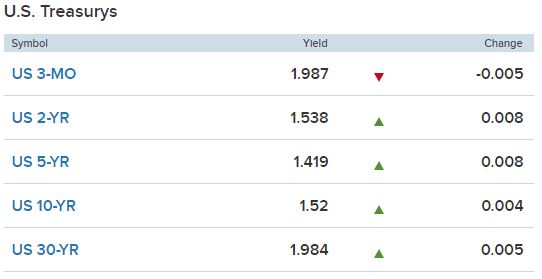 1. Dow set to rally on hopes for progress in resolving the US-China trade war

U.S. stock futures were indicating a triple-digit point advance at Friday’s open for the Dow Jones Industrial Average, as Washington and Beijing showed a willingness to try to resolve their yearlong trade war. On the last trading day of the month, barring something really dramatic, August will go down as the second negative month in an otherwise strong 2019. The Dow and S&P 500, as of Thursday’s close, were off nearly 2% for August, while the Nasdaq was down about 2.5% for the month. However, all three were set to break their four-week losing streaks.

A continued increase in bond yields on Friday provided support for stocks. However, the 10-year Treasury yield was still inverted, trading lower than that of the 2-year. Such a move has come before every recession over the past 50 years, though the downturn has not been immediate. Earlier this week, yields were under heavy pressure, with the 30-year Treasury yield on Wednesday hitting an all-time low. Other parts of the yield curve had been trading at multiyear lows. The recent yield curve inversions may be signaling that the Federal Reserve is not cutting rates quickly enough. Central bankers next meet in mid-September.

Chinese shipping containers are stored beside a US flag after they were unloaded at the Port of Los Angeles in Long Beach, California on May 14, 2019.

Barring an agreement or a tweet, the first batch of 15% tariffs on another $300 billion worth of Chinese imports could go into effect Sunday, with the rest imposed on Dec. 15. On Thursday, the U.S. and China softened their stances on efforts aimed at resolving their trade dispute. Beijing indicated it won’t retaliate against President Donald Trump’s new tariff threat immediately. The two economic superpowers also discussed the next round of in-person trade negotiations in September. On Friday, China said it will exempt Tesla electric vehicles from its planned auto purchase tax.

4. Protests in Hong Kong escalate as a major pro-democracy activist is arrested

Joshua Wong outside the Legislative Council shortly after being released from prison on June 17, 2019 in Hong Kong, China.

Intensifying pro-democracy protests in Hong Kong are providing another layer of complication for China as it seeks to defuse trade tensions with the U.S. The world is watching Beijing for how it responds to the demonstrations in the Chinese territory. City police, which banned planned weekend protests, arrested Hong Kong democracy activist Joshua Wong. China sent a fresh batch of troops into Hong Kong on Thursday. Trump recently said a violent China response to demonstrations would make a trade deal tough.

In this NOAA satellite image, Hurricane Dorian leaves the Caribbean Sea and tracks towards the Florida coast taken at 18:40Z August 29, 2019 in the Atlantic Ocean.

Hurricane Dorian is expected to strengthen into a dangerous Category 4 storm in the coming days as it heads toward Florida’s Atlantic coast. No evacuations were ordered as of Friday morning, but many are expected as the storm’s path becomes clearer before its expected landfall on Labor Day or early Tuesday. The entire state of Florida is under a declaration of emergency. Dorian’s arrival threatens to disrupt one of the busiest travel weekends of the year. Airlines expect flight cancellations, and some are letting passengers change free-of-charge their holiday weekend tickets to flights later next week.


Clarification: This story was revised to clarify that the U.S. tariffs that may begin on Sunday and on Dec. 15 would affect a total of $300 billion worth of Chinese products.