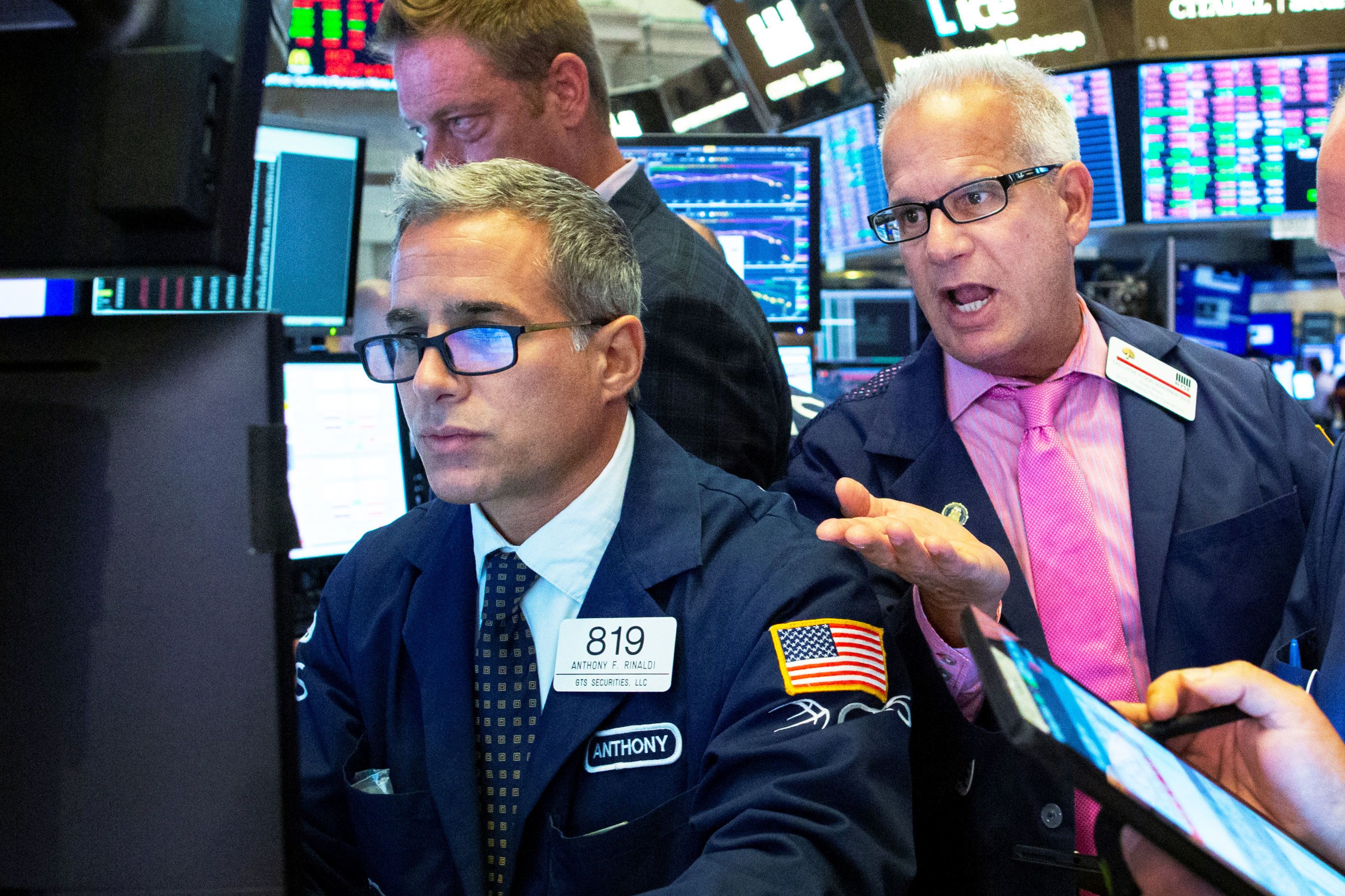 U.S. stock futures turn lower Friday morning, giving up gains after China unveiled a plan to impose retaliatory tariffs on another $75 billion worth of U.S. goods. St. Louis Federal Reserve President James Bullard’s call Friday for more U.S. interest rate cuts had helped futures earlier. Thirty minutes after Wall Street’s 9:30 a.m. ET open, Fed Chairman Jerome Powell addresses the central bank’s annual economic symposium in Jackson Hole, Wyoming. The Dow Jones Industrial Average, S&P 500 and Nasdaq were pacing to break their three-week losing streaks. The Dow closed modestly higher Thursday, while the S&P 500 and Nasdaq finished lower. With six trading days left in August, the three stock measures were still in negative territory for the month. However, before Friday’s session for all of 2019, the Dow was 12.5%; the S&P was up 16.6%; and the Nasdaq was up 20.4%.

US Federal Reserve Chairman Jerome Powell speaks during a press conference after a Federal Open Market Committee meeting in Washington, DC on July 31, 2019.

Powell’s speech could make or break the markets on Friday. He faces the tough challenge of presenting a unified monetary policy voice from the most divided central bank in years. He could create trading volatility if he doesn’t indicate plans to cut interest rates again. As of Friday morning, the market put more than 90% odds on a quarter-point rate cut next month, following a similar reduction in July. Under pressure from President Donald Trump to keep pace with accommodative measures around the globe, the Fed’s job is not getting any easier. Indonesia’s central bank cut rates overnight in a surprise move.

Bullard at the St. Louis Fed told CNBC on Friday that central bankers should cut rates because the inverted yield curve is “not a good place to be.” Bullard, a policy committee voting member this year, argued the Fed should “take out the insurance” with a rate cut, adding it could always take it back. On Thursday, Philadelphia Fed President Patrick Harker, a non-voter in 2019, told CNBC he sees no reason for another rate reduction. Kansas City Fed President Esther George said on CNBC the Fed does not need to reduce rates because the economy remains strong. She was one of two region Fed presidents who voted against the July cut. George also said the Fed’s “large balance sheet” pressured long-term bond yields, possibly contributing to the recent yield inversions.

Treasury yields were moving higher Friday morning, a day after the 10-year yield inverted for the third time in a little more than a week, briefly trading below that of the 2-year. That spread flip-flop has happened before every recession in the last half-century. But it’s taken on average nearly two years for the downturn to materialize. In addition to U.S. rate guidance, traders will be looking for Powell’s view on inversions and negative rates across Europe and in Japan.

Larry Kudlow, director of the U.S. National Economic Council, speaks during a Bloomberg Television interview outside the White House in Washington, D.C., U.S., on Friday, Aug. 2, 2019.

Top Trump economic advisor Larry Kudlow now reveals that the president could put forward a tax cut before the 2020 election. Kudlow’s remarks in a Thursday interview added another twist, in a week of mixed messaging from the White House about possible tax cuts and other proposals to stimulate the economy. Before the China tariff news Friday morning, Kudlow said on Thursday that he had still expected Chinese negotiators to meet with administration officials in Washington in September to continue talks aimed at resolving the two nations’ trade and technology disputes.