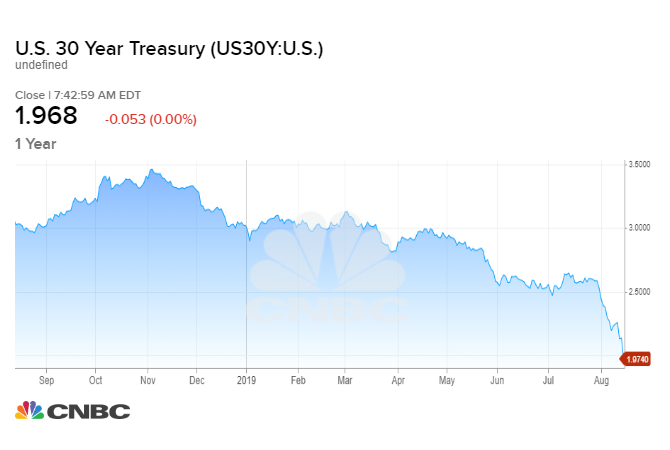 1. Futures see wild swings after a China threat and then strong Walmart earnings

Traders work after the closing bell at the New York Stock Exchange (NYSE) on August 12, 2019 at Wall Street in New York City.

U.S. stock futures, in volatile trading, swung from earlier gains to losses Thursday after China vowed to take unspecified steps to counter President Donald Trump’s plan to impose 10% tariffs about $300 billion of additional Chinese imports on Sept. 1. Then better-than-expected quarterly earnings and revenue from Walmart pushed Dow futures higher again. The Dow Jones Industrial Average was coming off its worst session of the year on Wednesday, dropping 800 points or 3%. Heading into the new trading day, the Dow was down 7% from its all-time highs in July.

2. 30-year Treasury yield dips below 2% for the first time ever

After Wednesday’s brief recession-signal inversion of the 2-year Treasury yield and 10-year yield, the 30-year Treasury yield on Thursday broke under 2% for the first time ever. An inverted yield curve marks a point when short-term investments in Treasurys pay more than longer-term ones. When they flip, it’s widely regarded as a bad sign for the economy, though often a recession doesn’t materialize until nearly two years later. Driving the Treasury yields lower, in an inverse relationship with prices, has been a flight from stocks to the perceived safety of the bond market.

Chinese President Xi Jinping and President Donald Trump at the G-20 Summit in Osaka on June 29, 2019.

China said countermeasures would be needed because the U.S. tariffs violate a consensus reached by Chinese President Xi Jinping and Trump. Beijing also argued that new U.S. duties get off the right track of resolving the two nation’s trade and technology disputes through negotiations. Trump has said his announcement on Tuesday to delay tariffs on certain consumer items until mid-December was a move to help American businesses not a concession to the Chinese.

Members of the medical profession gather to protest against Hong Kong police brutality at Queen Elizabeth Hospital on August 13, 2019 in Hong Kong, China.

As China ponders its response to pro-democracy protests in Hong Kong, Trump suggested in a tweet a “personal meeting” with Xi over the escalating unrest. Those demonstrations and the U.S.-China trade war have been weighing heavily on Hong Kong, and the government there unveiled on Thursday an a $2.4 billion economic stimulus package. Officials in the Chinese territory also cut full-year growth forecasts to flat to 1% from the original 2% to 3%.

Shares of Walmart, a Dow component, were surging about 6% in Thursday’s premarket after the retailing giant reported better-than-expected second-quarter earnings of $1.27 per share and revenue of $130.4 billion. For fiscal year 2020, the company increased its earnings outlook. As for the upcoming additional U.S. tariffs on more Chinese imports, Walmart already warned earlier this year that more duties would lead to increased prices for customers.