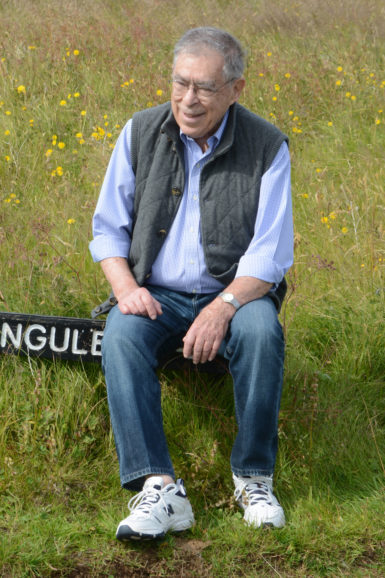 Wynn Kramarsky, an inexhaustibly curious arts philanthropist and public servant who assembled one of the postwar era’s richest collections of contemporary drawings, died yesterday at the age of 93. His death was confirmed by his eldest son, Daniel Kramarsky. The cause was pneumonia.

Over more than a half-century, Kramarsky almost entirely devoted his collecting to works on paper, with an emphasis on Minimal and Conceptual art, a commitment to hunting out the new and overlooked, and an ardent desire to share his finds with others.

Aiming to spread his enthusiasm for his favored medium and to get his collection out into the world, he ran a New York exhibition space on the fifth floor of 560 Broadway in SoHo from 1991 to 2006, gave numerous pieces to museums, and organized shows of his holdings with an array of university galleries.

James Cuno, who now leads the Getty Trust, once wrote that, when deciding whether to give works to shows, Kramarsky considered a few simple questions: “Will they be seen by as many people as possible? Will lesser-known artists be included together with well-known artists? And will students be involved in the production of the exhibition catalogue?”

He was frequently asked why drawings had captivated him. Kramarsky once told the poet William Corbett that, as the son of an art collector, he found himself being brought to museums regularly as a child, but he could not stand the way adults discussed art and so he would slip away into drawings galleries, which were often empty.

“You could go up, and you could look up close; you could see how it was made,” Kramarsky said. “I’m still doing that. I want to go and look and see: how was this made? The great thrill that I think very few people get, except collectors, is that at a certain point, you have a sheet of paper in your hand. It’s not glazed, it’s not framed, and there is nothing sexier—well, maybe my wife—but there’s nothing sexier than that feeling of being right there, that feeling when you can feel the motion of the hand of the artist making what is there.”

Werner Hans Kramarsky, who was widely known as Wynn, was born in Amsterdam in 1926, the son of Siegfried Kramarsky, a banker and devoted collector who came to own masterpieces by Old Masters and Impressionists, and Violet “Lola” Ingeborg Else Kramarsky, who led Hadassah, the Women’s Zionist Organization of America, in the early 1960s.

Fleeing the Netherlands in his youth, in advance of the war, Wynn Kramarsky landed in New York. In 1944, he joined the Navy, working as a radioman. Just under five feet, he told Corbett that he stood out among his fellow sailors, “who had never had any dealings with either a Jew, or a refugee, or somebody from New York. All three strikes were against me, but it was a good experience. I learned a lot: Duck! Quickly!”

After being discharged in 1946, Kramarsky attended various schools—he obtained a bachelor’s from the New School in New York in 1962—and worked at investment banks, before entering NYU Law School, which he left in his second year to become a special assistant to New York Mayor John Lindsay. In 1970 he quit government to open a management consulting firm, but returned in 1975 when he was nominated to be New York State’s Commissioner of the Division of Civil Rights.

All the while, Kramarsky was collecting. One early buy was a Jasper Johns drawing, for which he agreed to pay Leo Castelli Gallery $175 over the course of six months. “Although that $175 was two months’ rent, if I missed the rent, I’d crash with somebody,” he said. “It was easy; I was single.” (That changed quickly. In 1959, he married Sarah-Ann Kramarsky after the two met through a Democratic group in Manhattan.)

Collecting with his wife, Kramarsky relished discovering and supporting young artists and flouting received taste. Earl “Rusty” Powell, the longtime chief of the National Gallery of Art in Washington, D.C., has written that “he has been called a quiet crusader,” adding, “He is not adverse … to the occasional epater le bourgeois, a perspective from which I can gladly state the National Gallery has richly benefited.”

That said, Kramarsky did not necessarily enjoy the trappings of being known a leading collector. He playfully said being that known as a collector is “a fate worse than death,” saying that then “they don’t want to talk about the work anymore. They ask you questions like, ‘Why do you collect?’ and, ‘How do you collect?’ and, ‘How much money do you spend on your collecting?’ . . . You know, that’s all unimportant; the work is important.”

Told that he had amassed an important collection by one interviewer, Kramarsky was quick to downplay his achievement. “There are very few people who have been interested in postwar drawing, as I have been,” he said. At the time he began collection, contemporary drawing was considered more marginal in relation to painting and sculpture than it is now. “It was a very easy way to start,” he said.

“Believing that collecting should be, first and foremost, about art and artists, Wynn has always sought to downplay, if not banish outright, the association of his name with his collection and its related activities,” Ann Philbin, the director of the Hammer Museum in Los Angeles, has written. Shows of his collection almost never included the Kramarsky name in their title, and loans he made were often attributed to a private collection.

The list of artists that Kramarsky collected could run on for many lines, and some of the most famous were Mel Bochner, Richard Serra, Eva Hesse, Brice Marden, Ellsworth Kelly, Agnes Martin, and Sol LeWitt. Holding work by such stars bolstered his reputation as a collector, but one of his rules was that if shows of his collection included blue-chippers, they also had to include figures who had not yet gotten their due.

When Kramarsky donated 81 works to MoMA in 2004, to mark its reopening after a major renovation, 24 of the 70 artists represented in that gift were entering its collection for the first time. He had become a member of the museum’s drawings committee in 1994, a trustee of the museum in 1998, and a life trustee in 2003.

“Focusing on a mark or a stroke, he saw through the eyes of those he most admired—artists,” MoMA’s chief curator of drawings and prints, Christophe Cherix, said in a statement. “A work’s capacity to pull you in—often for hours at a time—mattered immensely to him. Wynn handpicked some of the most extraordinary drawings in MoMA’s collection. These works stand out not for their scale or bright color, but the way they invite you to come close and follow with wonder and abandon an artist’s hand.”

Kramarsky, who was on the ARTnews Top 200 Collectors List for years, extended his support for the arts well beyond MoMA. At various points, he served as chairman of the Drawing Center and the Andy Warhol Foundation in New York, and on the board of the Hammer and the Morgan Library in Manhattan, among others institutions.

While Kramarsky preferred to keep a low profile, he played a role in one of the biggest art-market events of the 20th century. His father Siegfried Kramarsky died in 1961, and in 1990, his heirs, who included Wynn, offered one of his Vincent van Gogh paintings, Portrait of Dr. Gachet (1890), which had long been on view at the Metropolitan Museum of Art, at Christie’s in New York. It sold for $82.5 million, becoming the most expensive work ever sold at auction at that time. Three years earlier, another van Gogh from the collection had made about $20.2 million on the block.

Kramarsky is survived by his four children, six grandchildren, his brother Bernard, and his wife, who was the daughter of Dorothy Schiff, the longtime owner of the New York Post.

In keeping with his wry, self-effacing  style, Kramarsky bristled at the notion that his work collecting throughout his life was a form of patronage. “I hate that word,” he once said, “because it is also related to patronizing and that’s very much a pejorative.” As he saw it, “if we can’t make the world beautiful ourselves, we should help the people who can make the world more beautiful. And that is what this collection is mostly about.”

As a human being, he continued, “you have a responsibility to challenge, to move the world along.”

Billionaire David H. Koch, Right-Wing Activist and Philanthropist, Has Died at 75 -ARTnews
A Share of Its Profits -ARTnews
To Top
error: Content is protected !!