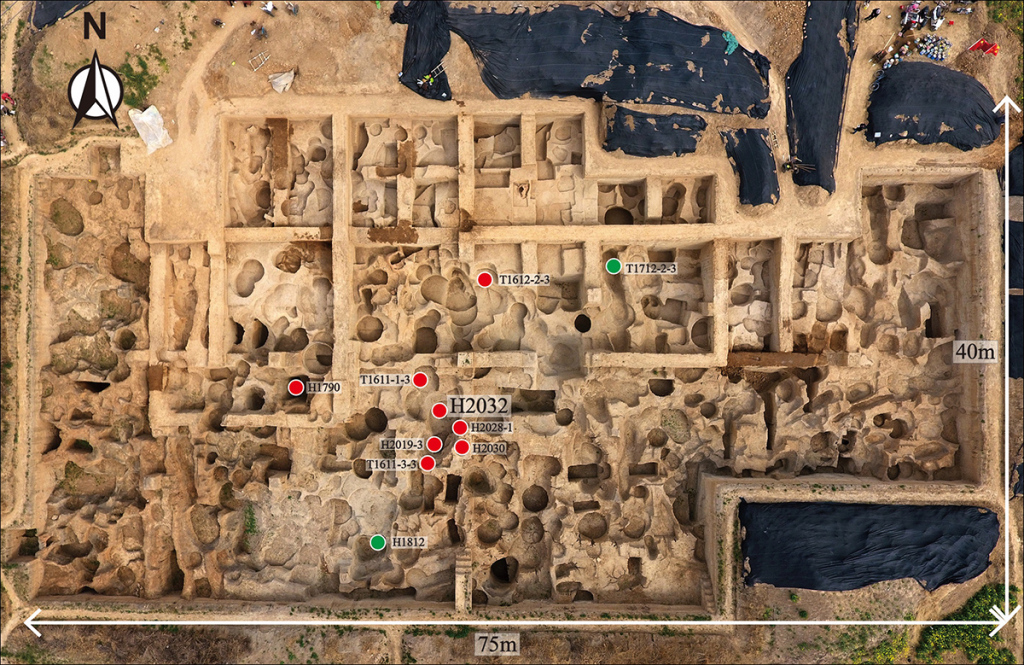 Archaeologists have uncovered the world’s oldest known coin mint, along with pieces of spade-shaped metal currency, inside a bronze foundry dating to 770 B.C.E. in Guanzhuang, China. Using accelerator mass spectrometry (AMS) radiocarbon dating, the new research, published this month in Antiquity, reveals the coin mint began operating between 640 and 550 B.C.E., after the foundry switched from producing other valuable items to creating currency.
This discovery marks Guanzhuang as the world’s oldest-known minting site. Guanzhuang is located near the Yellow River in the Central Plains of China and was founded in 800 B.C.E. It was subsequently abandoned sometime after 450 B.C.E. Archaeological excavations of the city have been ongoing since 2011, where researchers have uncovered fortifications, including wall foundations and moats. “Ceramics, burials and historical records suggest that the site was a regional centre of the Zheng State,” the researchers write.

In the outer city, just beyond the inner gate, a craft-production area was discovered. It would have once been host to workshops for the creation of bronze, ceramic, jade, and bone artifacts. Of these structures, the bronze foundry was the largest, with over 2,000 pits for production waste—some almost ten feet wide and eight feet deep. Found there were the remains of tools used to cast the artifacts, including crucibles and ladles.
Archaeologists also discovered bronze droplets, unfinished or broken bronze artifacts, and charcoal and furnace fragments. There were ceramic sherds, too, as well as over 6,000 clay molds that were used to produce high-status ritual vessels, weapons, chariot fittings, musical instruments, ornaments, and tools.
The foundry was close to Guanzhuang’s inner city and its administrative center, though researchers said it was uncertain whether the foundry began minting coins upon government orders. “It is about 150 years later [after its initial establishment] that the minting activities appeared in this foundry,” said Hao Zhao, lead author of the paper and researcher at Zhengzhou University, in a statement. Soon after its transition, however, other foundries across China followed suit.

The team found 54 clay cores for casting hollow-handled spade coins—22 unused cores and 32 discarded core heads—providing evidence that the entire minting process, including mold-making and coin-casting, was performed in the foundry. All the clay cores were very similar, meaning there was a “high degree of standardization [in the] spade coins minted at Guanzhuang,” according to the researchers. “The clay cores were carefully made with the aid of a measuring tool to regulate their size and minimize variation.”

Spade coins—some of the earliest currency in the world—are thought to represent an association between the weeding tool they are shaped after and a form of standardized money. Two spade coins were found at Guanzhuang, along with the clay molds used to cast them. The most complete example of the pair is a pointed-shoulder spade that originally measured over five inches long, with three parallel lines on its surface. “The inner clay core is still embedded in the socket of the coin handle,” write the researchers. Only the handle survives of the second fragment, but both coins would have been identical.
The Guanzhuang coin mint is the first of its kind in China ever to be dated with certainty. It also represents the world’s earliest known standardized metal currency. Other known examples include the Lydian Lion, a coin made of electrum and a predecessor to the coins of ancient Greece and Rome, and the Persian daric, a gold coin of the Achaemenid Empire.
“Making coins was one of the most revolutionary financial innovations in human history,” said Zhao, noting that wealth was easier to trade, count, and hoard after the invention of the minting process.