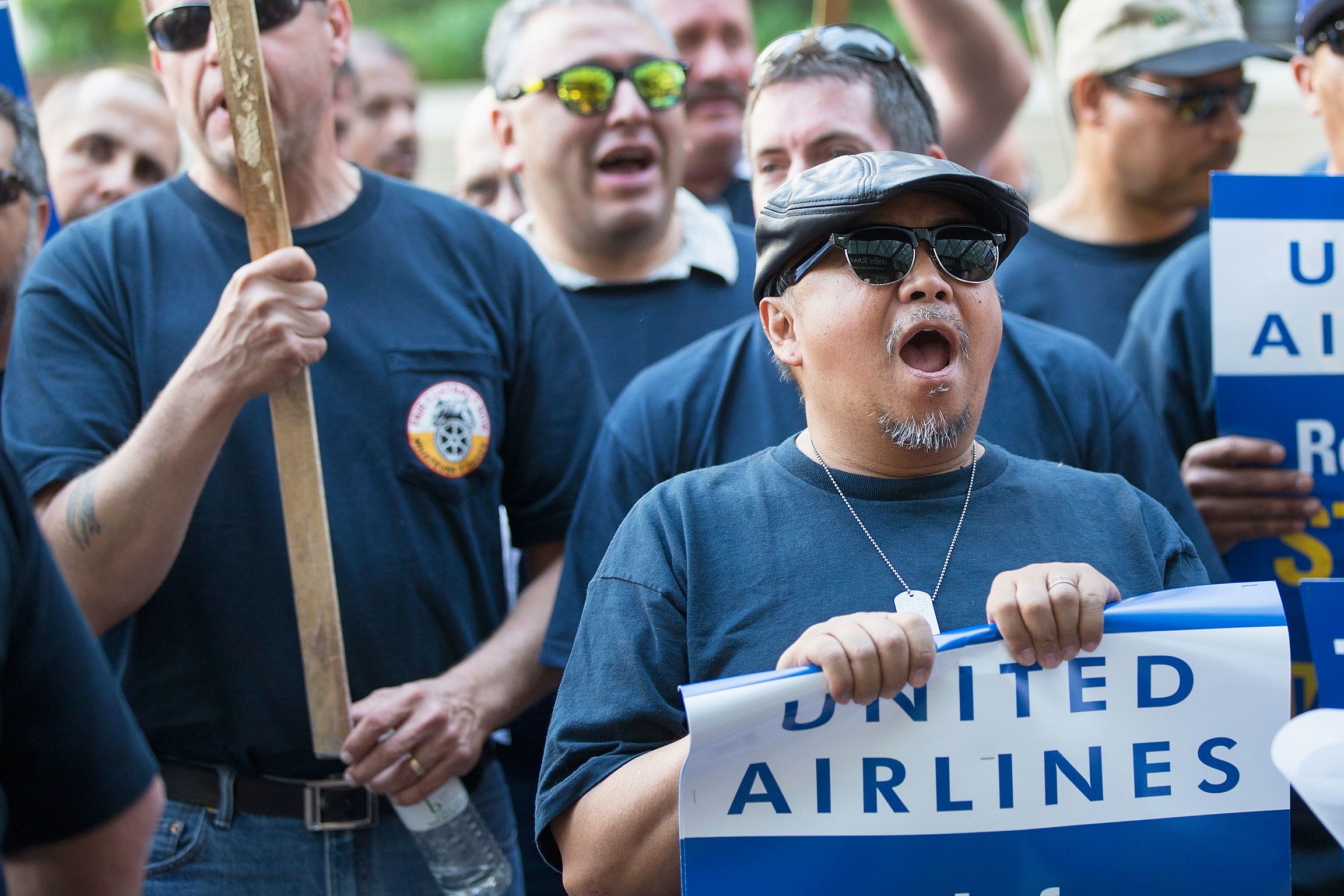 In the decade since the U.S. emerged from the recession, many industries, including airlines and automakers, have enjoyed a near uninterrupted streak of profits.

U.S. airlines, better known for their boom and bust cycles, are headed for their 10th straight year of profitability. The top four biggest airlines and three biggest automakers in the country brought in more than $25 billion in profit last year.

Now, across the U.S., workers who assemble cars, fly planes, prepare airplane food, clean hotel rooms and stock grocery store shelves, just to name a few — many of them unionized employees in the middle of contract talks — are determined to get a bigger cut of the spoils.

The contracts currently under negotiation between the United Auto Workers and Big Three Detroit automakers expire in September and will set the wages and benefits for about 158,000 employees for the next few years. The more than 37,000 pilots at the three largest U.S. airlines — Delta, United and American — are seeking higher pay and better retirement benefits after cuts in past downturns. “Our goal is to reach an agreement that continues to recognize the contributions of our pilots toward our company’s success while also positioning Delta to continue its momentum,” Delta said in a statement.

Grocers owned by Kroger and Albertsons in Southern California, including Albertsons, Vons, Pavilions and Ralph’s, are deep in negotiations with local members of the United Food and Commercial Workers in hopes of staving off their own strike. The region’s last grocery strike, fifteen years ago, reportedly cost the grocers $1.5 billion in sales.

“You can’t reverse 40 years of inequality in one to two years,” said Dean Baker, senior economist at the Center for Economic and Policy Research.

The root of the tension, economists say, is that wage growth has not kept pace with an increase in productivity and the cost of living, despite a recent uptick. That comes as U.S. unemployment is near a 50-year low and companies need those workers.

“That means someone is getting more of the money,” said Nobel Prize-winning economist Joseph Stiglitz. “It is totally understandable why workers say ‘we ought to do something.’ I think the fear is: as bad as things are now they could get worse and that if we don’t do something preemptively we’re in for even more difficulties.”

Weekly wages in the U.S. increased an average of 2.6% each year from 2008 to 2018, according to the Bureau of Labor Statistics.

Workers are now seeking not only higher pay but better working conditions, health benefits and better retirement packages, just as some companies are bracing for lower economic growth forecasts and the impact of tariffs.

Labor unions are now arguing that their members deserve higher pay as their employers are flush with profits. Their ranks had been hit by layoffs, furloughs, pay, pension and benefit cuts as their employers struggled in recessions and bankruptcy.

United Auto Workers President Gary Jones made it clear last month that union members expect to be rewarded for past work during contract negotiations this year with the Big Three in Detroit, even though U.S. auto sales this year are expected to fall below 17 million vehicles for the first time since 2014. The drop would mark the second decline in U.S. industry sales since the record of 17.55 million vehicles sold in 2016.

Non-unionized workers at JetBlue and Delta have recently organized or are considering organizing, despite company messages against it.

In May, Uber and Lyft drivers in cities from London to Los Angeles demonstrated for higher wages, some of them shutting off the ride-hailing apps during the strike. Drivers at Lyft and Uber recently won pay increases in New York.

Other companies have increased pay recently. Bank of America, for example, raised its workers’ minimum pay to $20 an hour in March.

Investors aren’t always receptive. When American Airlines announced pay increases in April 2017 for its pilots and flight attendants, not tied to contract negotiations, shares fell more than 5% that day.

“We’re seeing record profit for our American companies, it’s sad to say those gains aren’t really translating to our members,” United Auto Workers’ president Jones said during an event last month to officially start collective bargaining at Ford’s headquarters in Dearborn, Mich. “In this time of corporate prosperity, labor is still being asked to take concessions … This must stop now.”

Aviation workers are also clamoring for more pay and benefits. They argue they still haven’t fully recovered from cuts since the Sept. 11, 2001 terrorist attacks that roiled air travel demand and sparked a wave of airline bankruptcies.

“You don’t go through bankruptcy and win things,” said Dennis Tajer, a Boeing 737 captain at American and spokesman for the Allied Pilots Association, which represents American’s pilots. “It’s like a massage with a cheese grater: it hurts.”

Tensions between company management and some of their employees have grown so severe that disputes are ending up in courtrooms as companies allege workers are disrupting operations to gain leverage in contract talks.

Unions have argued their companies are aiming to please Wall Street instead of their own employees. Companies in the S&P 500 are reporting what is set to be their ninth-straight quarter of profit growth — bolstered by President Donald Trump’s 2017 corporate tax cuts. Companies have spent a lot of that windfall to buy back their own shares, to the chagrin of workers seeking higher wages. In the decade ended in March, companies in the S&P 500 have spent around In the first quarter, S&P 500 companies spent $205.8 billion on buybacks, the second-biggest sum on record after the previous quarter and 9% more than a year earlier, according to an analysis from S&P Dow Jones Indices.

United, Southwest, American and Delta’s buybacks are among the top 150 largest in the S&P over the past decade, through the first quarter of this year, according to S&P Dow Jones Indices. United spent close to $3.9 billion buying back its own shares over the last two years, the data show. The Chicago-based airline’s net income in the last two full calendar years was $4.2 billion, according to FactSet.

UAW members, meanwhile, get a slice of the automakers’ profits through profit-sharing bonuses. However the union is still trying to make up for concessions it gave up during the last economic downturn, including a decade of stagnated wages prior to 2015.

The union agreed to cut benefits and receive more substantial profit sharing in lieu of annual wage increases as a result of the Great Recession and the government-backed bankruptcies of General Motors and then-Chrysler in 2009.

Under the current four-year deals, the automakers have paid more than $4 billion in profit-sharing bonuses to UAW members. The record payments, which are based on each company’s annual earnings in North America, have averaged roughly $20,500 per worker at Fiat Chrysler, $33,400 at Ford and $45,500 for GM since 2015.

UAW members also received their first raises in a decade four years ago. Starting pay for hourly production workers is roughly $17 to $30 an hour based on seniority — well above other unionized workforces.

The profit-sharing bonuses and stagnant wages have helped the automakers control fixed costs and put labor expenses more in line with non-unionized competitors — something executives hope to continue with these negotiations.

“We cannot, we will not, repeat those actions that put us in those dangerous financial positions,” Mark Stewart, chief operating officer of FCA – North America, said last month at the company’s headquarters in Auburn Hills, Mich. “We cannot return to our old ways of doing business or we’re risking the same result.”

Airline unions, whose members weathered decades of bankruptcies and their aftermath, are now seeking more for their workers in cockpits, cabins and maintenance hangars. The strong U.S. economy is propelling travel demand and putting the country’s carriers on track this year for their 10th-straight year in the black. That’s a sharp turnaround for a capital-intensive industry known for its boom-and-bust cycles that inspired recently born-again airline evangelist Warren Buffett to tell shareholders in 2008: “Indeed, if a farsighted capitalist had been present at Kitty Hawk, he would have done his successors a huge favor by shooting Orville down.”

Between the peak in 2001 and 2011, at the depths of airline industry turmoil, the sector had shed about 28% of its workforce or 145,000 jobs, according to the Department of Transportation. Full-time equivalent airline employees are back up to more than 440,000 jobs but off the pre-9/11 peak of more than 530,000 positions.

A decade of consolidation that left four big airlines in control of most of the U.S. market and strong economic growth helped domestic carriers rake in nearly $90 billion in profits since 2010, according to Airlines for America, an industry group.

“There’s money to get,” said Orley Ashenfelter, a Princeton University economics professor who specializes in labor relations and wages. “When the company’s losing money it’s hard to say you’re important.”

Some labor tensions have grown so sour they’re ending up in courtrooms.

American Airlines, for example, said in a lawsuit this spring that it had to cancel hundreds of flights because the unions that represent its more than 12,000 mechanics were engaged in an illegal work slowdown. The unions are demanding better pay and stronger limits on how much maintenance work the airline can outsource to workers overseas and have denied the allegations. A federal court in Texas in June ordered the unions to notify workers not to engage in activities that could hurt the airline.

Pilots for Atlas Air Worldwide Holdings, one of the cargo carriers that operates Amazon’s package-delivery airline Amazon Air, in July lost their appeal to overturn an injunction against what Atlas called excessive sick calls and an illegal worker slowdown. The company said the labor dispute contributed to its disappointing quarterly earnings, which pushed down its stock 25% after it reported on Aug. 1. Pilots there have complained about grueling work hours and low pay compared with their counterparts at rivals.

Earlier this year, Southwest had a similar dispute with its mechanics, but later reached a contract with the group, their first in more than six years, and a higher pay raise than Southwest offered in previous rounds of negotiations.

Even workers that have relatively good relations with their employers are demanding better conditions. United Airlines flight attendants last winter picketed at United’s hubs around the country after the company reduced staffing on board to FAA minimums (American and Delta were already staffed at that level), saying it compromised their safety, particularly as airlines fit more seats on board.

The workers voted to strike in June. But they, like other airline employees, are under the Railway Labor Act, which prohibits work stoppages and walkouts unless they are released by the president-appointed National Mediation Board. The last commercial U.S. airline pilot strike, for example, was in 2010, when Spirit’s pilots walked off the job.

Presidential hopefuls are keenly eyeing the labor dynamic. Democratic candidates like Sens. Elizabeth Warren and Bernie Sanders attended the catering workers’ picket in Washington on July 23 as presidential hopefuls eye the growing gap between haves and have-nots as a key priority for millions of voters.

“Trump has really heightened the issue because he did win…[and] the working class was key to his victory” said Dean Baker, Senior Economist at the Center for Economic and Policy Research. “He did create more emphasis on working class issues, and then he ends up making a lot of promises. Democrats will be claiming he didn’t keep that.”