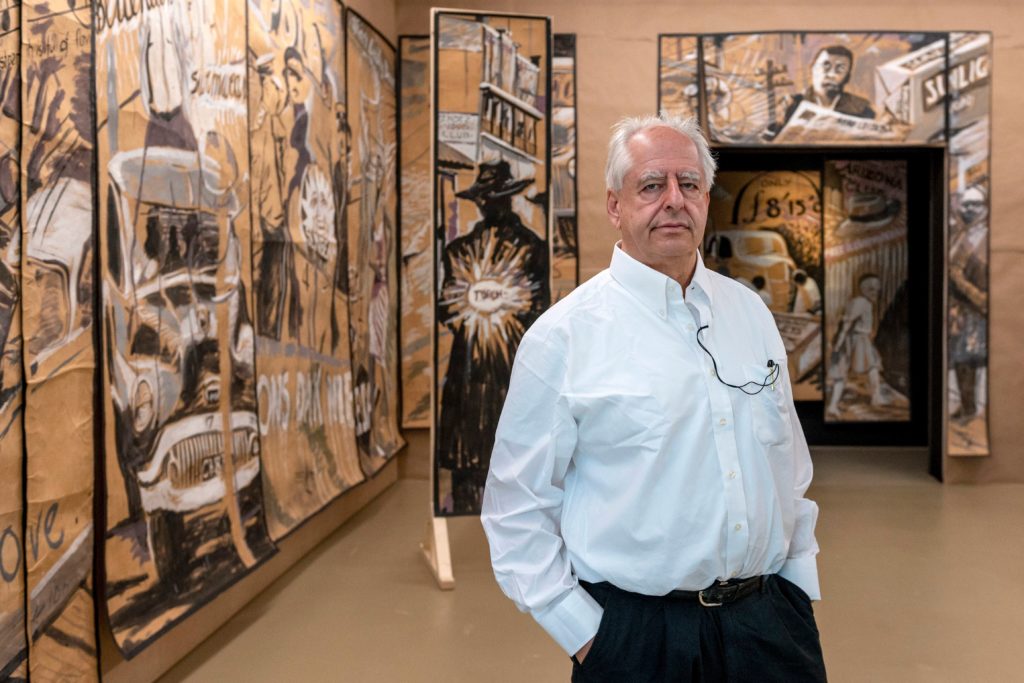 William Kentridge. GEORGIOS KEFALAS/EPA-EFE/SHUTTERSTOCK
William Kentridge and Mona Hatoum have won Praemium Imperiale awards, which recognize artistic achievement in five categories and come with honoraria of 15 million yen ($138,555 as of September 2019) each. (Kentridge won for painting, and Hatoum took home the sculpture prize.) The awards are among the largest cash prizes in the art world today.
Kentridge, whose work often addresses apartheid and ongoing political discord in his native South Africa, has a survey at the Zeitz Museum of Contemporary Art and the Norval Foundation in Cape Town. His paintings, drawings, animations, stage props, performances, and other pieces have previously been exhibited at the Museum of Modern Art in New York, the Centre Pompidou in Paris, Castello di Rivoli in Italy, and other international venues.Hatoum is currently showing work at White Cube gallery in London. Her exhibition, “Remains to be Seen,” is her first presentation in the British capital since her 2016 exhibition at Tate Modern. The artist’s sculptures and installations, which frequently feature systems of grids, explore explore global conflicts and her own personal history. Born in Lebanon to a Palestinian family, Hatoum examines the impacts of war and displacement in her practice. She was nominated for the Turner Prize in 1995, and some of her recent shows have been staged at the Museum der bildenden Künste in Leipzig and the Menil Collection in Houston.Other 2019 Praemium Imperiale laureates include architects Tod Williams and Billie Tsien, musician Anne-Sophie Mutter, and actor Bando Tamasaburo V. Painter Pierre Alechinsky and sculptor Fujiko Nakaya were among last year’s winners.