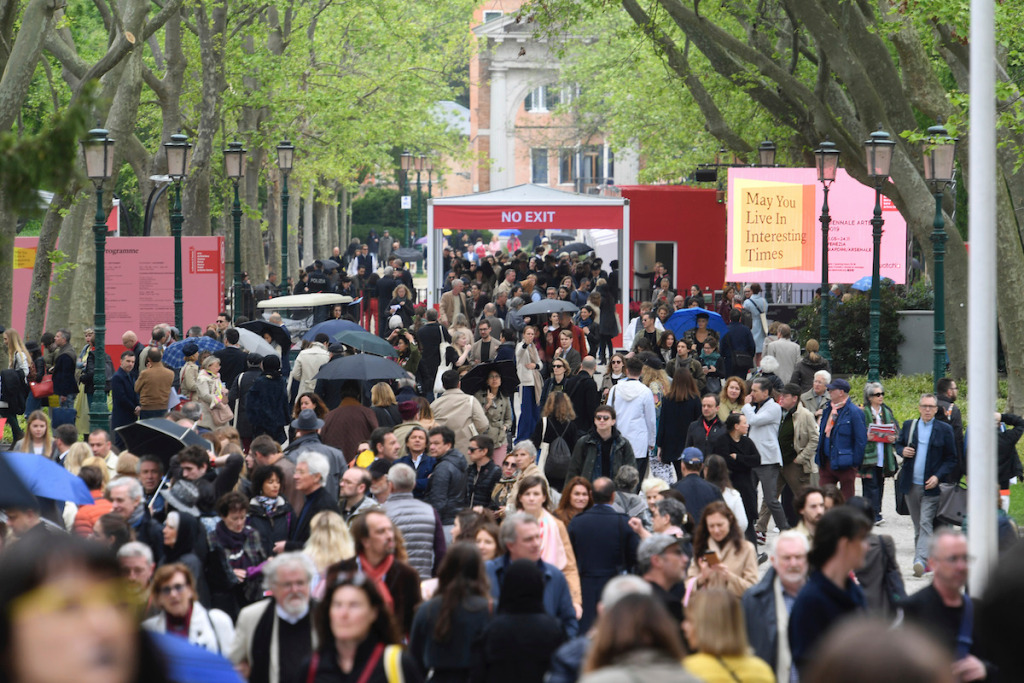 The coronavirus pandemic has upended just about every aspect of the art world’s calendar, forcing delays and cancelations of major events including fairs, auctions, and gatherings of all kinds. Biennials are no exception. Many of the world’s most eagerly awaited exhibitions planned for 2020 and 2021, from the Venice Biennale to the Whitney Biennial, have been pushed to later dates as schedules are scrambled and travel restrictions remain.
Below, a look at the biennials that have been delayed by the pandemic, including some that have already opened after being pushed back. This list will be updated as further announcements are made.

Berlin BiennaleLocation: BerlinOriginal dates: June 13–September 13, 2020New dates: September 5–November 1, 2020Whereas most biennials pushed back their 2020 editions by almost a full year, the Berlin Biennial only postponed its opening by a few months, making it one of just a few biennials to welcome visitors in 2020. Curated by María Berríos, Renata Cervetto, Lisette Lagnado, and Agustín Pérez Rubio, the biennial opened in September under conditions permitting social distancing. Many of its participants were unable to attend the opening, due to travel restrictions.
Bienal de São PauloLocation: São Paulo, BrazilOriginal dates: September 5–December 6, 2020New dates: September 4–December 5, 2021The Bienal de São Paulo’s 2020 edition was intended to be particularly ambitious, with a tiered opening and several exhibitions by commissioned artists preceding the main event. But those plans were scaled back, and then, as Brazil became one of the countries hardest hit by the pandemic, the main exhibition was pushed back almost an entire year. Jacopo Crivelli Visconti is lined up to curate.
Biennale de LyonLocation: Lyon, FranceOriginal dates: September 2021–January 2022New dates: Fall 2022While biennials are delayed for practical reasons, the 2021 Biennale de Lyon was postponed over ethical concerns as well. The Art Newspaper reported that its curators, Sam Bardaouil and Till Fellrath, wanted to push the exhibition because they were unable to visit Lyon for months after the lockdown started. “With resources more scarce than ever, we felt that by pushing the biennale into 2022, we would not be competing for public and private resources now and in the very near future, and therefore exercising a burden on the community, when other urgent causes—health, food, shelter, schools—require immediate sustenance,” Bardaouil said. “There are other, more pressing daily life matters that need to be met as people grapple with their losses in the wake of the coronavirus crisis.”

Front International: Cleveland Triennial for Contemporary ArtLocation: Cleveland, Akron, and Oberlin in OhioOriginal dates: July 17–October 2, 2021New dates: July 16–October 2, 2022Front International, one of the biggest biennial-style exhibitions in the U.S., became one of the first shows of its kind to be delayed when the announcement was made in early April, just weeks after the lockdown began in most parts of the country. Curated by Projects Projects founder Prem Krishnamurthy and Art21 executive director and chief curator Tina Kukielski, it is to be titled “Oh, Gods of Dust and Rainbows.”
Gwangju BiennaleLocation: Gwangju, South KoreaOriginal dates: September 4–November 29, 2020New dates: February 26–May 9, 2021South Korea was among the countries praised early on for its successful efforts to contain the coronavirus, and the organizers of the Gwangju Biennale—one of the most well-attended biennials worldwide—decided not to have the exhibition as planned, pushing it back half a year. Curated by Natasha Ginwala and Defne Ayas, it is now taking place in 2021.
Liverpool BiennialLocation: Liverpool, EnglandOriginal dates: July 11–October 25, 2020New dates: March 20–June 6, 2021As the virus swept across the U.K. in April, the Liverpool Biennial, which is being curated by Manuela Moscoso, became one of the first exhibitions of its kind to get delayed. “Together, we are facing a crisis: a slowly evolving tragedy that will require strength, adaptation and endurance to overcome,” Fatos Üstek, the biennial’s artistic director, said at the time.

ManifestaLocation: Marseille, FranceOriginal dates: June 7–November 1, 2020New dates: August 28–November 29, 2020Curated by Alya Sebti, Marina Otero Verzier, Katerina Chuchalina, and Stefan Kalmár, Manifesta opened a few months later than planned this summer with significantly decreased attendance—and many museum trustees and patrons reportedly canceled their visits to see it.
Sharjah BiennialLocation: Sharjah, United Arab EmiratesOriginal dates: Opens March 2021New dates: Opens March 2022The biggest biennial in the Middle East was pushed back a year after the Sharjah Art Foundation’s March Meeting, a closely watched curatorial convening, was moved to 2021, the year the Sharjah Biennial was originally expected to take place. Its curatorial concept comes courtesy of Okwui Enwezor, who began organizing it before he died in 2018.
SonsbeekLocation: Arnhem, the NetherlandsOriginal dates: June 5–September 13, 2020New dates: 2021The esteemed Dutch biennial featuring works set around a city park announced the delay of the latest edition (curated by Bonaventure Soh Bejeng Ndikung) early on in March. “The health and safety of the artists, curators, staff, and audiences of sonsbeek 20→24 has always been and remains of utmost importance,” the biennial said in a statement. “Postponing the opening of the fully curated and conceived edition which was scheduled to open in less than three months time, is extremely disappointing and painful for everyone involved in the 12th edition of sonsbeek.”
Venice BiennaleLocation: Venice, ItalyOriginal dates: Spring 2021New dates: April 23–November 27, 2022In May, both the Venice Architecture Biennale and the Venice Biennale were pushed, to 2021 and 2022, respectively. With the postponement, the Venice Biennale will now coincide with Documenta 15 in Kassel, Germany, another premier art event. Cecilia Alemani, the Biennale’s artistic director, has promised that the 2022 edition won’t be a “coronavirus biennial.”
Whitney BiennialLocation: New YorkOriginal dates: Spring 2021New dates: April–August 2022The top biennial in the U.S. was pushed back a full year so that its host institution, the Whitney Museum in New York, could focus on its exhibition program, which includes a Jasper Johns retrospective now dated for 2021. David Breslin and Adrienne Edwards are lined up to curate.