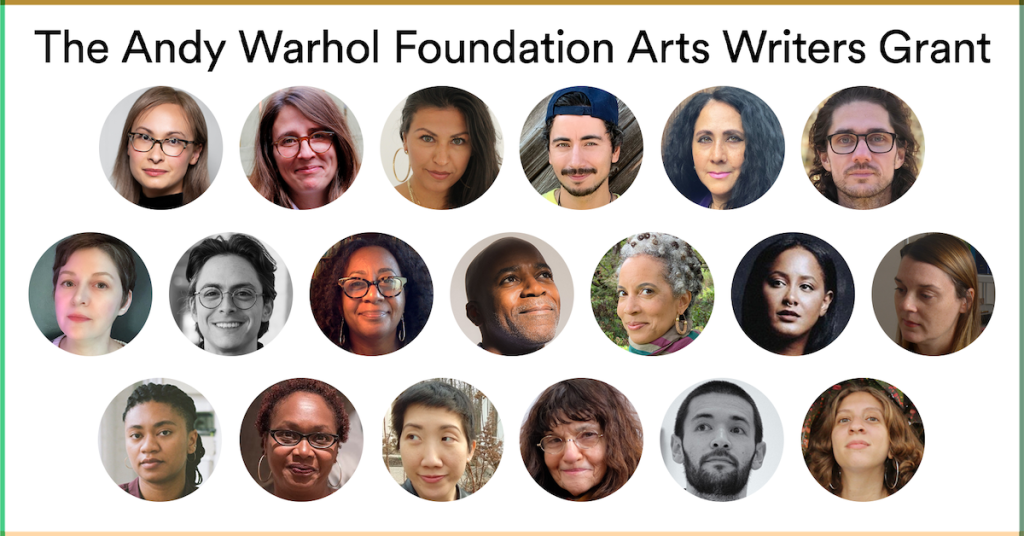 Twenty-two writers will receive grants from the Andy Warhol Foundation Arts Writers Grant Program, which this year is awarding $675,000 in funds intended to go toward new writing projects.
The grants, which range in scale from $15,000 to $50,000, are awarded in to people pursuing articles, books, and short-form writing. Among those set to take home grants for short-form writing this year are Jessica Lynne, a cofounder of the website Arts.Black, who will write about intergenerational histories of Black women artists, and Amy Taubin, a well-known film critic whose project will explore the “time machine of cinema available on our home screens,” according to a statement.

And among those receiving awards for articles are Cecilia Fajardo-Hill, the co-curator of a traveling 2017 show of Latin American women artists that first opened at the Hammer Museum in Los Angeles, and artist Naeem Mohaiemen, who shares his award with Anjali Singh. They will consider the art of Patssi Valdez and the ethics of photography, respectively.
The grants program’s project director, Pradeep Dalal, said in a statement, “Today’s politically charged moment is palpable in the work of the writers selected to receive grants this year.”
The full list of grantees follows below.
ArticlesAngie Baecker, “The Art Group and the Avant Garde: Collective Practices and the Socialist Legacy in Contemporary China”Cecilia Fajardo-Hill, “Patssi Valdez: ‘I dare you question me,’ A Radical Photographic Portraiture”Erica Moiah James, “Juan Francisco Elso: La luz de las cosas / The Light of Things”Arnold Joseph Kemp, “Who is this black, queer curator? If you don’t remember it and do him, his last name is McShine”Oluremi C. Onabanjo, “The Conditions of the Archive: Marilyn Nance and FESTAC 77”
BooksSergio Delgado Moya, A Nervous Archive: Sensationalism and the Potency of HorrorAriel Goldberg, Just Captions: Ethics of Trans and Queer Image CulturesNaeem Mohaiemen + Anjali Singh, Harmit Singh’s WarJerry Philogene, The Socially Dead and Improbably Citizen: Visualizing Haitian LiberationJeannine Tang, Living Legends: The Art and Care of Queer and Transgender HistoryJoseph L. Underwood, Forging a New Contemporary: Art from Senegal in Transnational Networks, 1974–1984