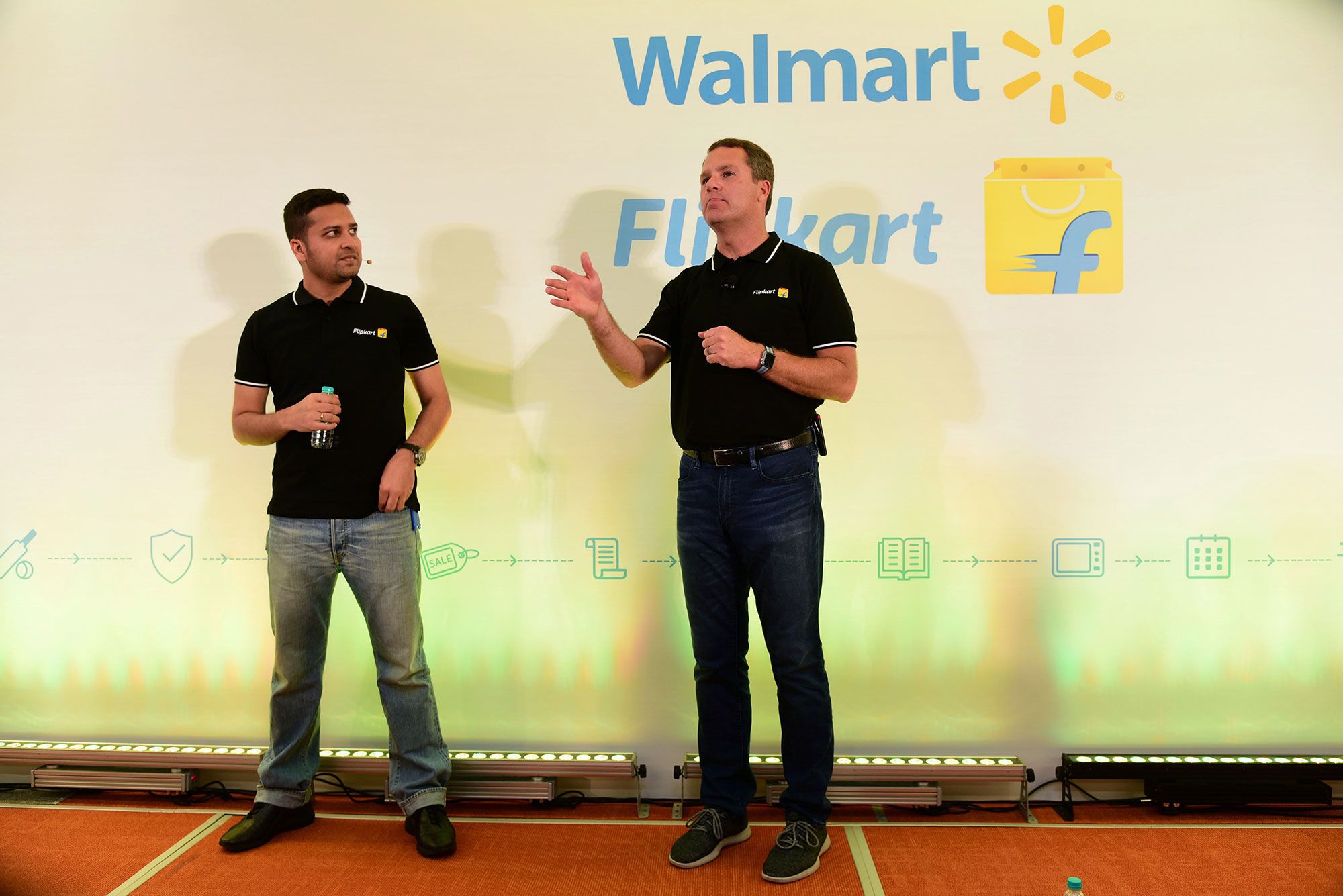 Walmart told the U.S. government privately in January that India’s new investment rules for e-commerce were regressive and had the potential to hurt trade ties, a company document seen by Reuters showed.

The lobbying effort yielded no result at the time — India implemented the new rules from Feb. 1 — but the document underlines the level of concern at Walmart about the rules. Differences over e-commerce regulations have become one of the biggest issues in frayed trade ties between New Delhi and Washington.

“It came as a total surprise … this is a major change and a regressive policy shift,” Walmart’s Senior Director for Global Government Affairs Sarah Thorn told the Office of the United States Trade Representative (USTR) in an e-mail on Jan. 7.

Walmart CEO Doug McMillon (R) speaking next to Flipkart co-founder and CEO Binny Bansal at an event in Bangalore.

In a statement to Reuters on Thursday, Walmart said it regularly offers input to the U.S. and Indian governments on policy issues and this was a “past issue and Walmart and Flipkart are looking ahead”.

“Walmart has had good consultations with the government of India,” a company spokeswoman added.

The USTR did not respond to a request for comment.

In the January letter to the USTR, Walmart said it wanted a six-month delay in the implementation of the rules, but that did not happen. Washington did raise concerns about the policy with New Delhi, but India gave a non-committal response, an Indian trade ministry official told Reuters at the time.

Walmart’s problems in India highlight the regulatory complications it faces as it restructures its international business to boost growth and online sales. Mexico’s competition regulator recently blocked its acquisition of delivery app Cornershop, while in Britain it was stopped from merging its British arm Asda with rival Sainsbury’s.

These issues, however, have failed to unnerve Walmart investors. Walmart shares have risen 21%, compared with a 19% increase for the S&P 500 since the start of the year.

A USTR delegation led by Christopher Wilson, Assistant U.S. Trade Representative for South and Central Asia, was to meet Indian officials in New Delhi on Friday to resume discussions on trade ties and the e-commerce issue was likely to be high on the agenda.

In its January representation, Walmart told the USTR that India’s new policy wasn’t good for global businesses, highlighting that its foreign direct investment would help Flipkart grow and result in “significant” tax revenues for New Delhi.

The new rules barred companies from selling products via firms in which they have an equity interest and also from making deals with sellers to sell exclusively on their platforms.

Amazon.com Inc removed thousands of products from its India website briefly in February as it initially struggled to comply with the new policy. Flipkart was forced to rework some of its vendor relationships, sources told Reuters at the time.

The policy, implemented by Prime Minister Narendra Modi months before his re-election in May, was seen aimed at winning the support of small Indian traders, who had long complained they were losing business due to the steep discounts offered by foreign e-commerce giants.

“The action appears in every respect … intended to placate Indian companies and local traders,” Walmart told the USTR.

Reuters obtained the two-page representation Walmart sent to the USTR through a Freedom of Information Act request first filed in January. The USTR in February provided a heavily-redacted version of the document, citing confidentiality reasons. In consultation with Walmart, it withdrew most of those redactions this week following an appeal from Reuters.

Although Reuters asked for both Amazon and Walmart’s communications, the USTR responded saying it found only one e-mail with Walmart’s representation between Dec. 22 and Jan. 28, the period for which the records were searched.

Since the policy has been announced, Indian oil-to-telecoms conglomerate Reliance Industries has repeatedly talked about its plans to diversify into e-commerce.

Walmart’s document released to Reuters did not name Reliance, but the Bentonville, Arkansas-based company argued the policy discriminated against foreign firms, and not just in favor of small domestic players.

“The purported rationale of such regulations is to protect small retail players who are seen to be threatened,” Walmart said, but added: “This argument does not account for why there should be differentiated treatment between large foreign eCommerce companies, and large domestic companies.”

In the past six months, several Walmart executives have also weighed in publicly on India’s new e-commerce policy, including Chief Executive Doug McMillon, who said in February the company was disappointed by the Indian government’s decision.

“We hope for a collaborative regulatory process going forward, which results in a level playing field,” he said.

India’s Commerce Minister Piyush Goyal has said the government was committed to protecting small traders, but open to ironing out policy-related issues. Goyal said on Twitter on Wednesday he had met Walmart International’s CEO, Judith McKenna, and discussed ways of boosting sales of Indian-made products.

In a closed-door meeting last month, however, Goyal warned both Flipkart and Amazon to comply with the new rules in letter and spirit, and questioned them on their discounting policies, Reuters has reported.

The Walmart spokeswoman on Thursday said that, in line with the company’s commitment to India, it looked forward to contributing to the country’s retail ecosystem.

Amazon was not aware of Walmart’s January representation to the USTR, according to a person with direct knowledge. The company in a statement said it continued to engage with New Delhi to enhance infrastructure and create jobs.

Walmart told the USTR in January that its unit Flipkart, as well as Amazon, had opened many new distribution centers over the past three years in India, creating thousands of jobs and greatly benefiting to consumers.

It warned of “serious consequences” if the new policy was implemented hastily. “The lack of policy stability makes it very difficult for companies to continue planned investments, both in the eCommerce sector and beyond,” Walmart wrote.