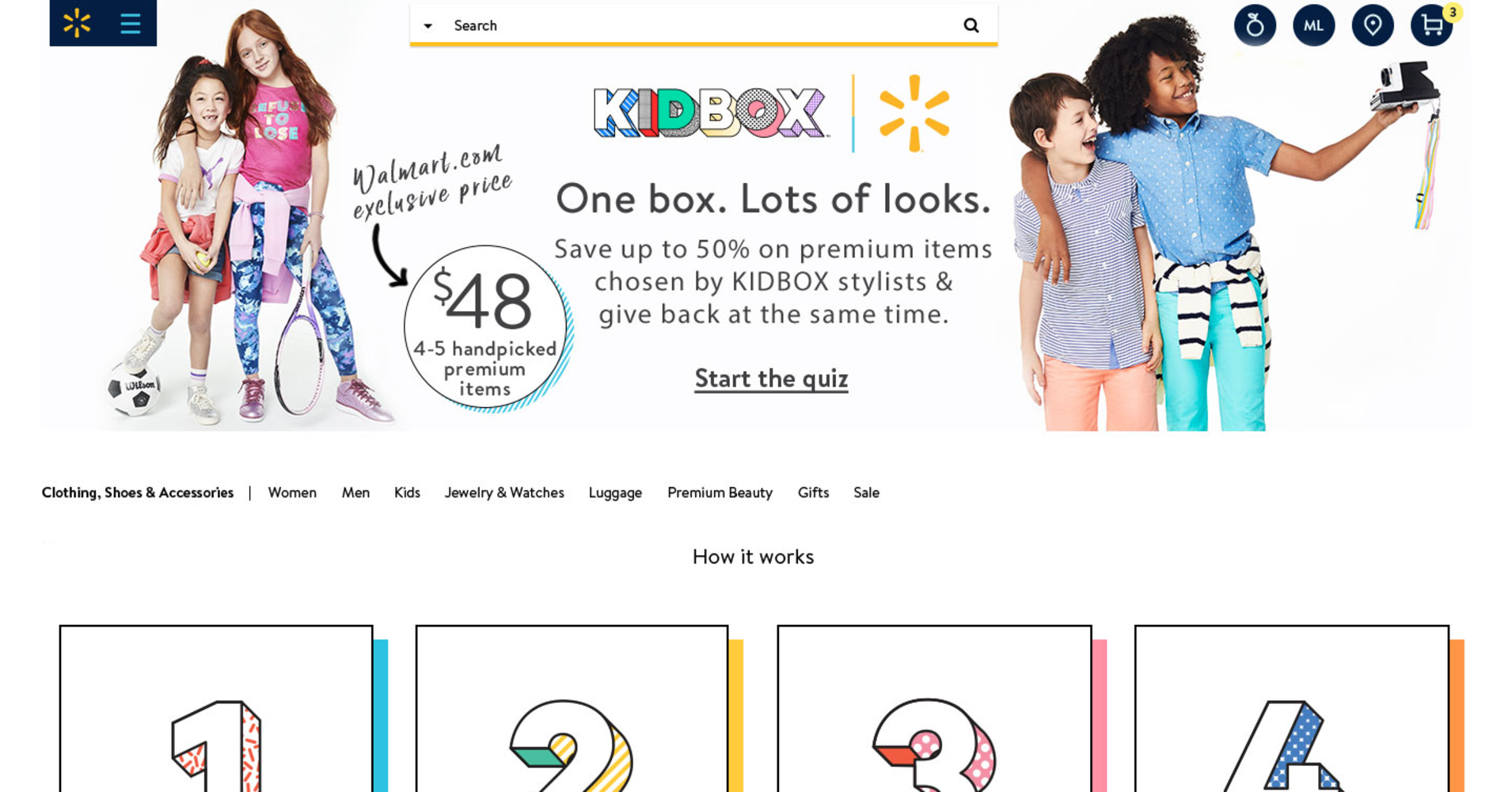 Walmart is finally getting into the subscription business for apparel.

The retailer on Tuesday announced it’s partnering with Kidbox, a subscription-box company akin to Stitch Fix but focused solely on selling clothes for babies, girls and boys.

Now, Walmart shoppers will be able to purchase as many as six different boxes from Walmart.com, curated by Kidbox, each year. That means there’s one new box available for each season, as well as for going back to school and the holidays, the companies said. Each box will include four to five items and cost $48, which Walmart says will be about 50 percent off the suggested retail price. Parents will have the option to either keep all the items in the box for no additional fees, or return everything and receive their money back. Kidbox curates the boxes based on a styling quiz that’s completed before an order is placed.

The move comes as Walmart has been growing its apparel business through a handful of different approaches, including a partnership with Lord & Taylor, which allowed it to add premium brands to its website. It’s also been adding more in-house brands for women, men and children to stores. And it’s announced a slew of celebrity partnerships within the past few months for exclusive clothing and accessories lines, including one with comedian Ellen DeGeneres, and another with Kendall and Kylie Jenner.

Particularly within the kids’ category, though, Walmart has been investing even further, adding hundreds of new children’s apparel brands to its website, like Levi’s and The Children’s Place, while also redesigning Walmart.com so that shoppers can specifically browse apparel for licensed characters, or for activities like gymnastics and dance.

The Kidbox deal, similar to Walmart’s tie-up with Lord & Taylor, is viewed as a way for the retailer to add more high-end brands to its website, as it continues to try to target more affluent shoppers and compete with Amazon. Some of the kids’ clothing brands found on Kidbox’s platform today include BCBG, 7 For All Mankind, Joe’s Jeans and sock maker Bombas.

“Our partnership with Kidbox enables us to round out our offering with additional national and premium kids’ brands,” said Denise Incandela, head of fashion for Walmart’s e-commerce business in the U.S.

With baby and children’s apparel retailer Gymboree filing for bankruptcy in the U.S. and shutting hundreds of stores, analysts say there’s room for one retailer — or a few of them — to step in and fill the void. Target has found incredible success with its Cat & Jack line of kids’ clothing, which brought in more than $2 billion in sales in its first year in business. Gap tested out kids’ subscription boxes, but it ended the effort after a 14-month pilot.

Stitch Fix has a children’s category, now, while Rent the Runway — which offers apparel on a rental basis — just earlier this month announced it would be getting into kids’ clothing. Foot Locker, meanwhile, recently invested $12.5 million in kids’ clothing company Rockets of Awesome, which offers boxes to parents as a subscription, but clothing can also be purchased a la carte.

In 2014, Walmart launched a subscription box, Beauty Box, which sends out samples of beauty products, like face masks and make-up remover, four times per year, for just $5 per box.