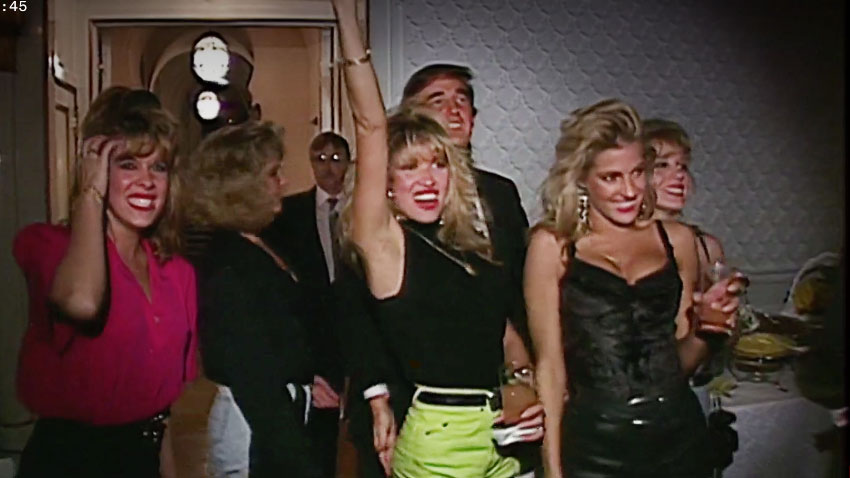 President Donald Trump sure looked like he was a fan of Jeffrey Epstein in 1992.

A newly surfaced video reveals Trump happily partying in November of that year at his Mar-a-Lago estate in Florida with Epstein, a wealthy financier who since then has become both a registered sex offender and an accused child sex trafficker.

The video, from NBC’s archives, also shows Trump matter-of-factly grabbing from behind the waist of a young woman, pulling her back into him — and then casually tapping her bottom with his right hand.

Elsewhere on the same video, Trump beams as he is surrounded by and dances with other young women.

And when he stands with Epstein checking out the dance floor of the shindig at the Palm Beach estate, Trump is seen gesturing toward a woman and appears to say to Epstein: “Look at her, back there … she’s hot.”

Epstein smiles and nods in response, the tape shows.

At the time, the real estate developer and casino owner Trump was newly divorced from his first wife, Ivanka, and a year away from wedding his second wife, Marla Maples.

A video still from the NBC archive showing Donald Trump talking with Jeffrey Epstein at a party in Mar-A-Lago from 1992.

Epstein, 66, was arrested by federal authorities in earlier this month and charged with sex trafficking.

The U.S. Attorney’s Office for the Southern District of New York says say that from 2002 through 2005, Epstein arranged for dozens of underage girls to visit him under the pretext of giving him massage at his New York and Florida mansions, where he engaged in sex acts with them.

Some of the girls were as young as 14 years old, according to prosecutors.

Since that arrest, Trump has said of Epstein, “I knew him like everybody in Palm Beach knew him.”

“I wasn’t a fan,” Trump claimed last week, after saying he did not believe he had seen Epstein in 15 years or so.

But the two men seemed very friendly after Epstein showed up at the Mar-a-Lago party, which featured cheerleaders for the Buffalo Bills and the Miami Dolphins professional football teams.

Trump, who warmly greeted Epstein and two other people when they arrived, is seen on the video smiling and clapping along with the music stands beside Epstein.

Epstein at one point doubled over laughing after Trump whispered something in his ear.

The White House did not immediately respond to a request for comment about the video, which was shot by NBC for Faith Daniels’ talk show, “A Closer Look,” as part of a profile of Trump’s lifestyle.

In 2002, Trump told New York magazine that Epstein was a “terrific guy” who is “a lot of fun to be with.”

“It is even said that he likes beautiful women as much as I do, and many of them are on the younger side,” Trump told the magazine at the time.

“No doubt about it – Jeffrey enjoys his social life.”

In addition to counting Trump as a friend, Epstein also had been a friend of Britain’s Prince Andrew.

Epstein pleaded guilty in 2008 to prostitution-related Florida state charges after a probe into allegations that underage girls had visited his Palm Beach home for massages and sexual acts.

Last week, Trump’s Labor secretary, Alex Acosta, resigned after outrage over his signing off on a controversial non-prosecution plea deal with Epstein, which allowed him to escape being federally charged in 2008.

Epstein served 13 months in prison on the state case.

He has pleaded not guilty on the new federal charges, which were filed this month in U.S. District Court in Manhattan. He faces up to 45 years in prison if convicted.

A judge is set Thursday to decide whether to grant Epstein bail.

Epstein, who is willing to post a bond of upward of $100 million, remains locked up in a jail in lower Manhattan.