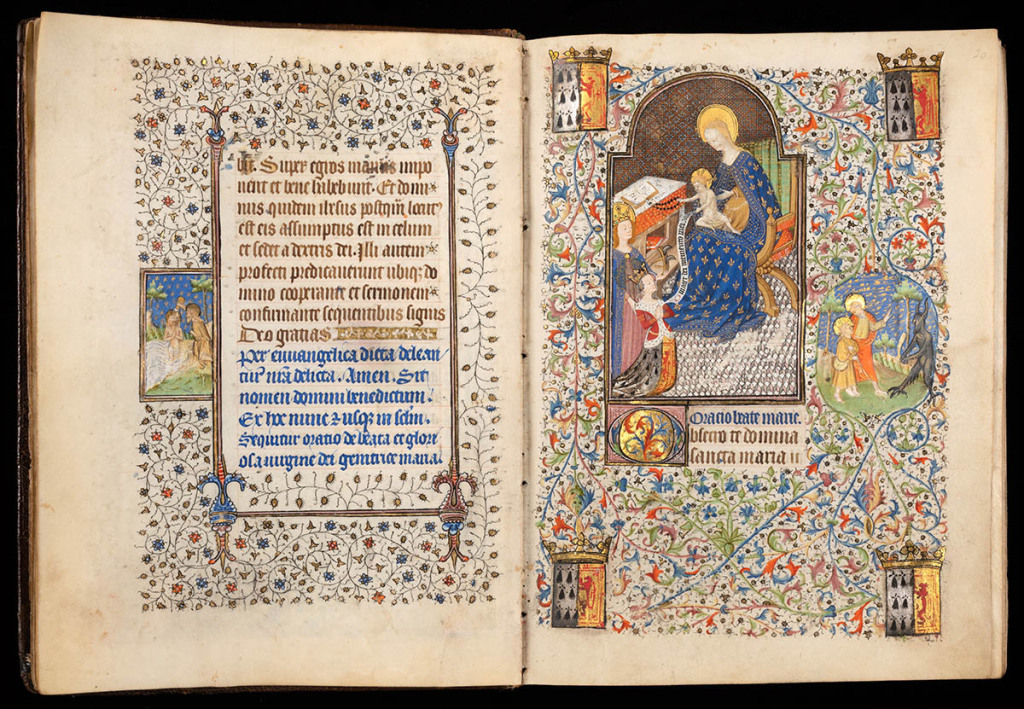 New research using near-infrared imaging has revealed hidden paintings of Yolande of Anjou, first wife of Duke Francis I of Brittany, in a medieval prayer book, Live Science reports. Scientists at the University of Cambridge, where the book is held in the collection of the Fitzwilliam Museum, noticed a darker area on one of the pages. It ultimately proved to be Yolande’s headdress painted over in azurite, which made it stand out from the surrounding ultramarine blue.
A book of hours is an illustrated Christian prayer book that was popular in the Medieval era. Commissioned by the French duchess of Anjou Yolande of Aragon as a wedding gift in 1431, the book belonged to her daughter Yolande of Anjou until her death in 1440.

It appears that Duke Francis had Yolande painted over after she died to resemble his second wife, Isabella Stuart of Scotland. Both the original figure of Yolande and the repainted Isabella were shown kneeling in prayer beneath the Virgin Mary. An image of Saint Catherine and Isabella’s coat of arms—the lion rampant of Scotland beside the ermine canton of Brittany—were also added throughout the manuscript.

View of the original underdrawing with the virgin’s robe reaching the margin with the kneeling figure of first wife Yolande of Anjou with a large headdress.
Courtesy the Fitzwilliam Museum, Cambridge, England.

Suzanne Reynolds, curator of manuscripts at the Fitzwilliam Museum, told Live Science that the inclusion of St. Catherine of Alexandria “indicates that Isabella may have had a special devotion to this saint.” Researchers believe the manuscript was adapted and personalized for Isabella in preparation for her wedding to Francis in 1442.
One of the most elaborately illustrated books of hours known to survive, the prayer book was passed down to one of Francis and Isabella’s two daughters, Margaret, who added an image of herself kneeling before Mary. This manuscript, featuring over 500 figurative scenes, includes rich shades of blue and red, along with gold leaf, shell gold and silver, and intricate border decorations. The volume’s final private owner, the Anglo-Irish nobleman Robert Fitzwilliam, donated it along with paintings and manuscripts to the Fitzwilliam Museum’s founding collection in 1816.
The book is currently on view in the exhibition “The Human Touch” at the Fitzwilliam Museum in Cambridge, England through August 1.