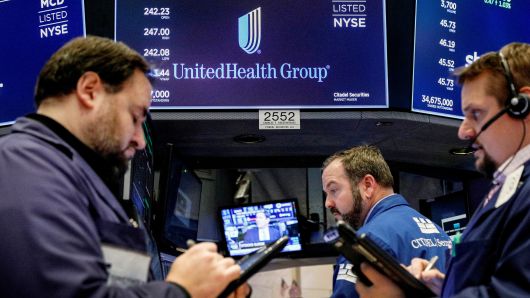 Traders work at the post where UnitedHealth Group is traded on the floor of the New York Stock Exchange.

UnitedHealth Group shares fell for a second straight day Wednesday, weighed down by concerns over possible changes to the U.S. health-care system, including creating a government-run system to provide health insurance for all Americans.

The stock is down 13.3% so far in April, on track for its biggest one-month decline since February 2009 when it fell 30.64%. UnitedHealth shares initially rose Tuesday after it reported first-quarter earnings and revenue that beat Wall Street’s expectations. But the stock quickly gave up those gains on jitters from investors over drug pricing reform and “Medicare for All” proposals from Democratic lawmakers.

Overall, health care has been the worst-performing sector in the stock market this year, rising by just 0.10% as of Wednesday, significantly lagging the broader market indexes. The Dow Jones Industrial Average is up 13.31% over the same period, and the S&P 500 is 15.95% higher.

A number of Democratic proposals call for eliminating private health insurance and replacing it with a universal Medicare plan, claiming it would help reduce administrative inefficiencies in the health-care system. Most recently, Sen. Bernie Sanders of Vermont unveiled a bill that would create a government-run system to provide health insurance for all Americans. Freshman Rep. Alexandria Ocasio-Cortez of New York is pushing a similar plan.

UnitedHealth CEO David Wichmann, who rarely discusses politics, addressed those Medicare for All proposals in a post-earnings conference call Tuesday. He said such measures would “surely jeopardize the relationship people have with their doctors, destabilize the nation’s health system and limit the ability of clinicians to practice medicine at their best.”

Despite concerns from UnitedHealth, public support for a single-payer system has grown. According to a survey by the Kaiser Family Foundation last month, 56% of respondents supported a national health plan in which all Americans would get insurance from a single government plan, versus 39% who said they oppose it.