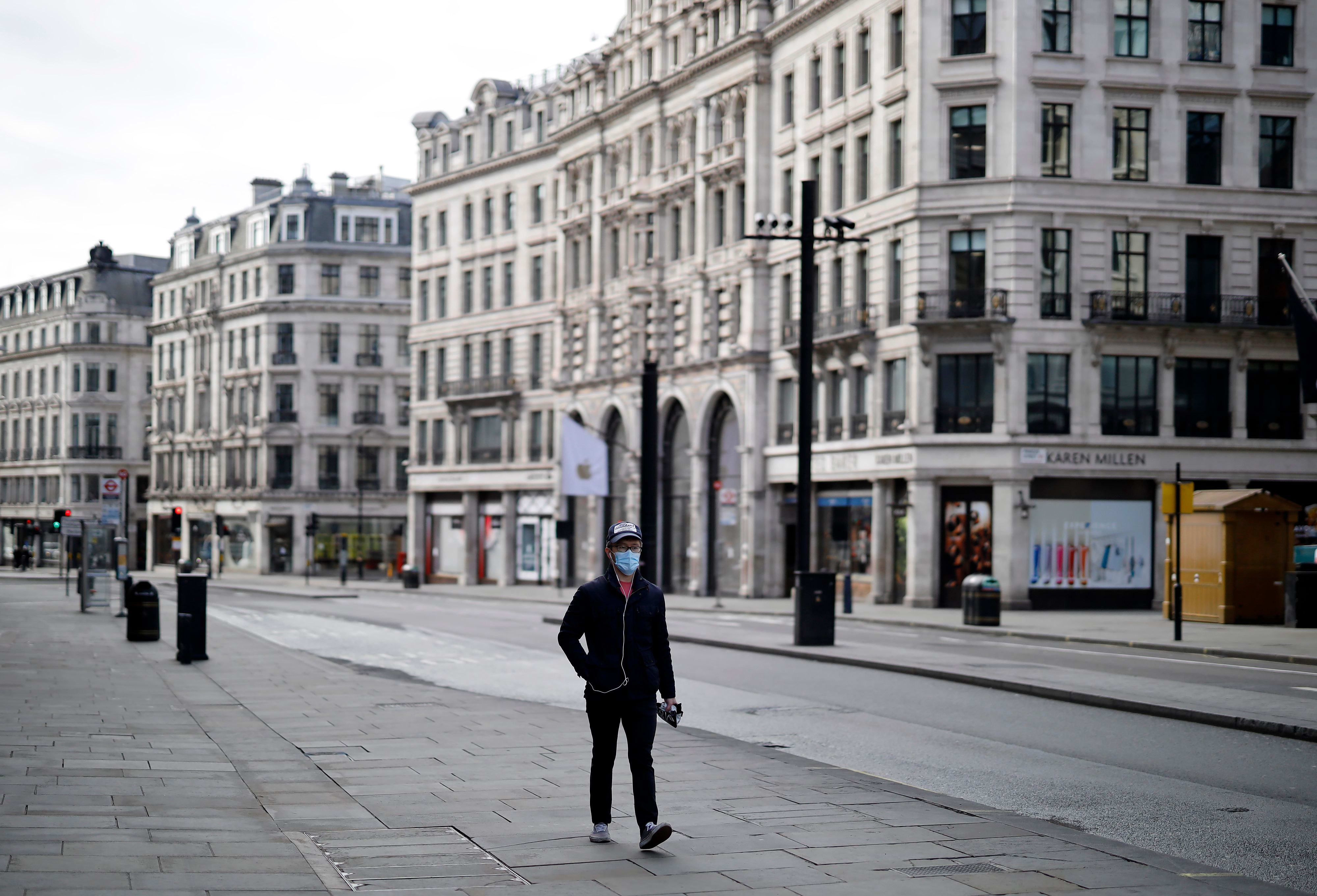 A pedestrian walks past closed-down shops on an empty Regent Street in London on April 2, 2020, as life in Britain continues during the nationwide lockdown to combat the coronavirus pandemic.Tolga AkmenThe U.K. posted the biggest monthly fall in GDP (gross domestic product) in the country’s history in April, according to the Office for National Statistics.GDP fell by 20.4% compared to the previous month, a sharper contraction than the 18.4% expected by analysts polled by Reuters. This represented a 24.5% decline from April 2019, as lockdowns necessitated by the coronavirus pandemic hammered economic activity.In the three months up to the end of April, the economy contracted by 10.4% compared to the previous three-month period, the ONS also confirmed, again falling below analyst expectations of a 10% decline.Britain entered lockdown on March 23 in a bid to curtail the spread of the coronavirus pandemic, but has confirmed 292,860 infections as of Friday morning, according to Johns Hopkins University data. Some measures began to be eased in May, but the vast majority of the U.K. economy was stymied throughout April.”Q1 GDP figures highlighted the damage caused by just the first few weeks of lockdown — the Q2 estimates expected later this month will show output in a crater,” said Ed Monk, associate director for Personal Investing at Fidelity International.”However, with social distancing measures starting to relax, businesses slowly returning to work, and moves to reopen non-essential shops from Monday, the economy is gradually reopening and the growth number will hopefully spring back in the months ahead. The question is by how much, and the ability of companies to stay afloat and retain staff is now key.”Sterling was fairly steady after the data release, trading at $1.2575 on Friday morning London time. Howard Archer, the chief economic advisor to the EY ITEM Club, said in a note that the country’s economy is likely headed for a “substantial, record contraction in the second quarter,” which could be in excess of 13%.”Assuming the Government continues to gradually relax the lockdown restrictions, the economy is expected to start to return to clear growth in the third quarter. Pent-up consumer demand following the lockdown should help, while global economic activity should also be stronger from the latter months of 2020 onwards. There will be challenges, with unemployment likely to rise significantly in the coming months,” he said in the note.Britain is still locked in trade talks with the EU and is yet to fully finalize its split with the bloc. Business groups have warned over the dangers of a no-deal Brexit scenario as the coronavirus pandemic risks scuppering talks this year.On Wednesday, the OECD warned that the U.K. was likely to be the hardest-hit developed economy as it predicted U.K. GDP to decline 11.5% in 2020, slightly worse than Italy and France’s forecasted slump, and potentially even more (by 14%) if there was a second wave of infections. Moody’s ratings agency warned in a report Wednesday that a no-deal Brexit would “significantly damage the U.K.’s potentially fragile recovery from its deepest recession in almost a century” following the pandemic.—CNBC’s Holly Ellyatt contributed to this article.