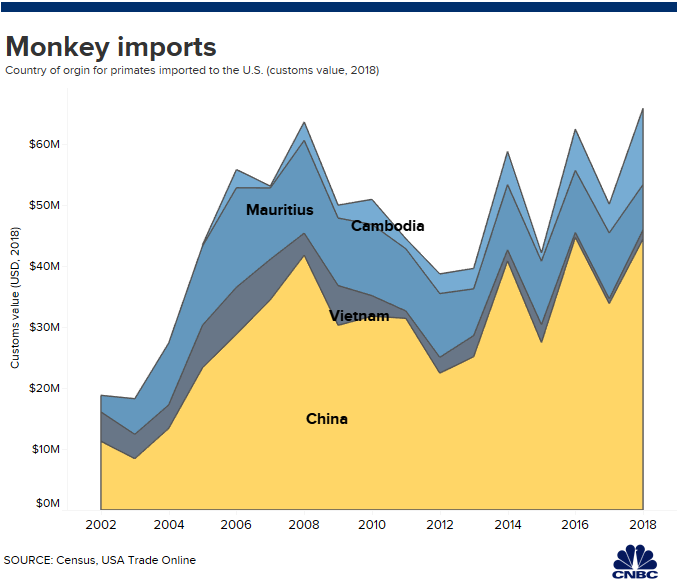 A rhesus monkey on a calorie-restricted diet (left) and a control group monkey (right) who were subjects in a pioneering long-term study of the links between caloric restriction and aging at the University of Wisconsin’s Wisconsin National Primate Research Center.

The Trump administration is set to impose a 15% levy on $300 billion worth of Chinese imports as part of the escalating U.S.-China trade war. The first of those tariffs will go into effect Sept. 1 with the remainder imposed Dec. 15.

The new tariffs are a concern for U.S. researchers who are struggling to acquire live animals in the midst of intense scrutiny from animal rights groups and continued bans by airlines on transporting them. Animal rights activists, in contrast, view the tariffs as a temporary victory that could slow down the imports of monkeys.

“Subjecting nonhuman primates to increased tariffs would severely damage vital primate research in the United States, [and] create a strong incentive for U.S.-based research and development to migrate to China,” said Matthew R. Bailey, executive director of the National Association for Biomedical Research.

Roughly 80% of all imported nonhuman primates used in scientific research in the U.S. come from China, according to the NABR. Monkeys are used to develop treatments for illnesses like AIDS, Ebola and Parkinson’s.

As demand for lab monkeys continues to rise, U.S. scientists are reporting delays in research projects because they can’t obtain enough animals, according to the National Institutes of Health.

Since most U.S. research projects are constrained by grant-dependent budgets, they would be unable to absorb a 5% to 25% cost spike for monkeys, according to the NABR. While some researchers will be forced to scale back projects due to the tariffs, others might cease U.S. operations and move research to China.

“The proposed tariff would hand China an even greater cost advantage, which will incentivize many researchers to conduct studies in China instead of the United States,” Bailey wrote in a letter to U.S. Trade Representative Robert E. Lighthizer.

For instance, when the U.S. restricted research on chimpanzees in 2015, research moved to China, where scientists obtained the primates for substantially less money — $1,500 in China compared with $6,000 in the United States, according to the NABR.

China is a big biotech competitor

While some of the monkeys are imported from Mauritius, Cambodia and Vietnam, not enough of them pass research standards in those countries to meet U.S. demand. Some U.S. researchers argue that they cannot develop treatments without the cheap access to Chinese primates.

The number of nonhuman primates tested in U.S. labs increased by 22% from 2015 to 2017, according to the Department of Agriculture. In 2017, U.S. researchers experimented on 75,825 nonhuman primates, mostly rhesus macaques, the Chinese- and Indian-derived monkeys with brown fur and a reddish-pink face.

Charles Roberts, a research director at Oregon National Primate Research Center, which has more than 4,000 primates, said that tariffs were less of a concern for academic research, and more of a problem for pharma researchers.

“The bigger picture is that in terms of utilizing nonhuman primates to make advancements in medical treatments, that momentum is shifting to China. They are putting huge investments in, whereas the U.S. isn’t,” he said.

“In China, they don’t have issues with animal rights extremists, whereas in the U.S. we are always justifying why we are using nonhuman primates. That has an effect on research, whereas in China they are not worried about that.”

In the U.S., there are seven federally funded U.S. primate research centers that are partnering with the National Institutes of Health. In the U.S., about two-thirds are rhesus macaques, but others study cynomolgus macaques, baboons and other species, according to the NIH.

The new tariffs come as primate research centers in the U.S. struggle to acquire live primates from China, facing intense scrutiny from animal rights groups and bans on transportation.

Harvard University shuttered its national primate research center in 2015 following an investigation into four animal deaths. That same year, the NIH ended funding for all invasive chimpanzee studies and said those animals were no longer needed for research.

The People for the Ethical Treatment of Animals, which advocates for animal rights, says it would like a total ban on monkey imports, or higher tariffs, in order to slow breeding in China. PETA has lobbied major airlines to stop transporting live animals for research, forcing some primate suppliers to use charter flights instead.

For animal rights activists, the potential for tariffs to slow down breeding in China and primate imports to the U.S. is a partial victory. But they point out that testing will inevitably continue, whether it’s in China or other countries with less restrictive research regulations.

“To the extent that tariffs prevent the shipment of monkeys from coming to the U.S., it’s a good thing, since it keeps the animals out of the laboratories,” said D.J. Schubert, wildlife biologist at the Animal Welfare Institute.

“But it won’t persist for an extended period of time,” he added. “The use of animals in biomedical research has moved from the U.S. — where labs think they are subject to restrictive regulations — to Asia, Latin America and Africa.”