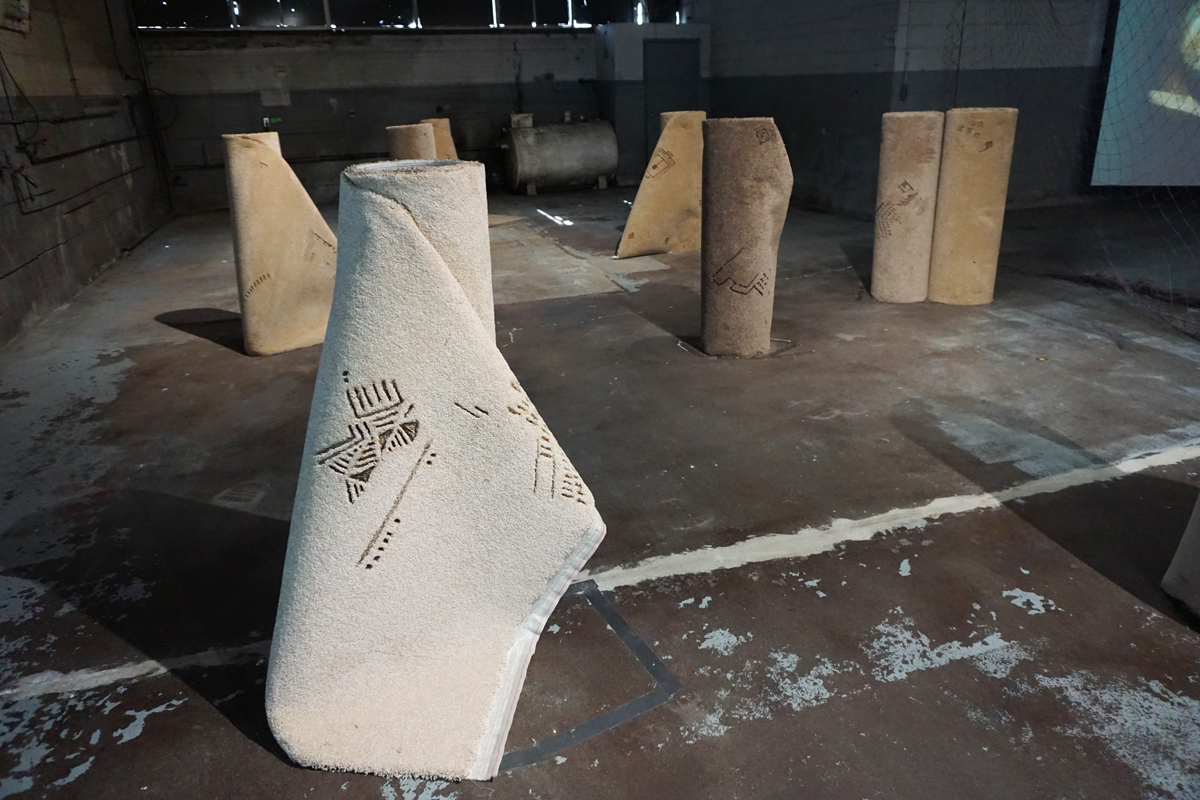 Hera Büyüktaşçıyan, Reveries of an Underground Forest, 2019, installation view, at 2019 Toronto Biennial of Art. MAXIMILÍANO DURÓN/ARTNEWS
The Toronto Biennial of Art, which will open its inaugural edition to the public Saturday and is currently open to invited guests, has named the two artists who will each win 20,000 Canadian dollars, or about $15,000—Abel Rodríguez, who is the first winner of the biennial’s Art Prize, and Hera Büyüktaşçıyan, who has won the Emerging Artist Prize.Rodríguez is a Bogotá-based artist and sage from the Nonuya ethnic group, which hails from the Cahuinarí River in the Colombian Amazon. The drawings by Rodríguez, on view in the biennial’s Small Arms Inspection Building venue in Mississauga, a suburb of Toronto, draw on the artist’s memories of his time growing up on his people’s ancestral lands prior to his displacement in the 1990s, during Colombia’s armed conflict.
Büyüktaşçıyan is an Istanbul-based artist who has on view tan-colored industrial carpets that are presented rolled up and freestanding. In them the artist has carved various small, slightly abstracted patterns that resemble a lost alphabet, aerial views of the disappeared waterways that have been filled throughout Toronto, or even migratory patterns.In a statement, Büyüktaşçıyan said, “I am extremely humbled to have been a part of this journey, which led all of the artists to dive into the depths of Toronto’s lost rivers and forests. They are a reminder of who and what existed before, and allow us to question the present through a different understanding of history.”The biennial also awarded an honorable mention to the artist duo Althea Thauberger + Kite. They will receive 5,000 Canadian dollars, or around $3,800.The jury for the prizes included Carolyn Christov-Bakargiev, the director of Castello di Rivoli in Turin, Italy; Mark Godfrey, senior curator at Tate Modern in London; artist Brian Jungen; Meg Onli, assistant curator at the Institute of Contemporary Art Philadelphia; and Kitty Scott, a curator at the Art Gallery of Ontario in Toronto.The biennial, which is curated by Candice Hopkins and Tairone Bastien, carries the title “The Shoreline Dilemma,” and explores the connections between the city of Toronto, its residents, and the shores of its main water source, Lake Ontario. The show presents work about the ways in which we—as individuals, as communities, as civilizations and societies, and as a species—exist in relationship to each other, the world, and the environment.