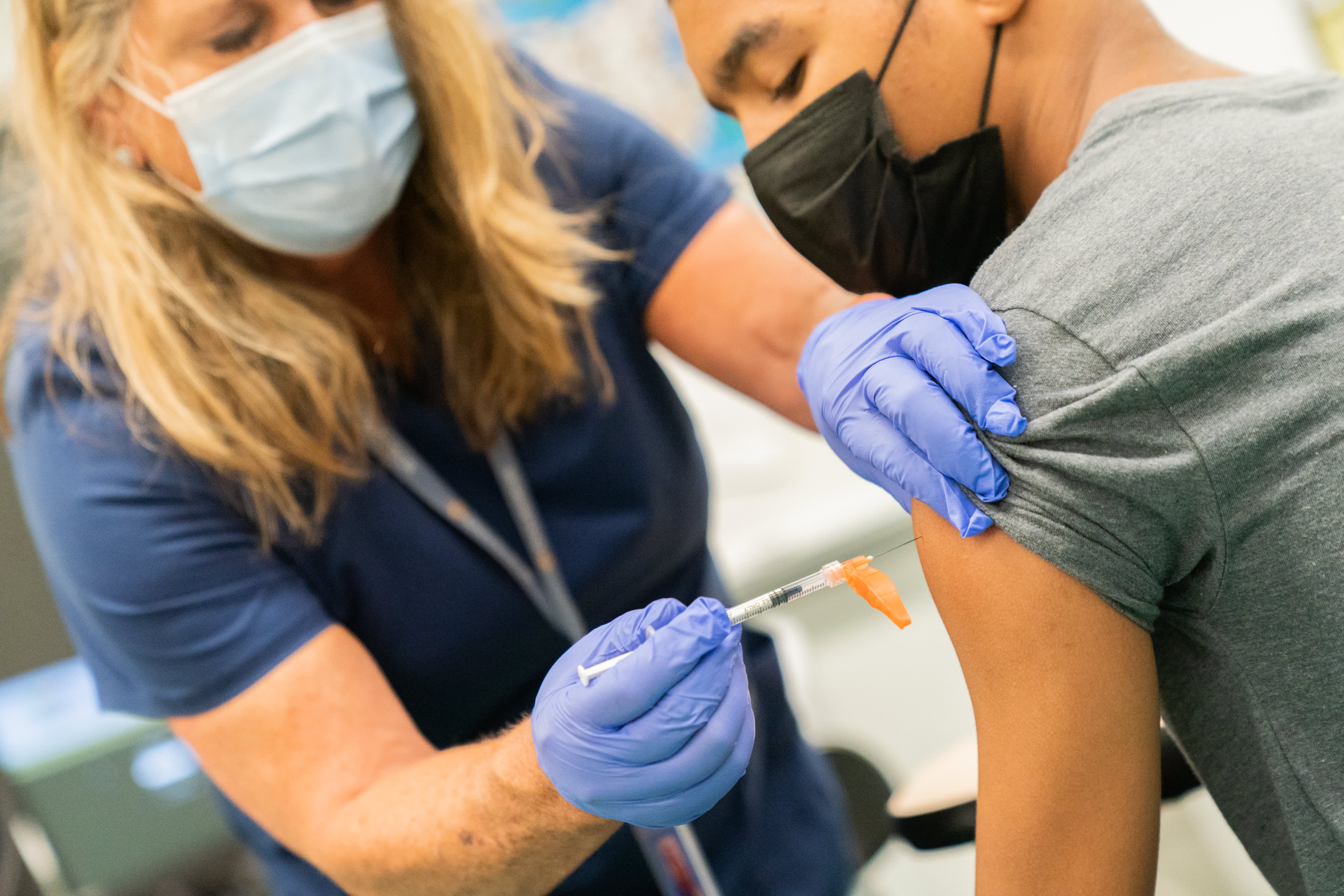 A healthcare worker administers a dose of the Pfizer-BioNTech Covid-19 vaccine to a student during a ‘Vax To School’ campaign event at a high school in the Staten Island borough of New York, U.S., on Tuesday, Aug. 10, 2021.Jeenah Moon | Bloomberg | Getty ImagesA recent surge of Covid cases in kids across the U.S. led the nation’s second-largest teachers union to back vaccine mandates for educators as schools prepare for in-person learning this fall, said Randi Weingarten, president of the American Federation of Teachers.”This is what really scares me: in the last three weeks, we’ve gone from the number of kids testing positive from 20,000 to 40,000 to 72,000,” she said, citing data from July. The number of kids who tested positive for Covid during the week ended Aug. 5 was even higher at 93,824, according to the most recent data from the American Academy of Pediatrics. Weingarten, who was speaking in an interview Wednesday with CNBC’s “Squawk Box,” said schools should give teachers time off to get the shots and allow for medical and religious exemptions for those who don’t want them.”Kids under 12 can’t get vaccines, this delta virus is very transmissible, so we need to be in school for our kids, with our kids, but we need to keep everyone safe,” Weingarten said. “And that means vaccines are the single most important way to do it, and the second way to do it is masks.”Approximately 90% of teachers are already vaccinated, Weingarten said during the interview, citing White House data. But with many children still ineligible for vaccination, Weingarten stopped short of advocating for an immunization requirement for students under 12.As the delta variant surges, states have begun enhancing their Covid mitigation protocols to prevent the virus from spreading among faculty and students. On Aug. 4, Illinois Gov. JB Pritzker introduced a mask mandate for all state students regardless of their vaccination status.New Jersey also issued a mask mandate for all students and staff on Friday, and Louisiana’s mask mandate for public indoor settings includes students from kindergarten through college.Becky Pringle, president of the largest U.S. teachers’ union, the National Education Association, told the New York Times last week that any vaccine mandate should be negotiated at the local level.Reuters contributed to this report.