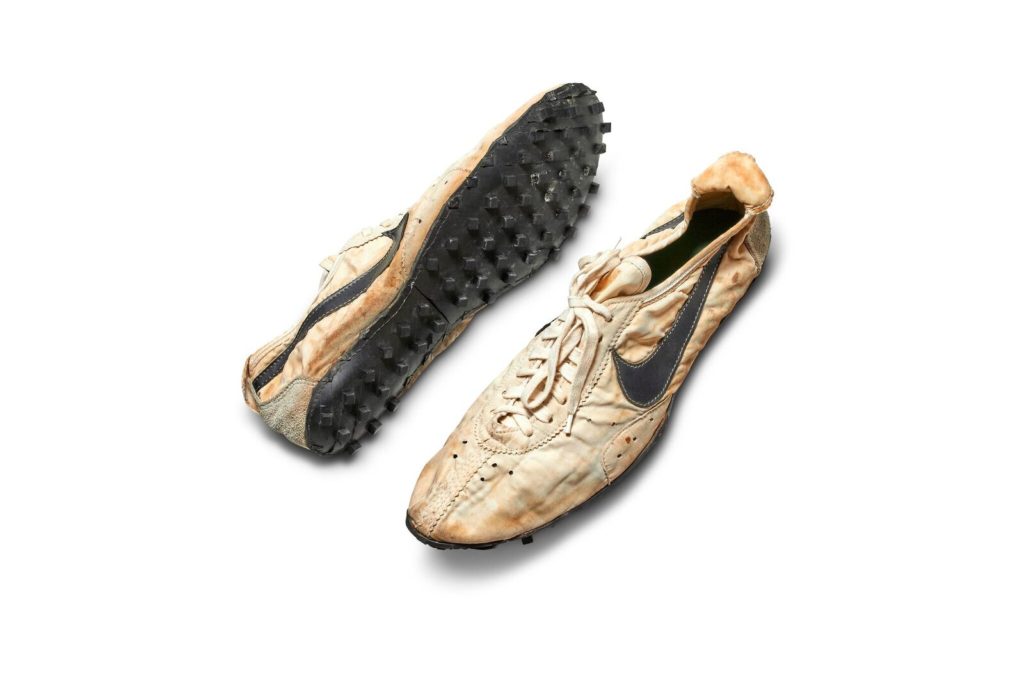 The record for the most expensive pair of tennis shoes sold at auction has been shattered with the purchase of the 1972 Nike Waffle Racing Flat ‘Moon Shoe’ for a staggering $437,500.

Previously, the most expensive pair of shoes were bought in auction in 2017: a pair of signed Converse that Michael Jordan sported during the 1984 Olympic basketball gold medal game that went for $190,300. Collector Miles Nadal blew that record away in Sotheby’s online auction yesterday, as bidding for the Nikes blasted over its pre-sale high estimate of $160,000.

Last week, Nadal bought the rest of the lot for $850,000 through a private Sotheby’s sale called “The Ultimate Sneaker Collection,” which consisted of 99 of the 100 rarest sneakers ever produced. The Nikes sold yesterday were kept aside by Stadium Goods, which curated the selection for the sale, so that they could sell publicly this week. Now that his collection is complete, Nadal plans to display them at his private museum in Toronto, Canada, according to Sotheby’s.

Nadal stated in a release, “I am thrilled to acquire the iconic Nike ‘Moon Shoes,’ one of the rarest pairs of sneakers ever produced, and a true historical artifact in sports history and pop culture. When I initially acquired the 99 other pairs in this auction last week, I just knew the Nikes had to remain part of this remarkable collection, and I couldn’t be happier with the result.”

Aside from sneakers, Nadal, a businessman based in Canada who founded MDC Partners and Peerage Capital Inc., is known as a vehicle collector, and has acquired over 142 cars and 40 motorcycles.

Speaking of collector priorities, Nadal said, “I think sneaker culture and collecting is on the verge of a breakout moment.”

Noah Wunsch, Sotheby’s Global Head of eCommerce, agreed with Nadal’s sentiment, adding, “The success of Sotheby’s & Stadium Goods Ultimate Sneaker Collection sale is a testament to the strength of this burgeoning collecting category.”