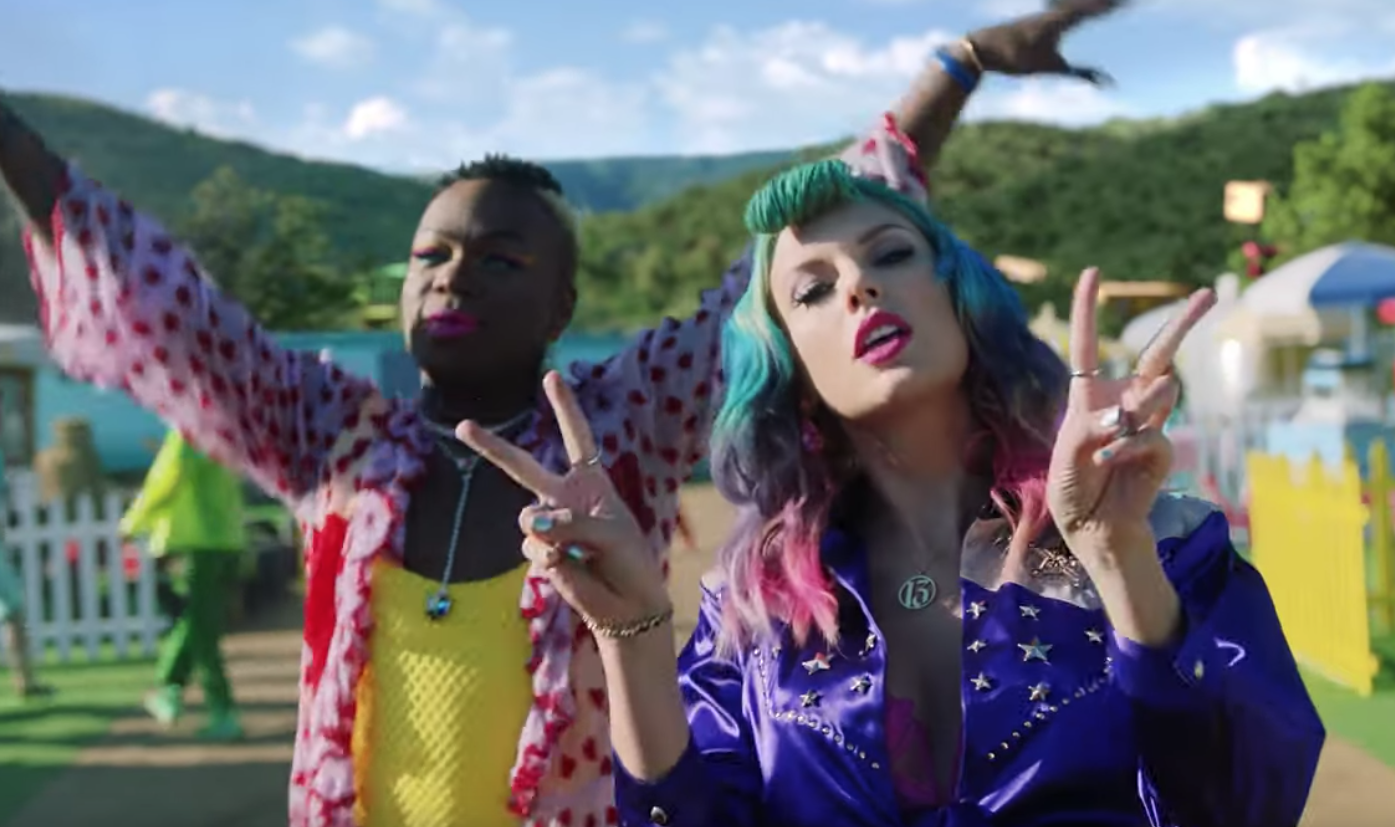 Taylor Swift in her music video for “You Need To Calm Down”.

The Gay & Lesbian Alliance Against Defamation saw a surge in donations hours after Taylor Swift released her latest music video “You Need To Calm Down” on June 14.

“Why are you mad? When you could be GLAAD?” Swift sang — a clear shoutout of support to the organization, which goes by GLAAD. The single, which debuted at No. 1 on iTunes, is a bedazzled pop tribute to the LGBTQ community just in time for Pride month. She’s supported the community in the past with donations to the Stonewall Inn and Tennessee Equality Project and has performed with outspoken lesbian singer Hayley Kiyoko at the Ally Coalition concert in 2017.

The song has drawn as much praise for openly supporting LGBTQ rights as criticism for leaning too heavily on stereotypes of gay culture to get her message across in the garishly colorful video. GLAAD saw a rise in donations almost overnight, some for a specific amount.

“We saw a large spike in individual donations start to come in quickly after the release of her new single, many of which were made in the amount of $13,” said Anthony Ramos, GLAAD’s director of talent engagement.

That number is significant to “Swifties,” the name for the singer’s loyal fanbase. Swift, who was born on Dec. 13, told MTV in 2009 it was her lucky number. Her Twitter handle is @taylorswift13 and she’s incorporated the number into some of her music. In the music video for “…Ready For It?” viewers can see the number spray-painted on a wall in the video’s background.

The singer, who has generally avoided politics in the past, has been growing increasingly vocal on a handful of issues she deeply cares about. She endorsed her first political candidates in October, Democrats in her home state of Tennessee, the day after her 2018 U.S. tour wrapped up.

“In the past I’ve been reluctant to publicly voice my political opinions, but due to several events in my life and in the world in the past two years, I feel very differently about that now. I always have and always will cast my vote based on which candidate will protect and fight for the human rights I believe we all deserve in this country,” she wrote on Instagram on Oct. 7.

Ramos said “GLAAD is really happy to have her on our side,” declining to say how much was raised following the song’s release. “Any amount that her fans donate is obviously helpful for us.”

He said Swift also made a “generous donation” to the group earlier this month, adding that it will use the funds for the organization’s “ongoing work to amplify stories as well as create campaigns that fight back against the current rise of hate and discrimination and also accelerate acceptance of LGBTQ people.”

Swift wrote to Sen. Lamar Alexander, R-Tenn., in a letter posted to her Instagram page June 1 asking for his support with the Equality Act, which would prohibit discrimination against LGBTQ people across a variety of areas, including employment, education and housing.

“For American citizens to be denied jobs or housing based on who they love or how they identify, in my opinion, is un-American and cruel,” Swift wrote.

“With her donations to GLAAD and with her lengthy and heartfelt Instagram post, she was able to get the Equality Act into many conversations during pride month, which it might not have been without the attention she brought to it,” Ramos said.

After its release, Swift’s song shot up the charts and sits at No. 6 on Spotify’s U.S. chart of most-played songs. The accompanying music video is a star-studded tribute to the LGBTQ community with appearances by Ellen DeGeneres, the cast of Netflix’s “Queer Eye,” openly gay performer Todrick Hall, American drag queen RuPaul, actor Ryan Reynolds and singer Katy Perry, among others. The final seconds of the video point viewers to Swift’s petition for Senate support of the Equality Act, which Democratic Sens. Elizabeth Warren, Cory Booker and Tim Kaine also support.

The video, which has gained over 55 million views on YouTube, has faced backlash from those who say Swift is capitalizing on being an ally without actually being an ally.

But Kevin Nadal, a psychology professor at John Jay College of Criminal Justice who studies the impact of discrimination on LGBTQ people, said “anytime a celebrity uses their power and influence to be able to advocate for social justice is such a positive thing.”

“Prior to 2016, many celebrities had been generally silent in fear of either alienating themselves, being too political or disappointing their fans,” Nadal said, adding that more celebrities have lately been using their voices on social media and getting involved in advocacy organizations.

Swift’s video comes at a time when some big moves are being made to elevate the voices of LGBTQ people elsewhere in entertainment industry. Last week, Netflix struck a deal with producer Janet Mock giving the streaming platform exclusive rights to her series and feature films — the first deal between an openly transgender woman and a major media company, Variety reported.

It’s this focus on people in the actual LGBTQ community that’s important, said Lisa Stulberg, a sociologist who studies LGBTQ social movements and is writing a book on the impact of pop culture on these movements.

“One of the things that people talk about with LGBTQ allyship is to make sure that you’re not putting yourself at the center of the narrative and that you’re making room for other stories and other narratives,” Stulberg said.

When it comes to celebrities, it’s especially complicated. They have a large platform so they can be effective, she said, but “they also need to figure out how to not take up too much space in the conversation.”

It’s important for Swift’s support to continue beyond Pride month, she said.

“It’s taken her a long time in her career to get to the point where she is willing to speak out politically, but we’ll see if it will lasts,” Stulberg said. “An important thing for allies is to stick around.”

Allergan, Berkshire Hathaway, FedEx, Tesla & more
Chevy is working on what could be the first pickup to top $100,000
To Top
error: Content is protected !!